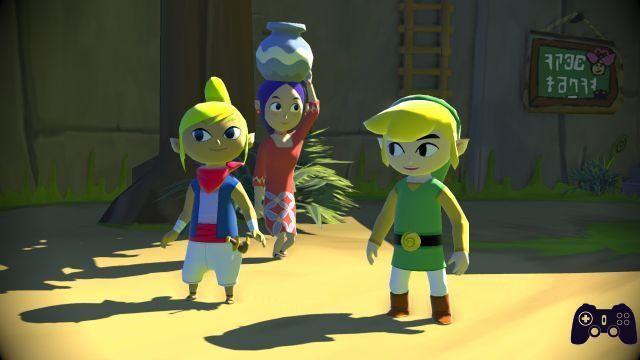 The Wind Waker it was undoubtedly one of the best-selling titles on GameCube, and it was also one of the most discussed chapters of The Legend of Zelda and that most divided fans between worshipers and those who did not consider it to be the same as the previous two in three dimensions.
This October, ten years after the release of The Legend of Zelda: The Wind Waker on GameCube, we will be able to get our hands on the HD version of the title, exclusively for Wii U.
On July 5th, Nintendo guests, among the chaos of new titles, we also tried this re-release in HD, savoring the new graphics and some news that we will show you in this preview.

The first phase of the demo takes place right in the first moments of the game. Causing severe bouts of nostalgia, the Primula Island, the birthplace of the young Link in Cel-shading, stands out on the screen.
You immediately notice a clear graphic improvement, due to the greater cleanliness of the textures, which make the whole environment even more cartoonish than it was in the original version.
As some of you will remember, the young hero discovers through the sweet granny that his sister is looking for him to give him the birthday present and then decides to go to meet her, unaware of the fact that all this will mark the beginning of a great adventure.
While we explore the beaches of Primula Island after ten years, we also notice the presence of Drakar, the talking boat that will accompany us throughout the game, stopped at the port, and the Wind Wand among the usable objects (it is still a demo, so even if in reality we will get them later in the final game, the possibility to browse was available in the test).

Messages in a bottle

Instead of taking to the sea, we focused on the polygonal models of the characters, also refined in this new version, and on the bottles scattered around the beach, containing the messages of Miiverse.
In fact, The Wind Waker HD will take advantage of Miiverse like most of the Wii U titles, in this case through messages in a bottle, which will be visible on the Gamepad and will show us drawings, tips and anything else published by the Nintendo community.
At the moment it seems there are no limits to the messages that we can collect on the various game beaches, even if there is the risk of finding the beach full of glass, given the amount of posts currently present in the Miiverse section dedicated to Zelda.
This feature replaces the connection with the Gameboy Advance present in the Game Cube version, but we still don't know if it will affect the presence of Tingle Island and its subquest.

The Big Sea on the small screen

One of the heaviest criticisms pushed to the original version of Wind Waker is certainly too much time spent at sea without being able to do anything.
Nintendo seems to have partially listened to the complaints, adding a command to make Drakar go faster, thus speeding up the crossing times. Honestly, we would have preferred they had added a few more dungeons scattered around the Great Sea, but we'll have to settle for it.
Like all the rest of the environments, even the sea has been cleaned up and adapted to the new high definition graphics of the title, and we are confident that thanks to the newfound speed, everything will be less boring than the original.
Obviously we will be able to choose to play completely on the Gamepad, without taking advantage of the home TV, but we will have to sacrifice inventory in real time, or rather give up being able to select objects without pausing the game.

In addition to the graphic aspect and these small innovations found in the trial version, we certainly expect some other small surprises this October, when The Wind Waker will return to the shelves, not as a mere port in high definition but as an HD version of the game for Game Cube .
It is not, in fact, a simple porting like the collections we have been used to in recent years, but a meeting point between the latter and a real remake of the game at the levels of Ocarina of Time 3D or Starfox 3D. .


Comment Finding myself again on Primula Island caused me a not indifferent nostalgia attack, but at the same time it increased my desire to see something new. The Wind Waker HD, will be an unmissable title for those who haven't played it at the time of GameCube, while for those who have already fleshed it out, it will be a good appetizer waiting for A Link Between Worlds on 3DS and the new Zelda for Wii U. Pros and Cons ✓ The new speed of navigation
✓ The colorful world in cel-shading x There are no new dungeons

Do you want to be a video game expert and know all the tricks, guides and reviews for your video games ? Holygamerz.com is a group of video game fanatics who want to inform you about the best tricks, guides and tips. We offer you the best information to be a reference in gaming, so here you can find guides, tricks, secrets and tips so you can enjoy your games to the fullest. Are you ready to get all the achievements of that game that you resist so much? Enter now and enjoy your favorite video game to the fullest!
Tech The main features of Linux and its advantages ❯

Add a comment from Preview The Legend of Zelda: The Wind Waker HD