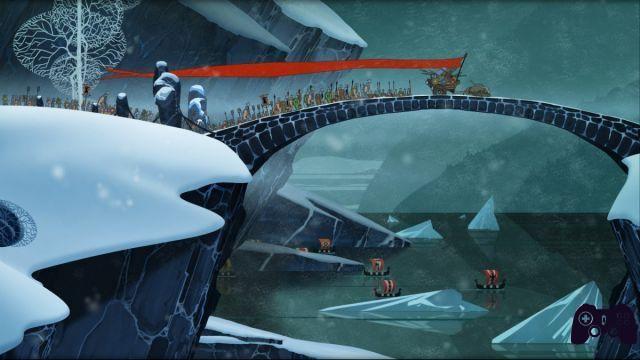 It is always a pleasure when a title presented on Kickstarter finally sees the light after months of development, on January 14 the time will finally come for The Banner Saga to surrender to the hands of avid gamers.
Thanks to a trial code lasting a total of four hours, today we can give you a preview of what the first great title of Stoic Studio, a trio of developers made up of Alex Thomas, Arnie Jorgensen and John Watson, former Bioware members known for their work on Star Wars: The Old Republic.

The Banner Saga will be a trilogy, which tells of the alliance between humans and Varl, long-horned giants, to defeat the Dredge, armored giants that threaten the vast lands of the Stoic Studio game. The narrative is one of the strong points of this first chapter, in fact between one battle and another we will have to make choices that will change the destiny of our heroes through interactive multiple-choice dialogues. The long dialogues that intersperse the actual gameplay are taken care of down to the smallest detail by Stoic studio, which leaves nothing to chance, and does not allow us to change our choices: once the story has taken a certain turn, we will not be able to go back, leaving complete freedom to the player on the continuation of the adventure.
Each new game can therefore differ from the past ones thanks to a different choice, which could change little things like extra supplies, but could also grant us new warriors to use in otherwise deranged battles.
According to what was communicated by Stoic Studio, the complete game can be finished in about 13 hours but this strong narrative component ensures a replayability of the title, thanks also to the medium-high level of challenge that puts everything in the hands and strategic mind of the player.

A bit of everything'

The whole story takes place in a vast map, in which we can move according to needs with our caravan, a real management component of The Banner Saga, which will allow the player to manage the resources of the group and the morale of their heroes, as well as raising those who will behave worthily in battle.
The focus of the game is represented by strategic turn-based battles, with over 25 classes of different characters, between Varl and humans, and as many skills, the player will be able to create a small army to counter the Dredge and any marauders.
At each turn, you can move one of the warriors according to their respective characteristics and weapons, on the virtual game board, when it is possible to attack the enemy, two values ​​will be displayed on the screen, one in blue, representing the defense, and one in red which it represents its life.
It will be up to the player to decide whether to strike or break the defenses, preparing brutal blows for the next turn, or immediately attempt a physical attack, depending on the power of the character used.
Should a warrior be lost in battle, depending on the severity of the injury, you risk the hero being lost forever in Norse Valhalla, otherwise he will have to rest in the caravan for a defined number of days before being used again.
Unfortunately, in the four hours of gameplay granted by the preview code, we encountered a role-playing component limited to rank up, without weapon customization that we hope will be introduced in the full game.

The graphic sector is certainly the flagship of The Banner Saga. The whole adventure offers majestic environments completely hand-drawn and characters characterized down to the smallest detail, as if we were watching a mature cartoon or reading the comic counterpart of Game of Thrones.
There were no slowdowns or drops in frames, and each battle feels enjoyable and fluid as if you were playing an AAA title and not an indie developed by three people.
The music is entrusted to Austin Wintory, a Grammy-nominated composer, and masterfully evokes the atmosphere of Norse legends, although listening is limited to the few tracks available in the test code.
The dubbing, on the other hand, is not very inspired, with ups and downs depending on the character that we will face, and for the moment the interpretation in some video sequences does not convince.

Comment The Banner Saga surprised me positively. The way Stoic Studio draws the player into the alliance between Varl and Humans is immediate and exciting. The possibility of being able to change certain events thanks to our choices and having to calculate every move in combat in order not to lose the heroes, manage to provide continuous entertainment for fans of the genre. The Banner Saga promises to be one of the best indie titles of 2014, and we can't wait to get our hands on the full version of the game. Pros and cons ✓ Excellent graphics compartment.
✓ Well balanced difficulty. x It will be necessary to see the actual "Depth" and "Longevity"

Do you want to be a video game expert and know all the tricks, guides and reviews for your video games ? Holygamerz.com is a group of video game fanatics who want to inform you about the best tricks, guides and tips. We offer you the best information to be a reference in gaming, so here you can find guides, tricks, secrets and tips so you can enjoy your games to the fullest. Are you ready to get all the achievements of that game that you resist so much? Enter now and enjoy your favorite video game to the fullest!
Until Dawn review ❯

Outriders Preview: It's just a demo after all