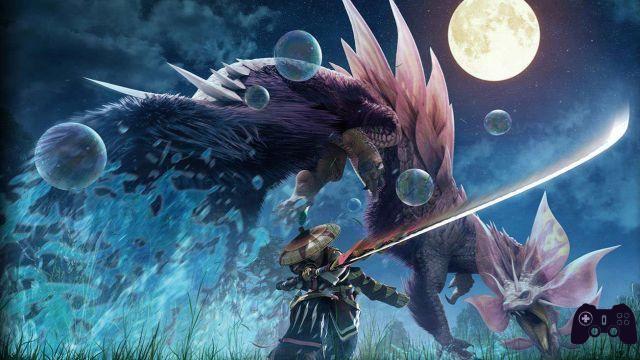 The legends tell the story of the "Eternal Hunter", a seemingly human being, made of flesh and bones as well as all beings of creation, but with the ability to reincarnate in a new body whenever the world needs to he. When a new monster appears to threaten the lives of many innocents, he runs to try to save them, but it does not present itself as an omnipotent being, on the contrary, it is apparently indistinguishable from any newbie who has just passed the hunter's exam. Where he differs from any other hunter is the steadfastness of his growth and his unwavering will to carry out his mission. Over the decades there have been many incarnations of this entity, first with the arrival of the Lao-Shan Lung, the 70-meter elder dragon, destroyer of fortresses, and gradually over the years, with every catastrophe, such as that of the Jhen Mohran or del Ceadeus, this figure appears, bringing the fame of the hunters' guild to its peak before disappearing into thin air.

But only we, my dear reader, know the truth ...

The meeting of generations

With the release of a new chapter of the Monster Hunter series, you are usually transported in the shoes of a young hunter to discover a new country, its neighboring lands but above all its menacing and mysterious creatures. This time Bherna is the city that will be the base for our operations, and as usual there will be our home, the mission assignment center, the blacksmith's and the merchant's shop, and finally the new “airship center”. The purpose of this small but important introduction is to be able to visit, with a lot of nostalgia, the villages present in the previous versions., including the snow-covered Pokke (MHFreedom 2 and MHFreedom Unite), the oriental Yukumo (MhPortable 3rd) for the first time, and finally the legendary Kokoto (Monster Hunter) where the brand was born.

Each of these 4 villages can be chosen as the starting point for offline missions, furthermore, as the game progresses, each village will face different problems, based on their geographical location, which will obviously require your help to be completed, in exchange for rewards. special (such as a new ingredient for the meal or new models of armor) and "village points", which, upon reaching various thresholds, allow you to unlock unique abilities and items of that city. Not only will the citizens of the village assign you these sub-missions, but characters from numerous other games in the series will often be encountered, a choice that manages to give long-time fans of the saga an effect of belonging to the game world even more. marked. TOEven with regard to monsters and hunting locations, the title can be considered a real meeting between generations.

How do I renew the brand for you

… But the Gameplay still evolves

The Monster Hunter brand, however, has been able to change very slowly over the years: in the original Monster Hunter for PS2 there were only 7 types of weapons (one of which was introduced only for the western versions) and the armor did not possess any skills, while now we have reached 14 "classes" of weapons and not only do we have armor capable of providing abilities, but in some of them you can insert gems capable of providing further abilities, and with the addition of the armor slot dedicated to talismans you they go to create even more combinations. It may therefore seem impossible to try to further improve this series that has done nothing but refine itself with each release of a new chapter, but the developers have surpassed themselves, with one of the most important and radical changes ever, the Hunting Styles and Arts.
4 hunting styles have been introduced: the basic one, "Gilda", Allows you to use the normal weapon move-set and equip 2 hunting limbs, while the other styles, in exchange for a reduced move-set and some limitations, provide various advantages, such as greater three-dimensional maneuverability or the possibility of equip one more Hunting Art. The Hunting Arts instead appear as bars visible on the 3DS touchscreen, each bar represents a different skill, which fills up more or less slowly based on the power of the skills themselves. Once a bar is filled it is possible to activate it, unleashing the hidden potential of our hunter, with effects that usually lead to inflicting huge damage to the monster on duty.

Cat you, what a cat me too!

Among other innovations that appeared in the MH Freedom Unite series, he had given the opportunity to hire Felyne, a race of sentient cats with anthropomorphic traits, to help us in battles. Usually their role was mainly of support, but it was possible to obtain, with the correct build, the "Felyne Companions" suitable for every role, even the combat one. In Generation, with a surprising move, has been given the opportunity to impersonate our favorite Felyne Companion, thus allowing us to exploit, with the due limitations, its unique abilities, such as the very useful ability to increase the bars of the hunting arts of neighboring hunters, or the more fun one of placing a trampoline to be exploited to reach the most high monsters or even to avoid some attack in flight. Of course, sacrificing the ability to use your character for a cat most of the time means reducing the amount of damage inflicted on a monster for a role more suited to supporting other hunters, but it remains a viable alternative, and in a certain way one. leisure, useful for breaking up intense hunting sessions.

Despite further minor improvements, such as a more developed armor reinforcement system, and a revamped and smoother weapon development system, Generations title has removed an important part of the gameplay, the famous "Rango G". The hunting missions of the previous chapters were divided into 3 important categories: Low Rank, High Rank and G Rank, as each rank increased, the locations presented materials to be collected gradually more rare and precious, while the monsters became increasingly difficult to defeat, and sometimes featured color variations that introduced unique new features or even new and more dangerous moves. In its absence, the classic variants have been maintained, also adding a series of new and original variants using an experimental "licensing" system, in fact, to deal with one of the new variants, a certain number of these licenses will have to be paid, which can only be obtained via street. -pass or by purchasing from a merchant Felyne at the cost of guild points. Only time will tell if the community will appreciate this variation, or if they prefer the return of the classic G-rank.

Verdict 9/10 Hunt that passes you! Comment Despite the lack of the G-rank, Generations remains a valid and completely renewed product, positively, compared to the canons set by the previous chapters, the new system of evolution of weapons and armor is much more fluid, and the arts and hunting styles give this chapter a breath of fresh air that the brand really needed. The introduction of the hunting game mode could make purists turn up their noses, but it manages to turn out to be unexpectedly fresh and fun. Overall, therefore, Generation remains a game that opens up both to veterans, who are unlikely to be tempted by novelties, and to new players, who will easily find a style of play that suits their tastes, Pros and Cons ✓ Very high Nostaglia effect
✓ Hunting Arts and Styles renew the brand
✓ New weapon evolution system x Hunting arts are not well balanced
x Hunting Styles are poorly explained
x Unexplained absence of the G-rank
Do you want to be a video game expert and know all the tricks, guides and reviews for your video games ? Holygamerz.com is a group of video game fanatics who want to inform you about the best tricks, guides and tips. We offer you the best information to be a reference in gaming, so here you can find guides, tricks, secrets and tips so you can enjoy your games to the fullest. Are you ready to get all the achievements of that game that you resist so much? Enter now and enjoy your favorite video game to the fullest!
Call of Duty: Modern Warfare Remastered review ❯

The Evil Within 2 review