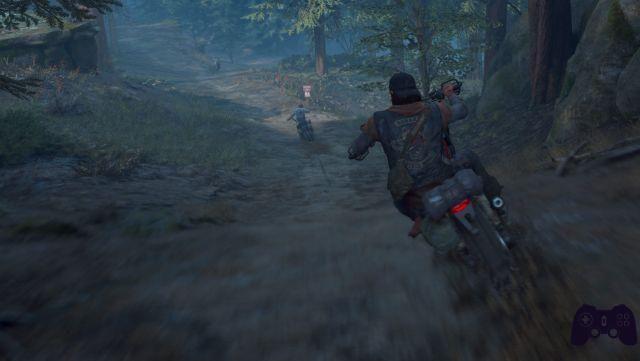 Driving the motorcycle and the American Dream, Route 66 and the hot asphalt, the roar of the engine and the leather jacket that flaps to the rhythm of the wind. A life as a Centaur, the life of those who worship freedom. Days Gone is the first, true pixel incarnation of this lifestyle, one milestone of the video game On The Road. What was Kerouak for literature, or Easy Rider for cinema, Days Gone is and will be the same for the video game. We are facing an ambitious experiment by Sony Bend Studio that certainly did not spare itself in building a gaming experience with a strong emotional impact and full of different approaches to game situations. 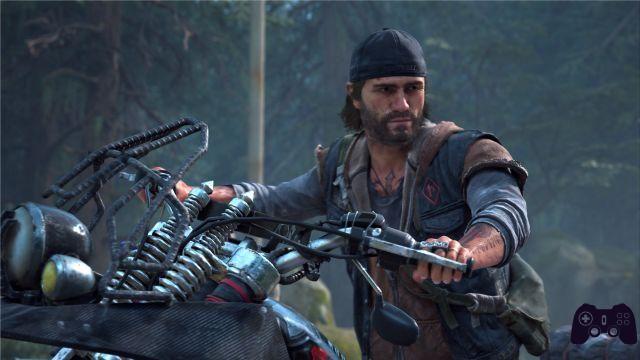 Deacon St. John, Deek to his friends, is a dark man in his thirties. A survivor, an outcast mercenary who lives without rules after the devastating epidemic that has turned a large part of the population into Furiosi, or Zombies for the purists. Deacon lives perpetually in the memory of a past life, lost, which torments him in every line of dialogue. A man with a thousand regrets, who in the end is only one: not having been next to his wife in her last moments of life.

The game steals totally ineffective the introduction of The Last of Us, the one that made us so fond of Joel in a microsecond. It's almost funny that both of the loved ones lost by the two protagonists during a Zombie epidemic are called Sarah. Days Gone's debt to the aforementioned Naughty Dog game is evident. From gunplay to the crafting system, passing through those harrowing scenes that only a world in danger can generate, it seems strange that Sony has accepted, and probably requested, some game features so similar to those of another of its exclusive.

I want to make it clear, though: The character of Deacon is infinitely more interesting than Joel and, in general, half of the male protagonists in the last 20 years of video games. We are faced with a real human being with a very detailed background as a motorcyclist, as a criminal in a gang, as a person madly in love and a little less madly loved. There is an extraordinary gap between Deacon and Sarah's personalities that works like sweet gorgonzola with chestnut honey. I would rather have seen as the first scene of the game one of those wonderfully realistic flashbacks that the game only offers after the early stages, like the one where Deek is reluctant to pick flowers for Sarah. Not really because of the toughness that he claims he has to defend, but basically because he is only afraid of breaking them. 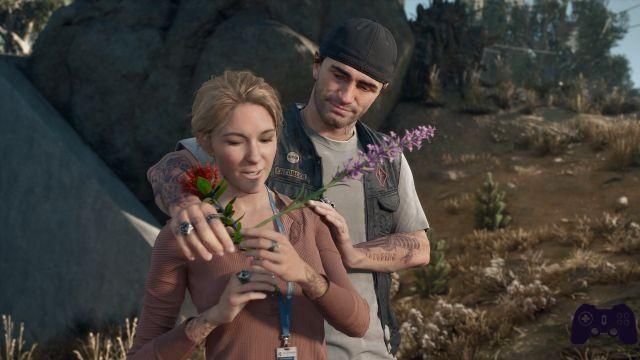 Unfortunately, on a narrative level, the real problem with Days Gone are those cliché scenes made on purpose to attract the general public or to convey emotions in a somewhat cheap way. It is clear that in a AAA game they are almost necessary, but they have never seemed more forced. The difference between the well-written scenes and the less interesting ones is evident and is perhaps the demonstration of how difficult it is to keep constant the progression of an Open World title with such high production values.

Days Gone, as you may have guessed, is a game of contrasts. For everything that works, there is one that works less well. For every mechanic introduced, there is always too little depth in its use. Yet despite a general lack of cleanliness, that of Deacon is an adventure that flows pleasantly for the duration of the game.

The day-night alternation is centric in the sandbox nature of the title. With or without sunlight, and depending on the type of enemies you are going to face, the approaches given to the player can be more or less effective. In general, being out of gasoline, at night, 5km from the nearest field, is a situation to be avoided, but one that tests the player in a healthy way and has, ultimately, created the most interesting situations during my playthrough. . Nonetheless, the game breaks down as soon as the gaps in the bad artificial intelligence of Furiosi and humans. From the moment AI's shortcomings come into the open, boredom is just around the corner during clashes, also thanks to a forgettable aiming system.

Being out of petrol, at night, 5 km from the nearest camp, is a situation to be avoided

Detail and care
Days Gone, in addition to having a respectable graphics sector, maintains high quality thanks to a great variety of NPCs, props of scene and vegetation. Too bad perhaps for the animals to hunt, they are really counted on the fingertips.

What turns out instead varied and dynamic it's the game world. Not only for the strong impact of the aforementioned day-night cycle, but for how the map is conceived in and of itself. Let's be clear, Days Gone has a strongly Survival imprint, but being in trouble is never too punitive to discourage the player. While playing, it is evident that this is due to theincredible world building work by the developers. The map is not exceptionally large, but it is much more functional than those of many famous headlines, often with inaccessible dimensions and untreated contents.

The real protagonist of the exploration phases is Deacon's bike, a custom hybrid between a chopper and a dirt bike. The feeling that returns into play, the perfect pad vibration, and the maneuverability are rightly a source of great pride for the production. It is a driving model away from the simulation, where falling is practically impossible, but the animations of the bike and Deacon at the guide they return a great feedback. The bike is also highly customizable, with liveries to unlock during the adventure, colors and serigraphs applicable to the bike and spare parts to improve its performance. 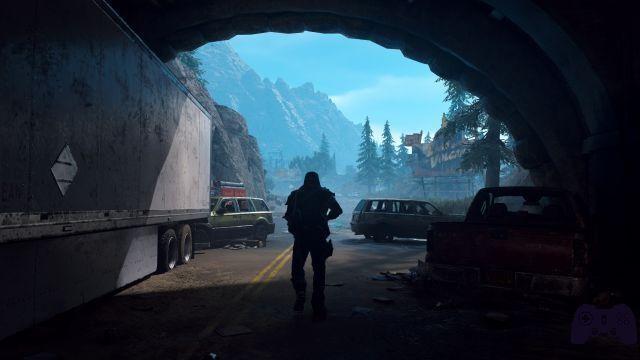 Days Gone is much more than a third person shooter with strong Survival elements. Days Gone is a game with a thousand gameplay drifts that can turn into a Horror Game or a Stealth depending on your needs. Also in this case, as often happens, quantity is synonymous with sometimes poor quality. In some ways, it can be said that Days Gone remains consistent with that stereotype of the Rough & Tough biker almost difficult to approach, but that, once appreciated for what it is, Has simple but incredible stories to tell for the triple of his years lived.

Verdict 8/10 A precarious balance on two wheels Comment The new Sony exclusive is finally out, although it has always remained a bit muted compared to its sisters. Yet Days Gone has been able to immediately carve out its share of the market. The problem with Days Gone is that it got a little wrong with the timing. If it had come out a year earlier it would have been an extremely innovative Open World. If it had been out in a year, a more refined game would have come out. Nonetheless, Days Gone is a particular and enjoyable game and will be able to exceed the expectations of even the most skeptical. Pros and cons ✓ The first real game on the road
✓ A rewarding guide
✓ Lots of variety ... x ... Often at the expense of quality
x Really cliché cutscenes
x AI of unspeakable enemies
Do you want to be a video game expert and know all the tricks, guides and reviews for your video games ? Holygamerz.com is a group of video game fanatics who want to inform you about the best tricks, guides and tips. We offer you the best information to be a reference in gaming, so here you can find guides, tricks, secrets and tips so you can enjoy your games to the fullest. Are you ready to get all the achievements of that game that you resist so much? Enter now and enjoy your favorite video game to the fullest!
News + AR glasses to project a virtual future ❯

Add a comment from Days Gone Review - Between Redemption and Individualism