Breath of the Wild special: the mischief is in the eyes of those who play 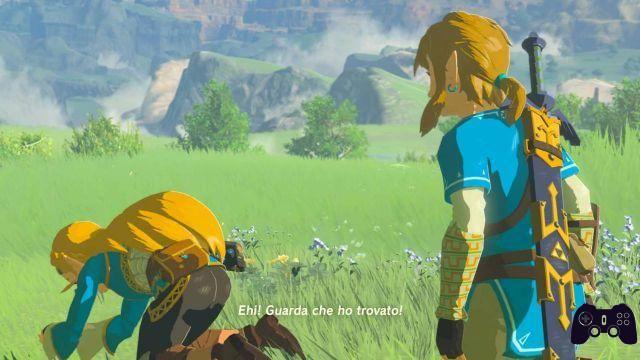 Despite the technological progress, the wandering on more or less mature themes, and an increasingly developed awareness of "modern" players, sexuality in video games remains a taboo, a tunnel in which the light of the exit always seems very far away, despite the efforts of some developers to include aspects of the sexual sphere in their games.
Among the various software houses of the current videogame panorama, Nintendo it has often come under the scrutiny of the censorship made in the Western versions of its titles. It is easy to recall such thorny issues as the bug that allowed same-sex marriage within Tomodachi Life, promptly buffered with a corrective patch, or the character editor of Xenoblade Chronicles X, which allowed you to increase the "sill" of your female avatar as you like. Nintendo's forced attention to its audience is also often linked to the now outdated belief that Nintendo "you create games for children”And to a certain bigotry of the various parental associations ready to prick up their ears and intervene in defense of children, as if by now, in the age of the internet it was really needed.

All this serves to introduce an important aspect of the new The Legend of Zelda: Breath of the Wild.
As we have seen, the new adventure of Link and Zelda completely revolutionizes every aspect that we have come to know and love over the years. Everything is deconstructed and reshaped to create one of the most beautiful adventures ever in the history of video games. There are many aspects that have been revolutionized in this new chapter and sexuality is also one of these aspects. 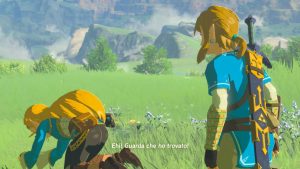 To learn more:
Breath of the Wild: the mischief is in the eye of the player

Warning, the article contains some minor spoilers related to the main story of Breath of the Wild.

In this new adventure Link has the opportunity to meet and get to know the most varied characters who, in one way or another, will help the brave hero to restore peace to the kingdom of Hyrule.

Arrived at the village of Finterra, not far from the inhabited center it will be possible to activate a sub-quest that will allow you to buy a house and set up a house in this charming rural village. To do this we should satisfy some requests of the architect who takes care of the works: Cerada.

Cerada immediately presents itself as an over-the-top, eccentric character with "sophisticated" clothing whose ways of doing suggest us a sexual orientation of an openly gay character. There are also several allusions during the exchanges between Link and the architect during the renovation of the house, which will make this secondary quest hilarious. 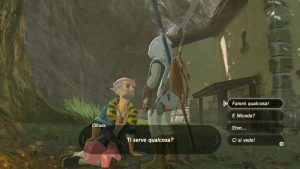 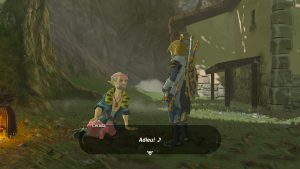 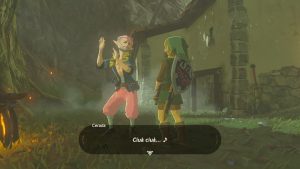 Breath of the Wild is a constant surprise and once you get to the village of Zora, we will become aware of the "hidden" feelings of Mipha, Princess Zora secretly in love with Link. In one of the flashbacks set 100 years earlier, at the time of the coming of the Ganon calamity, we will discover a certain attachment on the part of the fish girl towards the hero, and as will be explicitly told later, the love she feels for Link, bringing to light a sort of love triangle between Mipha, Link and Zelda herself. 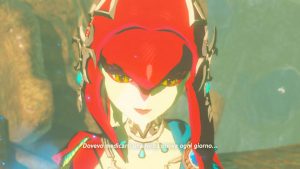 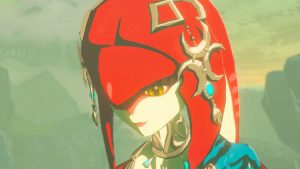 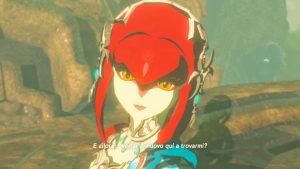 Link is a magnetic character, who in the course of her adventures has always attracted the attention of the various "heroines". In Breath of the Wild we can also witness a "bromance"Between Sidon and Link. Immediately there is a certain alchemy between the two, with Sidon, handsome and imposing heir of the Zora family, intent on stalking Link's feats before asking for his help, and then manifesting an almost maniacal attachment to the hero of Hyrule, denoting a much more marked storyline than the others relating to the main plot.


Forgive me just this once pic.twitter.com/GUGoIGfhyD

Even the fairies, one of the fixed points of the series, in this chapter they undergo a substantial makeover, focusing on a very physical sensuality, far from the stereotypes of the woman as an object, but not for this without losing its charm. Prosperous, with soft curves, sure of themselves and their body, the fairies of Breath of The Wild are not immune to the innate charm of Link, and they too offer us several more or less marked allusions, and nice curtains that, as the power of the fairies increases, will animate the process of strengthening the armor, stealing a loud laugh from us on more than one occasion. 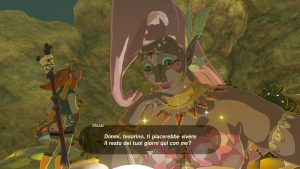 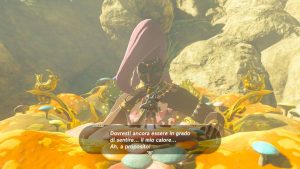 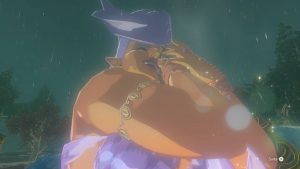 Worthy of the best campaign against the "gender" of the national Marione (hello Adinolfi), Link, arrived in the lands Gerudo will have to find a way to infiltrate the citadel of the desert amazons, where the male presence is strictly forbidden and punished. Here, he will be approached by a suspicious "woman" who will help him sneak into the village by providing him with skimpy women's clothes, only to discover that she herself is a man.

In addition to being able to keep up the pace splendidly, with excellent comedic timing on the construction of this scene, Link's disguise will have hilarious implications, so much so as to create confusion in a poor Goron, who after admitting to having met a person, will appear perplexed as to whether this could be a man or a woman. 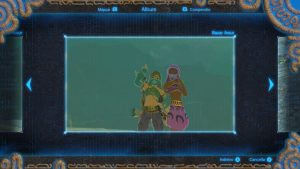 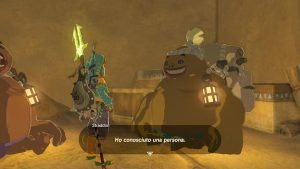 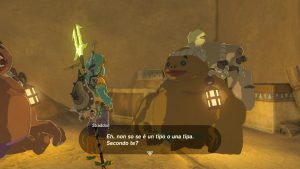 The Princess and the Pea

Last but not least you, Zelda. For years the almost silent protagonist of a saga that bears his name, only in the last chapters have we seen her more involved. Here, in full phase "girl power”, We are facing a revolution of roles. In the hundred years leading up to Breath of the Wild, it is introduced to us a growing character, strong, but at the same time unstable and fragile, which bends in the face of its limits but not for this, as "history" teaches us, it gives up in the face of adversity.

In the various flashbacks that reconstruct Link's memories, there is one that struck us most. Between a cry and fears of the Ganon calamity, we find a more carefree Zelda during a relaxed moment in the company of Link, who after showing him different sides of herself, she is ready to make him discover an interesting side B too, complete with a strategic shot and ambiguous reflections on Link's ability to use his sword. And who wants to understand understand. 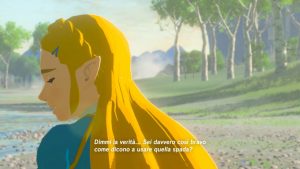 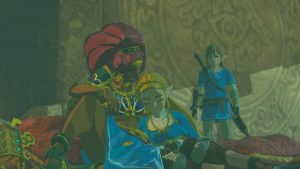 Whoever forgets is an accomplice

The Legend of Zelda, however, is not new to surreal and sexually ambiguous characters, or to strange jokes where malice reigns supreme.
Of all it is right to remember Tingle, the creepy map vendor who first appeared in Majora's Mask and causes the nightmares of thousands of players with her skintight green onesie and winking poses.

Still on the subject of suits that leave little to the imagination, an honorable mention goes to Ghiraim, the theatrical villain of Skysward Sword obsessed with the link figure for which he has a strong attraction, demonstrated in the course of the game on more than one occasion.

Transvestism is also nothing new in the series, and Sheik it is perhaps the best example of this. One of the iconic figures of Ocarina of Time, Sheik is none other than Zelda herself, who escaped from the clutches of Ganon, will help the Link of the future by disguising herself as a member of the Sheikah tribe and helping Link in his mission. 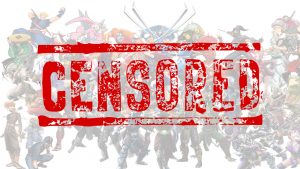 To learn more:
Censorship in Video Games: between Problems and Solutions

And you? What mischievous anecdotes from your travels do you have to tell? Write it to us in the comments

Do you want to be a video game expert and know all the tricks, guides and reviews for your video games ? Holygamerz.com is a group of video game fanatics who want to inform you about the best tricks, guides and tips. We offer you the best information to be a reference in gaming, so here you can find guides, tricks, secrets and tips so you can enjoy your games to the fullest. Are you ready to get all the achievements of that game that you resist so much? Enter now and enjoy your favorite video game to the fullest!
News Transference: new trailer from the Ubisoft E3 2018 conference ❯

Add a comment from Breath of the Wild special: the mischief is in the eyes of those who play