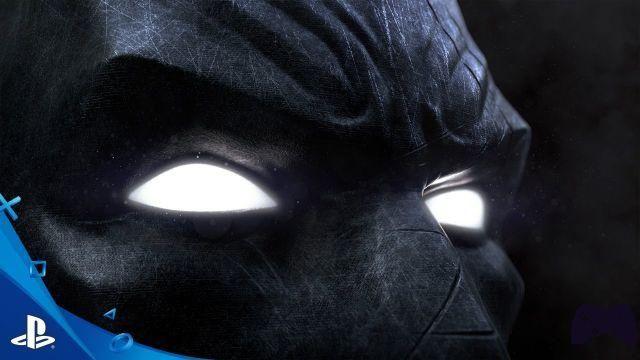 If there is a reason that has allowed Virtual Reality, cyclically, to return to propose itself on the market despite (so far) not encouraging results, it is the fascination that this technology exerts on people: we all know that most likely in real life we ​​would not be never super heroes, we're not going to hunt aliens into space or drive mechas. Thanks to Playstation VR, however, on the occasion of the Gamescom 2016 (and under the kind invitation of Warner Bros.) we tried it in preview Batman Arkham VR and impersonated the Dark Knight for about ten minutes.

The demo made available to us allowed us to play two different sections of the game. The first, simpler and designed as a sort of introductory tutorial to the mechanics of the title, made us experience firsthand the transition from Bruce Wayne to Batman: after operating the secret passage that leads to the Batcave along the descent, we became familiar with the controls (the title falls into the category of Playstation VR games that requires two Playstation Moves to work), wearing a mask and armor and equipping the three tools available to the hooded crusader on our belt. The classic Bat-grapple, a sort of remote control useful for facing the detective phases included in the game and the iconic Batarangs, with which we were able to become familiar with test launches towards fixed and then mobile targets (with an assist from the game in the second case, to correct the trajectory of the shot). The controls felt decidedly responsive to us, and unlike (for example) what we experimented with Fairpoint (which we will talk about in the next few days), we had no particular problems in matching our real action with the correspondent in the virtual game world; we were able to easily hang the gadgets on the belt of the costume (also thanks to the fact that the "area" in which to attach them was well marked on the screen) and to continue on to the next section. Obviously, the scene winked heavily at Bat fans (who are probably already looking forward to trying this experience), but it must be recognized that if the goal was to drop the player in the role of Batman this was undoubtedly hit. great.

The number one detective in the world

The second part took us on the field to investigate, with exciting results

The second part of the demo was dedicated to a field investigation: finding himself in front of the corpse of the faithful assistant Nightwing in an alley, Batman is forced to try to understand what happened and, above all, who killed his friend. To do this it was possible to move along the crime scene in three dimensions, by framing the appropriate icons with the superhero symbol and pressing the trigger on one of the two Playstation Moves. Scanned the body with the special gadget, the most directly playful part began: in essence we witnessed the last moments of Nightwing's life, and identified the most serious injuries on the body, the remote control reproduced the struggle between victim and executioner. Basically, at this point, it was a question of stopping the action every time one of the wounds listed at the beginning was inflicted on the first Robin, in a sort of "quick time event with actions" which on the one hand kept our attention and on the other hand he made us enjoy the fight between the two as if we were on the spot (it happened that after a particularly spectacular jump by Nightwing this passed over our heads, making us turn the shot). Obviously, there was no lack of the possibility of performing a rewind, rewinding the action to review the salient features of the whole or simply because one of the injuries was lost. In the end, we identified the presence of a witness at the crime scene, and with the same technique we identified the moment in which he put his hand on the wall to be able to take his fingerprints and identify him (discovering a link between the henchman and the villain Penguin). While waiting to understand if the playful focus of the title will be linked to pieces of investigation along these lines or if instead there will also be some more action sections, for the moment, however, we can be satisfied with what we have been able to see: these phases work, exploiting the identification granted by the Sony viewer and proposing something new, even if derived from mechanics to which players are already accustomed.

Comment Batman Arkham VR has left us even more convinced that Virtual Reality is now around the corner: the experience galvanized us, first dropping us in the right atmosphere with the descent to the Batcave and then breaking completely in the second section of game, where we were able to conduct the investigation as the Dark Knight. Waiting to understand if and how it will also be possible to "lead hands" in the role of Batman we are promoting the title, and we are really looking forward to having more. Pros and cons ✓ We were Batman
✓ Almost total identification
✓ Investigations work ... x … Now we want to see the fighting

Do you want to be a video game expert and know all the tricks, guides and reviews for your video games ? Holygamerz.com is a group of video game fanatics who want to inform you about the best tricks, guides and tips. We offer you the best information to be a reference in gaming, so here you can find guides, tricks, secrets and tips so you can enjoy your games to the fullest. Are you ready to get all the achievements of that game that you resist so much? Enter now and enjoy your favorite video game to the fullest!
Etrian Odyssey Untold: The Millennium Girl review ❯