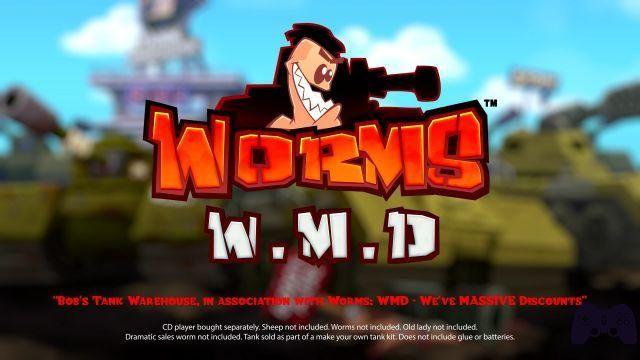 Two years after the last Worms: Battlegrounds, Team17 prepares to celebrate the company's 25th anniversary with a new chapter in the historic turn-based strategy series, which in 2016 celebrates its 21st birthday. Announced in that of Cologne at Gamescom 2015, Worms WMD will resume the (dis) adventures of the dynamite and warmongering worms, getting much closer to Worms: Armageddon than the following chapters of the series, and already promises to introduce a series of new features to renew the gaming experience offered by the development team.

Worms WMD will be available in full form for PC, PlayStation 4 e Xbox One starting from 23 August 2016.

Barring a few minor deviations from the path with the 3D chapters, the Worms series is known for using an extremely light graphics engine, with a form of cel-shading that makes the whole game experience pleasant to see and smooth to play. Worms WMD it makes no difference: taking up the style of the previous chapters, Team17 has populated its latest creation with colors and shapes more than familiar to longtime fans of the series, giving the whole overall the usual sense of pleasant familiarity that characterizes each new episode.

Sense of familiarity that is also reflected in the attention to detail and the environments: although the style has remained substantially the same, in fact, the game maps are already extremely accurate and full of decorative elements, whether they are inserted as an obstacle to the movement of worms or as real gameplay elements. As always, explosions and light effects are the masters for much of the time spent on the battlefield, pouring into the overall experience a whirlwind of colors and sounds that the most loyal fans of the series have come to know and appreciate to the full. . 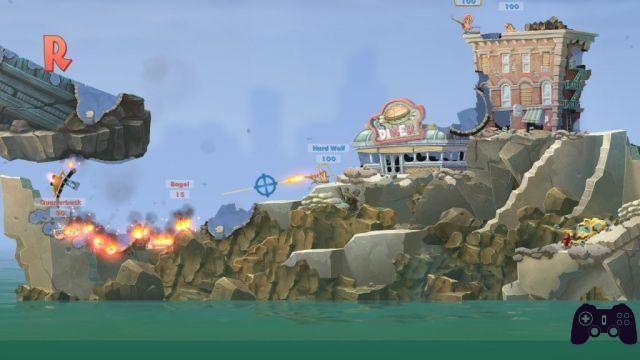 And it is also the sound sector in general that bodes well for the final version of the game: thanks to a set of very high quality sound effects, every clash in Worms WMD transforms into an incredible audiovisual experience, able to entertain the player from start to finish and to do justice to all the most successful chapters of the series.

However, it is on the technical side that the first compatibility problems with less advanced hardware were found, which occasionally prevented the game itself from starting. Trust is in the hands of the developers, already aware of the problems with some minor graphics cards and already working to fix them with the final version.

If on the technical side the changes to the graphics engine were not too significant, it is on the gameplay that Team17 has focused to a much greater extent, introducing new mechanics to ensure greater variety in the course of battles. Among the new features, one of the most interesting is certainly the crafting system: Provided they have the right amount of assembly materials in their inventory, players will be able to build virtually any tool present in the weapon panel, even during enemy turns. This seems to add a high degree of difficulty to the various battles, effectively allowing each individual player to adapt to different situations and their own personal play style. 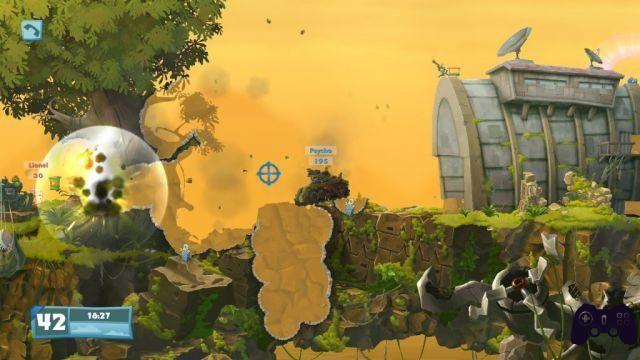 Then they stand out the vehicles (helicopter, tank and Mecha), an absolute novelty for the series that will be transported randomly on the battlefield along with the crates of materials and weapons. Of the three modes of transport (and destruction) introduced in the game, the helicopter appeared to be the most complex to steer, either with a controller or with the simple computer keyboard; the flight, in fact, is still very imprecise, making the player who wants to position himself quickly lose precious seconds to finish his turn successfully. It is difficult for the aircraft's control system to be completely revised before the final version is released, but hopefully the developers will at least find ways to improve its maneuverability.

Finally, it is impossible not to mention the addition of devastating turrets, buildings (which will allow you to shelter from enemy blows) and a large number of new tools of destruction (each weapon in the panel will have at least two variants to choose from when crafting), that help to diversify the experience from battle to battle and make any confrontation essentially unpredictable. 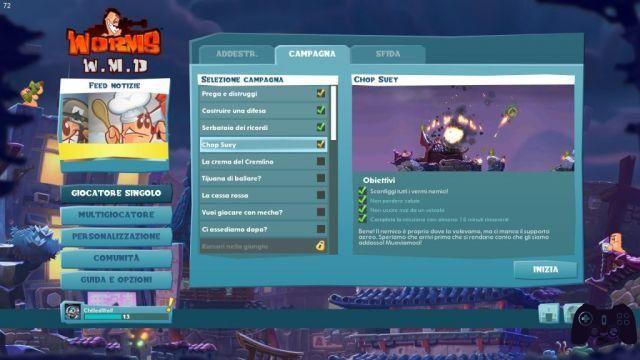 The control system has also seen a number of changes, with a new scheme that older players will be able to choose to adopt (not without some effort). Fortunately, for the more traditionalists, the game allows you to switch to the classic scheme typical of each past chapter of the series, making everything much less traumatic for Worms veterans; in any case, whether you choose the traditional scheme or the modern one, Worms WMD it is perfectly enjoyable already at this stage of development regardless of the peripheral chosen to play (be it a keyboard or a controller), and the premises can only be good as regards the final product of the historic British development team.


In addition, to incentivize the Pre-Order Team17 will offer the so-called "All-Stars Pack"To all users who decide to purchase the game in advance, providing masks and weapons taken from a large number of other titles on Steam and consoles (including Broforce, Pay day e Team Fortress). All that remains is to wait until the end of August for a definitive evaluation of a product that, at present, already promises to be an excellent title in the Worms series.

Comment Team17 once again immerses its beloved and historic worms on the battlefield, equipping them with a large number of new weapons and tools of destruction than ever before. Already at this intermediate stage of development, Worms WMD is perfectly enjoyable despite some technical problems and a slight inaccuracy in the handling of a couple of vehicles; on the whole, however, the conditions for a success of the title are already there, both as regards the artistic sector and for the incredible variety that it seems to want to guarantee compared to the past. The introduction of vehicles, buildings, turrets and crafting already promise to make battles far more diverse and unpredictable than ever before, increasing longevity in a series that seemed to have already tapped much of its potential. The appointment is therefore for August 23, when the final version of the game will allow you to give a much more detailed overall evaluation. Pros and cons ✓ Technical side cleaner than ever
✓ Lots of new features, including vehicles and weapon crafting
✓ More varied gameplay than in the past
✓ Usual Worms-style humor x Still some technical problems
x Difficult helicopter to maneuver
Do you want to be a video game expert and know all the tricks, guides and reviews for your video games ? Holygamerz.com is a group of video game fanatics who want to inform you about the best tricks, guides and tips. We offer you the best information to be a reference in gaming, so here you can find guides, tricks, secrets and tips so you can enjoy your games to the fullest. Are you ready to get all the achievements of that game that you resist so much? Enter now and enjoy your favorite video game to the fullest!
The Suicide of Rachel Foster review: when you play video games in the hotel with anxiety ❯