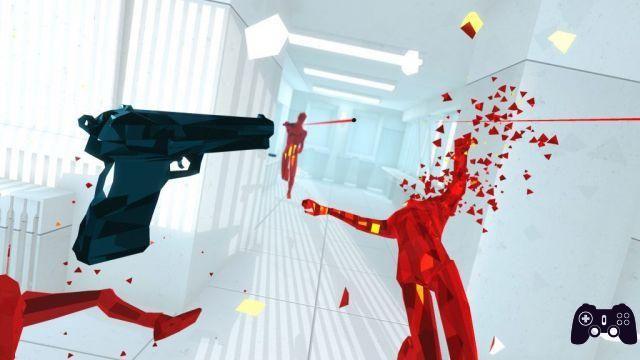 1 year ago we asked ourselves how much such a title, which seemed born and designed for virtual reality given the issues it brings with it, could work in that area. Today we have the answer.

superhot it was without a doubt one of the most interesting indie titles of last year, which combined innovative gameplay with a good level meta-referential narrative, giving life to something unique in its genre by borrowing the dynamics from classic FPS, deconstructing them and influencing the time factor, in a sort of first-person puzzle game, where every single mistake means game over. A year and a little more after its release on Steam e Xbox One, SUPERHOT finally lands on consoles too Sony, also bringing with it a pleasant surprise, SUPERHOT VR, revised and corrected version of the original, designed for virtual reality devices, in this case PlayStation VR.

Available from 19 July at the price of 24.99 € (or in a much cheaper bundle with the original title) let's discover together this new virtual adventure of the SUPERHOT team.

SUPERHOT is a title that fascinates for its essentiality

When we found ourselves trying SUPERHOT for the first time, we were fascinated by its essentiality. A conceptually simple title that reflected this simplicity on equally basic but functional gameplay for its purpose. Every single movement of our character represents an action of our enemies, moving means making time flow, giving life to the environment that surrounds us, carrying out our mission. 1 year ago, satisfied with the result obtained by the SUPERHOT Team, however, we wondered how much such a title, which seemed born and designed for virtual reality given the issues it brings with it, could work in that area. And today we have the answer.

SUPERHOT VR is not a simple revival of the same game, but a careful reworking of those mechanics to marry properly with the joys and problems of VR. Compromising is therefore one of the first steps in this operation, and to do so, various aspects must be kept in mind, such as identification in the game or the hassles associated with motion sickness. Although Superhot was basically a thoughtful title with limited movements, the choice of the development team was to eliminate them in its entirety, immediately avoiding any unpleasant effect related to moving in virtual environments. Via the movements, via the pad, choosing the way of the double PS Move, to identify the player even more in the part. Now in Superhot VR we will have to complete sequences while remaining still in place, with the ability to control our body by moving it to avoid enemy bullets and respond to enemy fire by taking up the weapons that we will find in the surrounding environment. Even at the level of history we find strong changes, where the original offered a simple but effective narrative track, here we are faced with a brazenly arcade title, which decides to sacrifice certain productive values ​​in favor of others. So the shape changes, but not the substance. Rather.
This new vision of SUPERHOT manages to fill what the progenitor lacked: total identification.

Once we put on the PS VR helmet we will no longer be playing a simulation, but we will be directly inside the simulation.

In front of us the white and aseptic world of SUPERHOT will open, from which one of the enemies of the game hides behind every corner, ready to kill us, but only to our movement. As before, the shares will be calculated to the millimeter, and it will be necessary to take our time before deciding what to do, otherwise we will have to start the whole sequence all over again. The ammunition will always be few, and we will have to think quickly on the strategy to use, who to kill first, taking the right sequence without ending up victims of our own actions. We are now like a track-based shooter, although the transition between the various areas of the level will only take place when we have killed all the red dummies in front of us. PS Move becomes an extension of our body, our virtual hands, and with them we will be able to grab the objects close to us and which will be displayed with a different pattern, to indicate that we can take them.

The sequences turn into a kind of tribute to the action genre, with moments that recall some of the most famous hard boiled films or, better still, daughters of the Matrix and the former Wachowskis. While hard to describe as it is a very personal feeling, imagine yourself in the middle of a Mexican stalemate. In front of you an enemy who is keeping you under fire, and all around other enemies ready to riddle you. All completely still, firmly stopped in time. As soon as you make the first move your nemesis will not hesitate to explode the first shot, and by slowly marrying to the side we will be able to avoid it, seeing it pass in slow-motion in front of our eyes and hearing the whistle of the bullet hissing in the ear. The scene continues with us grabbing a knife, cutting in 2 some bullets ready to hit us and taking out the enemy, then grabbing the gun he was previously holding in flight, quickly aiming it at the rest and firing. Every single action will make you excited, it will make you feel that Keanu Reeves (of Matrix, Or of Jhon Wick the choice is yours) that in everyday life we ​​will never be.

In short, a "fucking" war machine.

The first moments inside SUPERHOT VR are alienating

The first moments inside SUPERHOT VR are alienating and being in this new world will force the player to abide by all its rules. Not only will we be slaves of time again but in this new virtual guise we will also have to respond to the physics related to throwing objects, such as ninja stars or bottles. If in SUPERHOT this action took place in a fairly automated way, taking the object in question, pointing it at an enemy and throwing it with the press of a simple button, here things get complicated.how much the player will have to replicate the gesture with pinpoint precision, hoping that once thrown it reaches its destination hitting the target. Physics therefore, as well as knowing how to manage proportions in 3D space, is one of the limitations of the game and perhaps, of this technology that still needs study and experimentation, in some cases making this action frustrating and counterproductive for the purposes of the game itself.
Another problem always arises from the limitations of technology. SUPERHOT VR takes a lot of space to play properly, and the PS Camera, indispensable for mapping the room and the play area, often does not always succeed in the task causing annoying flickers of the image in an attempt to resynchronize the game with the environment or making it difficult to collect some objects, leaving us helpless under enemy fire while trying to grab them.

Overall, however, if we exclude these smudges SUPERHOT VR is a title that works perfectly in this new guise managing to leave no room, in some way, for that cyclical monotony that occurred in the original, and once completed the 19 Levels available (all in about 2/3 hours) you will surely feel the need to want more.
This is helped by the game options that we will unlock once the main adventure is completed and that follow those present in the "normal" version: mode Endless, in which to face enemies to the bitter end, Speedrun to test your nerves trying to beat the proposed records, a precision one dedicated to headshots and another where we will have to be careful never to die. 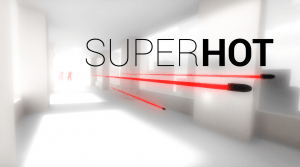 As we have said, even though it is not the same game, SUPERHOT VR incorporates all (or almost) of its main aspects in full. Once the movements in the environment have been eliminated, the movements will be carried out through the body (more precisely through the head tracking id PS VR), and received by the game in an impeccable way, as well as our virtual hands, represented here by the PS Move, will allow us to intuitively grab weapons and throw objects, almost always without problems.
Always through the viewer we will be able to admire the various locations, exploiting in various cases also some structural elements as a shelter from enemy blows. It is possible to find some of the settings already visited in the first title, now in much more uncomfortable situations than in the past. The lowpoly world of SUPERHOT finds a second life in this virtual space thanks to the cold and bare environments, as well as to the enemies composed of a handful of polygons. Seen through our eyes now the trails of bullets or the explosions of shattered objects are enriched with a scenic value that was lacking in the past., and often and willingly you will be staring at them open-mouthed, just as you will exalt yourself by completing a sequence without the slightest error waving around the room and waving in replicating all the appropriate actions.

Compared to SUPERHOT, here the lowering of resolution due to the use of PS VR involves the presence of annoying jaggies, present on both the 3D models of the enemies and the level. In general the image is dirtier, almost grainy, but after a few minutes the eye will get used to this new look and you will think about something else.
Excellent 3D audio support which also contributes to completely immerse the player in the world of SUPERHOT VR. The almost total absence of music, in favor of ambient sounds, absolutely does not represent a counter, on the contrary, it further contributes to making us feel part of the game.

Verdict 8.5 / 10 SUPERHOT at the end of July is a spoiler of the heat that you will experience playing with VR Comment With SUPERHOT the SUPERHOT Team succeeds in the task of reinterpreting their "classic" in a new and functional formula that embraces the world of virtual reality. Once you put on the helmet it will be like taking on the role of a new Neo, performing actions capable of satisfying your ego with scenic results capable of rivaling the same "chosen" of the Matrix films. SUPERHOT VR somehow improves its being in this new form, and despite some problems related more to the technology behind it, rather than to real gameplay choices, it represents one of the most convincing virtual reality experiences to date. Perhaps the price does not help for the few hours that it will be able to entertain you, but if you are a SUPERHOT virgin, the bundle containing the first title is the right purchase for you, worth every single euro requested. Pros and cons ✓ New reinterpretation of SUPERHOT
✓ Total identification
✓ Perfect VR experience x Launch dynamics to be reviewed
x Requires 2 PS Move
x High price for the single package
Do you want to be a video game expert and know all the tricks, guides and reviews for your video games ? Holygamerz.com is a group of video game fanatics who want to inform you about the best tricks, guides and tips. We offer you the best information to be a reference in gaming, so here you can find guides, tricks, secrets and tips so you can enjoy your games to the fullest. Are you ready to get all the achievements of that game that you resist so much? Enter now and enjoy your favorite video game to the fullest!
Monster Hunter Generations Ultimate review - Monster Hunter for men ❯