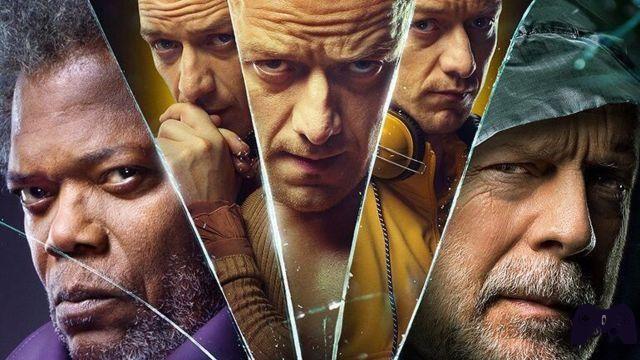 What is a superhero?

It's hard to talk about Glass being forced not to spoil anything about his shocking ending. The latest film of M. Night Shyamalan, the third chapter of the trilogy that began with Unbreakable in 2000 and continued with Split in 2016, is a crossover that begins bland, continues messy, fragmented like broken glass, then explodes and overturns all the cinecomic habits, leaving astonished and bewildered. It has neither the coherence of Unbreakable nor the rhythm and compactness of Split, it is a schizophrenic film that seems to have been shot by one of the personalities of Kevin Wendell Crumb (always the crazy and irresistible James McAvoy), capable of going from a brilliant idea to a mediocre and predictable realization within 10 minutes. It almost seems to be in front of a pilot episode of a generic mid-budget superhero TV series, yet you always get the impression that there is something more underneath.

It starts from where Split left us, with the manhunt against Kevin and the hungry "beast", a personality with demonic traits, cannibal, uncontrollable and again the jailer of four teenagers, chased by David Dunn (Bruce Willis), indestructible man led by his son joseph (Spencer Treat Clark) in his vigilante mission. The clash is written, the forces involved are the same, but the police, led by the psychiatrist Ellie Staple (Sarah Paulson) is found on the spot, as if he had foreseen their moves, equipped to neutralize the powers of the two meta-humans. It is from this moment that the rhythm becomes syncopated, showing the consequences of a 210-minute shot squeezed into 128, when the two who end up locked up in the psychiatric hospital home of another old acquaintance, Elijah Price, the glass man obsessed with comics and plagued with osteogenesis (Samuel L. Jackson), accused of numerous attacks perpetrated in the name of the search for the superman. Everything seems artifact, especially the aims of Dr. Staple, whose goal is to psychoanalyze them and convince them that they are not superheroes, that they have nothing special except strong personality disorders. A motivation that shows the side of a healthy skepticism, told through mostly surreal and fragile dialogues, especially when it borders on the para-scientific field - on the other hand at least managing to deepen the psychology of the protagonists, shooting in the pile, true point strong of Shyamalan's previous productions -

It will not be as precious as those blown in Murano, but this Glass in its defects manages to fascinate and become a particular piece of furniture in our cinephile memory.

The problem is also that everything takes place within the walls of a ridiculously guarded facility, with very few armed guards and only one attendant in turn who should both go around the rooms and check the surveillance cameras. a stuff that breaks the suspension of disbelief several times. It's all crooked, cracked, brittle like Price's bones, with pretty chilling action scenes in the staging, fake like a wrestling match, suggesting that, in fact, in previous films there were practically none. . The aesthetics are also quite anonymous, dull, aseptic. Nothing to do with Kevin's dungeons, with details that told his story scattered in every scene, almost subliminal, or with the daily Philadelphia of a David Dunn unaware of his fate. To keep everything up, too a very scazzatissimo Bruce Willis who gives the best of himself in the unedited sequences cut and pasted by Unbreakable, but there are McAvoy and Jackson, the first still phenomenal in giving character to the horde of personalities competing for a place in the light of conscience; the second capable of disturbing and fascinating with a logic as brilliant as it is bizarre, pursuing his ideal at all costs, awakening the extraordinary men of the world. It also comes back Casey Cooke (Anya Taylor-Joy), survivor of the first assault of the Horde in Split and capable of managing sequences with a high emotional rate alone. Brava.

And scene after scene, a little exhausted by the fluctuation of emotions and general quality, we arrive inexorably towards something that I do not even intend to hint or tell in implication, but we arrive there aware that Shyamalan is the Cesarini of directors and the last minutes are his penalty area. What the last few minutes tell us manages to smooth out even some imperfections, giving meaning to some, making others forget because "we loved it, we enjoyed it anyway", but the fact remains that if Split was the premise for another great film , expectations were partly disappointed. It must be said that, in any case, dear Night is one who plays with the ambiguities of his works, winking at the B-movie and always leaving the doubt that bad things have been deliberately put up with sloppiness, but in short, the feeling is that at a certain point even he didn't know very well where to go, strategically placing a mine on which he knew the spectator would put foot. And in the end it is also okay, because you have fun, you remain entangled in the story, entangled in the thoughts and delusions of three fantastic and grotesque characters, making it mandatory to watch the prequels before entering the room, both available on Netflix (glory to you), to enjoy their birth and development. A human analysis of the superhero who has the courage to question them, in a cinematic era dominated by them.

Do you want to be a video game expert and know all the tricks, guides and reviews for your video games ? Holygamerz.com is a group of video game fanatics who want to inform you about the best tricks, guides and tips. We offer you the best information to be a reference in gaming, so here you can find guides, tricks, secrets and tips so you can enjoy your games to the fullest. Are you ready to get all the achievements of that game that you resist so much? Enter now and enjoy your favorite video game to the fullest!
News Final Fantasy VII Remake, new news from E3 ❯

Special Why is the release date of a video game postponed?

Special Controller walk with me: the playful aspects of David Lynch