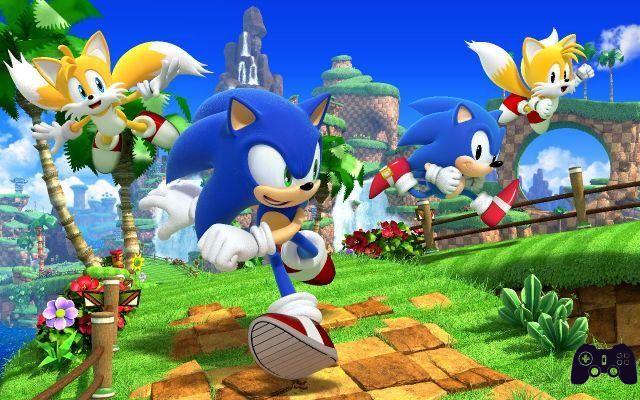 After the moderate success of Sonic: Colors, SEGA returns to the rescue with a new chapter of one of the most loved (but also most discussed) series that presents a nice change. The software house celebrates 20 years of Sonic The Hedgehog in a big way, trying to remind even old players how much time they spent in front of the old SEGA MegaDrive. In fact, in Sonic Generations some levels of almost all the old chapters of the series have been re-proposed, all surrounded by a new graphics and new combined soundtracks.

In Sonic Generations it is possible to play the "classic" way, therefore in 2D, and the new game setting seen for the first time in Sonic Jam for SEGA Saturn. In the game it will be possible to choose the game mode that you prefer by simply pressing a button while choosing the levels. The "new mode" is very similar to the one already played in Sonic Colors, where even here some minor graphical improvements have been made. The classic mode, on the other hand, features the older Sonic lower, fuller and, instead of being blue, is more celestial.

The gameplay of the "classic" mode takes us a little back in time, to that Sonic of the distant 1991, bringing us back to start our adventure in that historic Green Hill Zone that all fans remember with more and more pleasure. Remarkable, by SEGA, the idea of ​​making the levels present in the last chapters playable in a “classic” way, adapting them in 2D but leaving them conforming to historical levels without applying drastic changes related to it.

The choice of the level is made through a space where there are small representations of the level itself, as if it were an animated photo. Above these levels there are floors where there are all different acts where you will have to face challenges or get help from Sonic's friends for the completion of these. Obviously between the old and the new Sonic these acts change.

What is very interesting is that, in addition to the levels and the "mode", the accompanying music will also change depending on the character we play with. Now the choice is up to the player: old or new mode?

The plot begins with the new Sonic having his birthday, his historical friends (Tails, Knuckles, etc.) have thrown him a surprise party but this is, as it was supposed to prove, ruined by the historian Dr. Eggman who brings with him the yet another completely crazy contraption, a time machine that catapults Sonic 20 years into the past, where he will then meet the self of those times. Thus a new, exciting and very fast adventure takes place in the company of the chubby Sonic of the 90s.

Just as there are two Sonics, there certainly could not be two Eggman, who will try to counter the two heroes as best they can, in the most rigorous tradition of the series. Note how in the boss fights the two Sonics will alternate, depending on which Eggman they are in front of.

For those who are not satisfied, in Sonic Generations there is an online mode that, although it has not been requested by fans but has clearly been inserted for the usual clichés (but, let's face it, everything is broth), has only two game modes :

- Time challenge: where you have to complete a level in the shortest possible time trying to beat the record.


- Greater distance in 30 seconds: in this mode in just 30 seconds you have to get as far as possible in the level.

At the end of an online session, the final and general rankings are shown in the most classic tradition of online games.

Sonic Generations celebrates 20 years of Sonic's militancy, which first appeared on home (and non-home) TV screens on June 23, 1991, on the then-powerful SEGA MegaDrive. That idea came, in 1990, to such Yuji Naka who, with the equally such Naoto Oshima and Hirozaru Yasuhara, undertook to design a new platform that would replace the little appreciated Alex Kidd. An idea that from that day began to yield several sales (to date, lovers of statistics say that the brand has exceeded 70 million copies) and carried on, almost by itself, the unfortunate fate of SEGA itself in the hardware field. homemade. Despite how this story ended, with that Dreamcast still so dear to us, Sonic still remains one of the synonyms of "video game" and Generations is none other than the most worthy tribute to these controversial, fluctuating, very fast 20 years of Sonic .

Verdict 8/10 A SEGA from another time Comment For better or for worse, those who loved the Sonic series have always bought a chapter of their own without ever regretting it, something that never before will happen with Sonic Generations, guarantees Holygamerz. This is the most worthy tribute to Sonic's difficult but hilarious life, containing everything old fans love and what made younger players fall in love with Sonic. It is a title that would surely have made Isao Okawa proud, the first president of SEGA who died on 19/03/2001, who dreamed of seeing the software house created by him do great things. Sonic Generations proposes many of those made in the past: to be played at least once at all costs. Pros and cons ✓ Old-school and modern at the same time!
✓ New online mode
✓ Very accurate level design x 'Modern' mode very similar to the last few chapters
x Not very long-lived campaign

Do you want to be a video game expert and know all the tricks, guides and reviews for your video games ? Holygamerz.com is a group of video game fanatics who want to inform you about the best tricks, guides and tips. We offer you the best information to be a reference in gaming, so here you can find guides, tricks, secrets and tips so you can enjoy your games to the fullest. Are you ready to get all the achievements of that game that you resist so much? Enter now and enjoy your favorite video game to the fullest!
Halo Wars 2 review ❯