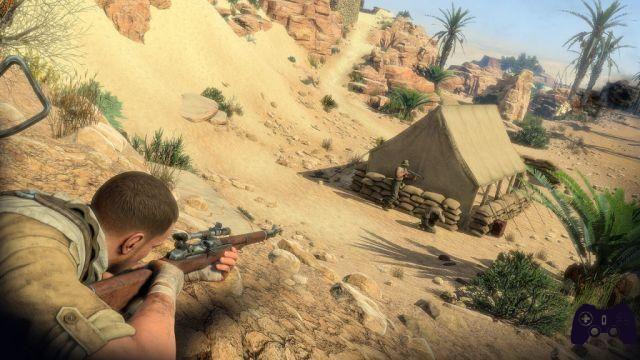 Halfaya Pass, 1941
Nazi propaganda is repeated on a regular basis by amplifiers positioned on top of the tower where I took refuge. None of the soldiers of the nearby camp has the slightest idea of ​​my presence, while using the binoculars I observe them carefully, trying to analyze their patrols and find any other sniper positioned around this valley. After making sure of the situation, I briefly check from above the explosive trap that I placed at the base of the stairs, then I lie down on the floor, starting to crawl towards the shooting station. Reached the post I take out the rifle and adjust the sight for a shot from a distance, the first target is a sniper far enough away, but in order not to alert nearby enemies I will have to wait for the speaker to start its tedious propaganda. Time passes slowly as my target remains in the center of the viewfinder, and the hot North African sun begins to make me sweat profusely, when suddenly I hear the electrical contact that precedes the recorded announcement. I hold my breath as I focus on the target, and time almost seems to slow down as I raise my aim slightly to compensate for the shooting distance ...
The recoil of the rifle tells me that almost instinctively my finger pulled the trigger, sending a lead candy at over 800 m / s towards the enemy sniper. Reposition the sight on the target I see it fall backwards, leaving nothing but a red cloud in the place of its head ...

The Elite takes the field, a big field

After the good, but not without flaws, success of the second chapter of the saga, the Rebellion boys offer us a new chapter of the saga that already from the cover seems to offer us something different than the previous games: the sun.
Of course, there will be no lack of night missions during the game,

something different: the sun

but we could say goodbye to urban fighting, no more gray and threatening clouds above us, but only the warm sun of Africa and its vast environments, which will finally allow us to go from one point to another on the map almost always using roads different. We can therefore leave behind the mostly linear paths of the previous chapter, which only in certain areas allowed a real variety in the approaches to be used, especially due to the lack of an effective stealth mode.

You don't see me, you don't hear me

Another important introduction to the gameplay is the introduction of a stealth mode, instead of immediately giving the alarm and starting to shoot you, this time the guards are initially intrigued by a not very cautious movement of the player, and will turn in his direction to check, starting to fill a yellow bar on their head based on the suspicion raised, crawling in the grass will very slowly fill the bar, while crouching, even in the shade, will accelerate the filling. Once the bar is filled the soldier actually becomes suspicious, and will actively direct himself to check the strange movement he has noticed, this will cause the yellow bar to fill red, which when completely full will alarm the enemy, who will start screaming as he removes the safe from the gun before you start shooting at us. At this point after having quickly eliminated it, we should make sure to move quickly from the area where the alarm was triggered, and once we move far enough we will be considered "repositioned", and after some time the soldiers will return to their duties, however compared to other games , after the first alarm the opponents will start patrolling the areas faster, making it more difficult to take them from behind. A small punishment for being discovered then, but for anyone who preferred to deal with enemies from a distance with the sniper rifle, an interesting mechanic has been introduced that allows you to shoot during another sound, so as to hide the sound of the shot and not be noticed. . These sound "covers" are often represented by diesel generators that are sabotaged, but are also replaced by the noise of artillery, aircraft and other situations created by the player himself, allowing to give Sniper Elite III a dual stealth concept.

To ensure an extremely immersive experience, the developers have chosen not to insert any soundtrack during the stealth phases, in fact it will be the environment around us that will accompany us. When we are close to a torch we could hear it burn, when we are immersed in nature we will hear crickets and birds and of course when we are close to the enemies we would have the opportunity to hear their footsteps and listen to their dialogues. This intense focus on the surrounding environment is further amplified by the use of the PS4 Dualshock's speaker, which with each shot fired with the sniper rifle will produce the sound of a manual reload. The only non-environmental sounds that can be heard by acting silently are short melodies of increasing intensity to warn us that an enemy is starting to identify us, and once we discover the valuable soundtrack it accompanies us in battle in the most excited moments of the battle, up to until we will be able to calm the waters again, returning to silence in anticipation of the next excited event.

In addition to the main solo campaign mode, for the first time it is possible to go through the campaign mode with a friend, who will accompany us on our adventure and which will allow us to apply new tactics to our games. The good range of customization between the difficulty and the damage of the enemies, and the ballistic accuracy also allow you to organize a game experience that will satisfy both participants.
The competitive online mode, as was to be expected in a sniper game, turned out to be a decent hole in the water: to the very long waits to find a match we must add the fact of finding yourself facing a position war with enemies that once found a good camp will hardly dare to move, and given the large presence of traps, even the idea of ​​going to find them behind could prove to be a suicide, and therefore in a 20-minute match, assuming the absence of hotheads to running around the map, you will find yourself scanning the horizon, looking for suspicious figures or movements hundreds of meters away.

Verdict 7.5 / 10 Want to see my sniper rifle? Comment The story fails to fully satisfy the player, but it remains a good contour to the main course of the game, the renewed gameplay. In fact, Sniper Elite III went to fix some of the most annoying points of the previous chapter, such as the lack of a real stealth mechanics and the linearity of the paths to follow, also going to add better inventory management and customization of the rifles. . The beautiful, much more open environments of the previous chapter leave space to complete the missions by giving the choice of the best path to follow, and also to carry out more often cinematic kills from long distance. Overall, the third installment of the series turns out to be a more than worthy successor that, especially thanks to the new cooperative mode, will be able to keep you adequately busy for several hours. Pros and cons ✓ Large maps
✓ Realistic ballistics
✓ Adequate Stealth component
✓ Good inventory customization x Overall short with no final climax
x Inadequate competitive mode
x Loading a save may not bring you back to the same situation
Do you want to be a video game expert and know all the tricks, guides and reviews for your video games ? Holygamerz.com is a group of video game fanatics who want to inform you about the best tricks, guides and tips. We offer you the best information to be a reference in gaming, so here you can find guides, tricks, secrets and tips so you can enjoy your games to the fullest. Are you ready to get all the achievements of that game that you resist so much? Enter now and enjoy your favorite video game to the fullest!
Mario Golf: World Tour Preview ❯