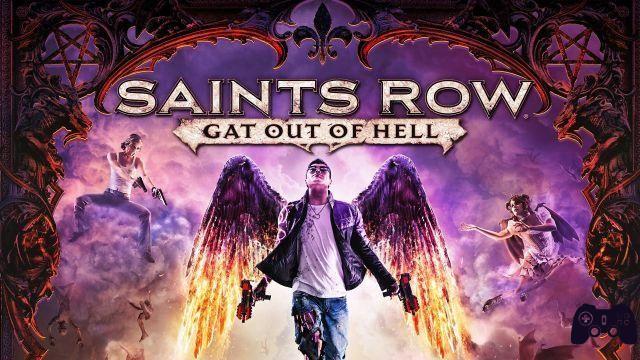 Simultaneously with the release of Saints Row IV: Re-Elected (here you can find our review) the last stand alone DLC linked to the famous saga has also been made available Volition. Saints Row: Gat out of Hell, this is the title of the new additional content, has been placed on the market in both digital and retail format for the last generation consoles at a price of 19 €. For all users with PlayStation 4, Xbox One e PC remember that the DLC is present within the retail version of Saints Row IV: Re-Elected. Will Gat out of Hell be as entertaining as the last major episodes of the series? Find out in our review.

Saints Row: Gat out of Hell is fun from start to finish

La plot di Gat out of Hell sees the president of the Saints (protagonist of the main series) disappear inside a fiery chasm during a séance at Kinzie's birthday party. It will be up to Kinzie, together with his colleague and friend Gat, to try to recover the boss before the devil, fascinated by the president's murderous abilities, manages to arrange the marriage with his daughter Jezebel. This bizarre adventure, characterized as always by a extreme and highly insane humor, will see us meet some fascinating secondary characters such as Blackbeard, Shakespeare, Vlad the Impaler (but not only) with the aim of seeking help in them to defeat the devil. The narrative sector of Gat out of Hell, just like the main title, manages to entertain from start to finish, accomplices i dialogues which once again prove themselves charismatic and able to snatch a smile at every joke. Too bad, however, that the main plot is very short and that the title can only be completed in just over two hours, making the duration / price ratio quite unbalanced.

The gameplay of Gat out of Hell is very reminiscent of that of the main title, but boasts some interesting additions

Il gameplay di Gat out of Hell is very reminiscent of the main title, but some interesting additions they manage to make this new DLC fun and never boring. The new powers, obviously linked to the supernatural, convince and make the challenges to be fulfilled at the right point. There new ability to fly of the protagonist also allowed the guys of Volition to disseminate the game map of clusters to be recovered, thus increasing the longevity of the DLC. It is also possible to decide whether to face the adventure using Gat or Kinzie (with few differences on the development of the plot), allowing however to replace the character simply by talking to him inside the Ultor Corporation tower (our duo's base of operations). The possibility of using two protagonists is reflected in the introduction of the "Co-op campaign”, Where we will be able to face the whole adventure in the company of a friend, greatly increasing the fun of the opera. Unlike Saints Row IV, our purpose within this DLC will not only be to carry out a series of main missions until the completion of the title, but will be to increase Satan's anger (indicated by a special bar) to lure him into the open thanks to the numerous secondary missions present within the game map. Game map that, of course, was built to take full advantage of the new powers of Gat / Kinzie and that it offers a new city to explore both by land, with a series of hellish cars, than via heaven, thanks to our heroes' new flying ability. A special applause should be made to the weapons of this DLC which, never before, manage to entertain thanks to totally idiotic designs and hilarious effects to say the least.

The devil is in the details

Gat out of Hell boasts a good technical sector

Under the technical profile Gat out of Hell maintains the great features of its current gen console remaster, offering a good visual cleaning e excellent general fluidity. They still sin, Unfortunately, the polygonal models of the characters which, although not disastrous, lack of expressiveness and, sometimes, of convincing animations. On the other hand, the sound sector is excellent which boasts well-chosen music and the high-level dubbing to which we have become accustomed to this series.


Verdict Yes Hell is a dish to be served cold! Comment Saints Row: Gat out of Hell is a DLC that will surely entertain fans of the saga, but which fails to reach perfection due to a longevity set down and a starting price too high compared to the proposed contents. Our advice, in case you do not have the starting title, is to recover it together with Saints Row IV, in order to plug the expense with a much greater amount of hours of play than what is offered by the single stand alone package. In any case, lovers of the series should not be afraid. In Gat out of Hell, you can find everything you could want from a Saints Row add-on: action, violence and a lot of healthy craziness! Pros and cons ✓ Always stellar and fun humor
✓ A new city and many actions to be carried out
✓ Unmissable if included in the Re-Elected edition x Uninspiring longevity
x Price of the stand alone version too high

Do you want to be a video game expert and know all the tricks, guides and reviews for your video games ? Holygamerz.com is a group of video game fanatics who want to inform you about the best tricks, guides and tips. We offer you the best information to be a reference in gaming, so here you can find guides, tricks, secrets and tips so you can enjoy your games to the fullest. Are you ready to get all the achievements of that game that you resist so much? Enter now and enjoy your favorite video game to the fullest!
Guides How to best manage HP and SP - Persona 5 Strikers ❯

FIFA 20 review: the review of the new EA Sports title

Add a comment from Saints Row review: Gat out of Hell