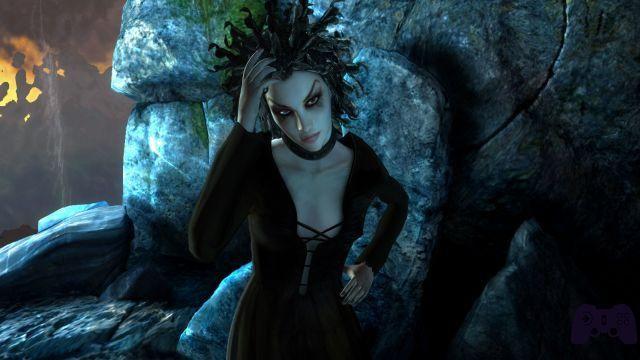 Nicolas Eymerich, Inquisitor: The Village is the second chapter of the videogame adaptation of the adventures of the inquisitor protagonist of the Fantasy saga (but also science fiction and horror) born from the pen of the Bolognese writer Valerio Evangelisti. The title comes almost a year and a half away from the previous "The Plague", actually after being available for a few months in "Open Edition", a sort of Early Access to Steam, which the authors wanted to experience in order to involve fans in the debugging and refining process. After this last step too, the complete edition of Il Villaggio has finally entered the market in a digital version both stand alone and together with the first episode, through the official website of the project. So let's go and find out together if the boys of TiconBlu they managed to confirm the good ideas that had already emerged in their first foray into Anno Domini 1364.

The plot of Il Villaggio picks up exactly where The Plague left us. After having extorted from the abbot Vinet of Avignon the appointment to Inquisitor General, Father Eymerich heads to the village of Calcares, in search of the missing friend Father Jacinto Corona and with the mission to shed light on the mysterious events that are affecting the small village, not least the strange plague that torments all the male inhabitants. Compared to the first episode, which in fact constituted a mere introduction, the story goes much deeper than the story, and we can denote right away darker and more macabre tones, but also more interesting and engaging for the player. Especially in the final stages many are strongly present metaphysical and dreamlike elements, so dear to fans of the literary Eymerich and unfortunately only remotely mentioned in the first episode: as we continue in the game, the distance between the two "narratives" of Eymerich will become shorter and shorter, and in this the developers have undoubtedly been successful . An interesting feature of La Peste that has instead been lost in Il Villaggio is the presence of several contemporary lines of investigation. In this second episode, thanks to a large location several times that of the first chapter, a more linear narrative was preferred so you can allow the player one more orderly and distraction-free progression. Another difference with the first episode is the absence of the now infamous Easter Eggs. The Plague was literally filled with these references and quotes, both to such sacred monsters as Monkey Island and to pop culture figures like Don Zauker. Their presence in the game, however ironic and humorous, was however very little connected with the investigations of the cruel inquisitor, and their removal in The Village is very welcome. With all due respect to all who had enjoyed them in the past, The Village gains a lot in atmosphere and narrative coherence from the removal of these extras.

Like the previous episode, the second episode of the videogame Eymerich looks like aOld school graphic adventure full blown, with the usual exploration kit, dialogues, objects to examine and combine with each other, various puzzles and minigames. The appreciated possibility of using a double control system also returns: that point and click via mouse, and the fully textual one via the parser. If the control system and the inventory have been re-proposed in an almost identical way to the past, a small novelty is present in the management of the camera. While the closed and restricted locations of La Peste preferred a camera with fixed angles, the larger and more open locations of Il Villaggio present a partially mobile camera, able to follow the player in their movements. The effect is not the happiest, however. Sometimes, by scrolling, the camera will prevent us from accessing some of the active areas on which we should click, forcing us to move Eymerich, to allow the camera to frame the affected area again. Other times, the incomplete mobility of the camera and the particular viewing angles will prevent us from fully understanding the morphology of the place where we are, forcing us to often resort to the map to organize the various movements. In terms of difficulty, a general is worth mentioning increased complexity of puzzles. Especially in the more "metaphysical" portions of the game their logic is not always clear, and forces the player into frustrating streaks of trial & error or using the automatic help function. To make matters worse there is also the imperfect positioning of the active areas, sometimes not entirely coincident with the reciprocal graphic element, and sometimes not very clear identification. The last noteworthy addition is the possibility, starting from about halfway through the adventure, to play both as Eymerich and Jacinto Corona. Too bad that the possibility of tandem puzzles using specific abilities of the two inquisitors is only made to smell the player, without it being really inserted, but at this point we plan to see it in future episodes of the series.

But what beautiful corpses!

The graphic aspect is the one where Il Villaggio has made the greatest progress compared to La Peste. Accomplices a perfectly fitting artistic style and an incredible realization of the 2D backdrops, the game gives off charisma and charm from each screen. The maniacal care with which the sulphurous and rotting atmospheres of Calcares, as well as the infernal images of the Cistercian abbey in flames, or even those ethereal and mystical of the final stages of the game, is undoubtedly commendable. Even the 3D elements, by far the weak points of the previous production, showed a significant improvement. There is a greater attention to detail in the polygonal models, animations and graphic effects. The final result is clearly still far from the productions of AAA titles, but it is undoubtedly to be reported that few improvements in some areas manage to generate an overall better and more satisfying look than that of the first episode. Despite the open beta period, finally, we note the permanence in the final version of the game of some graphic bugs that have evidently escaped the developers, such as some interpenetration of polygons, or characters who in the town square find themselves sinking into the ground or float in the air. In any case, these are not serious problems, and we are sure they will be corrected quickly with future patches. The audio sector remains on the same excellent levels as its predecessor, with a soundtrack that alternates atmospheric and mysterious pieces with more rocking pieces, perhaps not entirely in line with the setting, but definitely well composed and certainly effective. The dubbing, made in Spanish and Latin (!!!), is of a professional level, even if at times some voices appear excessively set and histrionic, making some scenes involuntarily comical.

The duration of the adventure is around 6 - 10 hours, depending on the player's skill in solving the puzzles. The title is slightly longer than the predecessor, thanks to the larger setting and a more full-bodied plot. Replayability is also guaranteed by the presence of a secret plot. By completing the game normally only 70 leaves will appear on the so-called "Progression Branch". The remaining 30 leaves will appear only upon the completion of a portion of the plot that only the most attentive and meticulous players will be able to access. Using the help function will also consume the leaves of the branch, so an additional challenge will be completing the branch with all 100 leaves.

Verdict 7.5 / 10 The cruel inquisitor's investigations continue Comment Nicolas Eymerich, Inquisitor: The Village is a good game that builds on the solid foundations based on the first episode. And it does it with ambition: the game is bigger, the graphics are better, the atmosphere is more coherent and more captivating, the plot is more extensive, the leitmotifs are closer to those of the literary Eymerich than they are. is done previously. But along with bigger ambitions there are also bigger challenges and more difficult jobs. This is how we explain the presence of some burrs not present or only hinted at in the first chapter, such as the surge in the difficulty of the puzzles or the suddenly tedious navigation in the Calcares scenarios. However, we are confident that TiconBlu will be able to capitalize on the experience of this title and will further exploit the potential of the Eymerich brand with the third and fourth installments of the video game, currently in development. Having said that, we just have to recommend Il Villaggio to all those who enjoyed the first chapter, to Eymerich readers, to fans of graphic adventures and in general to all those who want to support a team committed to such a great project. Laudetur! Pros and cons ✓ Good adaptation of the world of Eymerich
✓ Bigger and more ambitious than the first episode
✓ Significant graphical improvements x Sometimes frustrating puzzles
x A few graphic bugs too many
x Navigation made tedious by the camera
Do you want to be a video game expert and know all the tricks, guides and reviews for your video games ? Holygamerz.com is a group of video game fanatics who want to inform you about the best tricks, guides and tips. We offer you the best information to be a reference in gaming, so here you can find guides, tricks, secrets and tips so you can enjoy your games to the fullest. Are you ready to get all the achievements of that game that you resist so much? Enter now and enjoy your favorite video game to the fullest!
News Borderlands 3: The arrival of Zane ❯

The Vanishing Of Ethan Carter Review

Add a comment from Review Nicolas Eymerich, Inquisitor: The Village