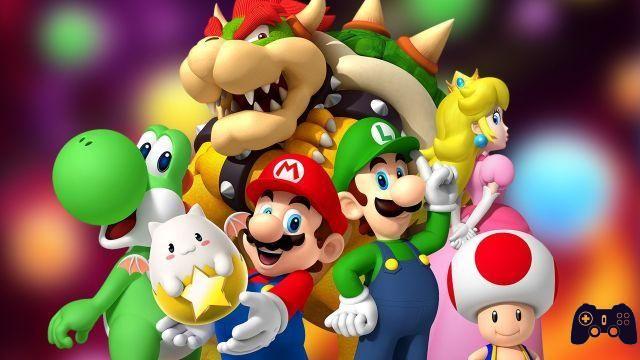 We got to talk about Puzzle & Dragons Z + Super Mario Bros. Edition in recent days in our preview and now it's time to draw conclusions on this revised and corrected version of the "classic" GungHo Online Entertainment that has gone crazy on smartphones all over the world and that after a long wait arrives on Nintendo 3DS accompanied by a Mariesque-themed version.

When I grow up I want to be Domadraghi

As already mentioned in the preview, Puzzle & Dragons Z is a hybrid JRPG-puzzle game that combines these two worlds so distant through simple match-3 mechanics. A winning and apt formula that, in its first release on mobile devices, has acquired download records, earning fame and interest from players all over the world. Also thanks to the distribution method which, riding the wave of free-to-play and microtransitions, has managed to establish itself as a reference title for one of the most abused genres on smartphones and tablets.

In this console edition though, Puzzle & Dragons Z is stripped of its gratuitousness and consequently, of that waiting and cooldown mechanism that governed the mechanics and timing of the game necessary to progress. At the same time, however, a revision of the structure was necessary, if not fundamental, by GungHo, by inserting a story mode that justified the price and motivated the user to purchase.

And here we find a plot that sees us protagonists of a full-bodied adventure set in the peaceful continent of Draconia. An apparent peace since soon the balance will be upset by an evil corporation, the paradox, whose aims are to destroy the world in order to rebuild it following an obscure plan. Literally, as Draconia will fall apart and it will be our turn as Domadraghi novice, piece together this huge puzzle by restoring serenity to the whole world. What is able to do a Domadraghi you ask? We will simply have the possibility to control some creatures that will help us in battle to defeat the enemies and Lieutenants of the Paradox who will try to prevent the carrying out of our mission.

The addition of a story, even quite full-bodied and lasting, is certainly an appreciable element within Puzzle & Dragons Z, although in the long run it is not very original and quite childish, both in implications and in the topics covered, but remaining in line with other similar productions appeared on 3DS such as Pokémon, Fantasy Life o Inazuma Eleven. This is not necessarily a defect (given that the target audience is that of the aforementioned titles), on the contrary, although simple and lacking in great narrative cues, it is still enjoyable even to a more mature and demanding audience thanks to several hidden quotes here and there or some pleasant curtains which also affect the fourth wall.

Line up for 6 with the remainder of 2

Once the first tutorials that will explain the basic actions of the game have been put aside, it will be time to leave for our adventure, only after having prepared our party with the basic monsters available at the beginning of the game. The P&DZ rules are pretty easy to learn. Being basically a classic match-3 we will have to line up some colored spheres arranged on the second screen of the 3DS. With the help of the stylus we will be able to touch a sphere and move it by dragging it freely on the game grid and align 3 or more horizontally and vertically. Using these globes, each of which corresponds to a different element (Fire, Water, Wood, Light, Darkness), we will be able to attack enemies by reducing theirs Health Points. Here then various alignment techniques come into play that will be useful to maximize the number of combinations obtainable in a single turn. Only with experience, and a little luck, will it be possible chain multiple consecutive combinations, take advantage of powerful group attacks (eliminating five or more balls in one go), use the Z Spheres to triple the power of the attack or use Skills. These will be regulated by special points that can be accumulated while fighting and prove to be a precious help during clashes and allow you to activate upgrades, restore health or block time for a few seconds.

The fights take place in quick turns. Once we have analyzed the enemies we will have only a few seconds to move the spheres in order to unleash an attack. It will be necessary to take into account the element of our opponent to attack using a contrary one that can inflict more damage, following the basic rules of the Chinese morra, here adapted according to the weaknesses and advantages of the elements (we will then have Fire> Wood, Wood> Water, Water> Fire while Light> Darkness and vice versa). There is also a sixth type of spheres, Heart, which is a separate game and which allows us to recover part of the energy lost once the combo is aligned and activated. At the end of the clashes we will receive experience points that will be shared between the members of our party and the D-Volt, the currency of the game that we can spend at Zed City, the central hub and base of our protagonist.
In Zed City, in addition to interacting with the inhabitants, perhaps solving some of their problems by completing the various sub quests that will offer us, we will also be able to access the Ranger Headquarters, the operational center of our missions that will offer us numerous tools to enhance our party. Inside the Ranger HQ, more precisely in the Dragon laboratory we will be able to hatch the eggs collected in the dungeons and then use them as a team. The laboratory also offers us the possibility to evolve our monsters, which will enhance and gain new abilities, as long as you have the chip needed to activate the process and which will be released in battle by some of the defeated enemies.
If you decide not to hatch any eggs, those in excess can be used to enhance the monsters, facilitating the process of growth and accumulation of experience, making them level up immediately (always based on the value of the egg chosen, which once used it will vanish).

For Aspera | Review, inhabiting Mars with an AI