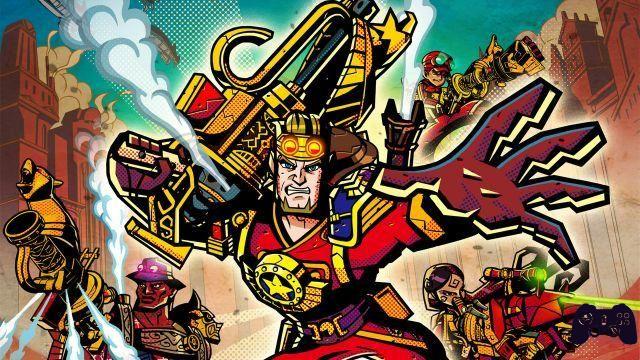 Intelligent Systems is one of the most prolific Nintendo teams, thanks to numerous successful series such as Fire Emblem, Advance Wars, and Paper Mario.
At the last E3, during a presentation behind closed doors, it was shown for the first time Code Name STEAM, the team's new real-time strategy game exclusively for 3DS.
While in America the title has already been on sale since last March 13, for us Europeans a free demo is available on eShop, waiting for the next full title May 15.
In this preview we will give a general smattering of some characters and the combat system of the new title from the creators of Pullblox.

The steam saves the Queen

An army of aliens attacked London, endangering the citizens and Queen Victoria. Fortunately, the STEAM, the Technical Team for the Elimination of Aliens from the World, created and led by President Lincoln, is ready to defend the innocent from this bizarre threat. Code Name STEAM opens the dance on a plot full of twists and bizarre characters, full of charisma and a character design reminiscent of a classic American comic.

a plot full of twists and bizarre characters

On board the Lady Liberty, STEAM's mobile headquarters, between missions, you will get to know your team and the London of Intelligent Systems better, as well as equip your four heroes with new Steamers and Lethal Weapons.
Before focusing on the war department, it is necessary to spend a few words on the protagonist and the initial supporting actors that we will have to move on the various battlefields.
Henry is the head of security of the US Embassy in London, who is razed to the ground at the beginning of Code Name STEAM, forcing the war hero to escape from aliens in the useful tutorial that will take you to the basic mechanics of the game. The blonde soldier will soon be joined by John, a working-class hero with an almost completely metal body, and armed with a powerful grenade launcher capable of routing multiple aliens at once. Finally, Lion, a genetically mutated STEAM soldier, will be the third member of the team who will go to rescue none other than Queen Victoria in the first missions of the new team founded by President Lincoln.

The cast enjoys English dubbing, including Will Wheaton voicing none other than President Lincoln, while the lyrics of theentire title are fully translated into Spanish, as is now tradition for Nintendo titles.
To support the dubbing a valuable soundtrack (at least for now) that presses the player's turns as in any modern cinecomic.

Intelligent Systems has always been a guarantee on gameplay: whether we are talking about strategic with Fire Emblem, platform with Pullblox and Fallblox or RPG with Paper Mario, the team has always worked to guarantee a rich and complete experience. Code Name STEAM It is not exempt from this merit, and catapults the player into a third-person turn-based strategy, giving at the beginning of each mission a goal to be achieved or a task to complete. In the first chapters of this new intellectual property, we find ourselves in urban maps scattered with obstacles and gradients that can be easily controlled with the Lion Trampoline of the homonymous protagonist.
All the movements of the characters consume steam (in English Steam), and each hero can be equipped with a maximum of two different weapons and a steamer (of various sizes): Intelligent Systems has decided to use the collectibles to enhance the heroes' steam backpack, on each map is in fact scattered with three gears to be collected before reaching the end of the area, the weapons instead will be unlockable by reaching a certain number of coins. All heroes (maximum four per mission) will have a special shot at their disposal, exiled from the remaining steam, which can be activated once per map, and cause massive damage to enemies. Just talking about the latter we find the first big flaw of the game: during the turn of the aliens it is not possible in any way to accelerate the actions, and you will have to put up with every minimum opponent movement by breaking the pace of the game.
A small flaw that at the moment could undermine the use of the title to the most impatient players, however it should be specified that if you had to replay the level, you can accelerate everything with the Select button.

Comment Code Name STEAM for now is convincing and thrilling us, although the big flaw of waiting during the turn of the enemies remains. Fortunately, the touch of Intelligent Systems in this new ip is felt and the characters conquer almost from the first appearance. We haven't been able to fully test online multiplayer, but we will spend time reviewing it ✓ Well characterized characters

✓ Well thought out gameplay ... x ...at the moment
x Opponent turns too long

Do you want to be a video game expert and know all the tricks, guides and reviews for your video games ? Holygamerz.com is a group of video game fanatics who want to inform you about the best tricks, guides and tips. We offer you the best information to be a reference in gaming, so here you can find guides, tricks, secrets and tips so you can enjoy your games to the fullest. Are you ready to get all the achievements of that game that you resist so much? Enter now and enjoy your favorite video game to the fullest!
News Cyberpunk 2077: movie-like narration for adults ❯

Preview Skul: The Hero Slayer - Losing your head with ease