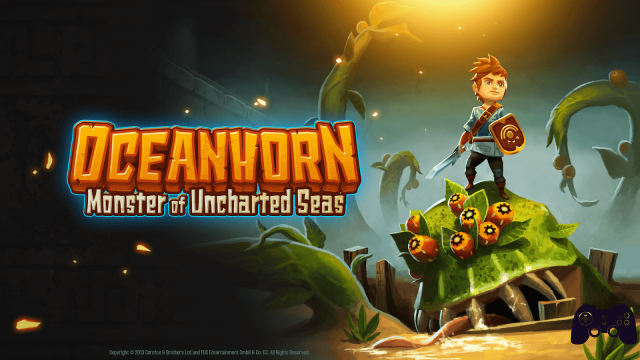 Gaming on mobile has now established itself as an importance on a global scale, managing to offer from time to time also titles sold at a price higher than the typical "coffee price" that has made the fortune of this market. Oceanhorn: Monster of Uncharted Seas, released in November 2013, was precisely one of these products, managing at the time to justify (at least as far as most of the critics are concerned) its € 8,99 by virtue of a first-rate technical and acoustic sector and of a (not exactly hidden) inspiration to the series of The Legend of Zelda. Today the Cornfox & Brothers title arrives on Steam trying to repeat the success of the original: will it have made it?

The Legend of Oceanhorn

The references to Zelda already begin on the narrative level: Oceanhorn, however, never takes off from this point of view

The incipit of Oceanhorn sees the protagonist's father leave his son, already an orphan of his mother, to go and face the mysterious danger represented by the Oceanhorn, a marine creature closely linked to his family. Some time later, the father's responsibility will inevitably fall on his son, who is called to embark on a journey through the so-called "Unexplored Sea" with the aim of finding and defeating the monster and restoring order in the world.

Already from these few lines it is clear that the events narrated therefore do not detach too much from the plot traced by the Nintendo series: it is essentially a story with an epic tone that sees the hero on duty face a journey that aims to bring salvation to the world. More than in form, the differences with The Legend of Zelda can be seen looking at the substance, due to a narrative that is all in all predictable and never too bright and the absence of thick characters that never allow the narrative component of Oceanhorn to take off of the all.

From the point of view of mechanics, also in this case "paying homage" to the Nintendian shores and referring to The Wind Waker, Oceanhorn is essentially divided into two phases: those on the ground, where the focus is on exploration and fighting, and those " marine ”aboard the protagonist's boat. At the beginning these are little more than movies and do not have any interaction with the scenario (not even allowing you to navigate freely, but only following predefined routes from one island to another), then evolving towards playful solutions closer to those of the shooter on tracks as the protagonist levels up and increases the boat's weapons equipment (once the rifle is unlocked, for example, along the road you will encounter marine enemies and mines, which must be hit from a distance to avoid taking damage). In short, we are far from the freedom of exploration granted by The Wind Waker, perhaps also thanks to the original nature of the title, designed for iOS systems.

Even on the play front, the influence of Zelda is felt: exploration and the battlye system promoted ...

Once you get off the ground the feeling returns again in "Zelda", proposing as mentioned the sections that place more emphasis on exploration, fighting and puzzles. Let's start with the positive notes: Oceanhorn from an exploration point of view is more than convincing, encouraging the player both to talk with non-player characters to steal useful information (or coordinates for new islands, given the "unexplored" nature of the sea in which the events are set) and to visit all the areas that each place offers, given also the amount of content designed by the developers. Even the combat system, however simple, does its duty: you have a shield and sword (and later also a bow and bombs), with the possibility of both parrying and attacking opponents on duty, and from time to time. in time we also find ourselves facing some very successful boss fight on a playful level. The only ones are those who from time to time make us accuse the lack of a more precise lock-on system (with the bow, for example, we are not always very precise) and regret the choice of an almost bird's-eye camera, functional (especially in the original version for iPhone and iPad) but a bit too rigid once landed on PC.

… The riddles should be reviewed instead

Ma the most serious defects are to be found in the last of the three components mentioned above, that is the puzzles: these are often very simple and repeated until the end, and almost always translate into "move this box to be able to cross the passage" or "press this button" (in the variants "smooth" and "leave an object above" ). Nothing that he does not know of already seen and, in any case, manages to vaguely engage the player, boring him rather than entertaining him.

There are a few minor bugs, but audio-visually Oceanhorn succeeded

From a technical point of view, the only flaws to report concern some minor bugs and some problems from the point of view of the interpenetration of polygons: these are not such problems as to make the product unplayable, but they certainly make the nose turn up a bit. Apart from this, the title technically defends itself really well and therefore confirms one of the salient features of the original version, managing to give a truly successful glance even at the highest resolutions thanks to the polygonal increase performed by the developers in view of the arrival. on Steam. Obviously, the soundtrack is also reconfirmed, which can count on two exceptional collaborators such as Nobuo Uematsu and Kenji Ito.


Verdict 7/10 Nathan Drake has nothing to do with it Comment Oceanhorn: Monster of Uncharted Seas in this PC incarnation shows its limits due to its "original nature" as a mobile title, failing to fully convince us due to some "rigidity" derived from the original platforms such as boat sections on tracks and too simple and repetitive puzzles. The combat and exploration phases, however, while feeling a bit of the blow due to the motionless camera, wink at The Legend of Zelda and bring home the result. It won't be the most original title of 2015, but if you're a fan of the Nintendo saga, taking advantage of one of the upcoming Steam sales might not be a bad idea. Pros and cons ✓ Thick soundtrack
✓ Visually successful
✓ Lots of content x Simple and repetitive puzzles
x The fixed camera occasionally weighs
x Not very original

Do you want to be a video game expert and know all the tricks, guides and reviews for your video games ? Holygamerz.com is a group of video game fanatics who want to inform you about the best tricks, guides and tips. We offer you the best information to be a reference in gaming, so here you can find guides, tricks, secrets and tips so you can enjoy your games to the fullest. Are you ready to get all the achievements of that game that you resist so much? Enter now and enjoy your favorite video game to the fullest!
News Pete Hawley is the new CEO of Telltale Games ❯

Add a comment from Oceanhorn review: Monster of Uncharted Seas