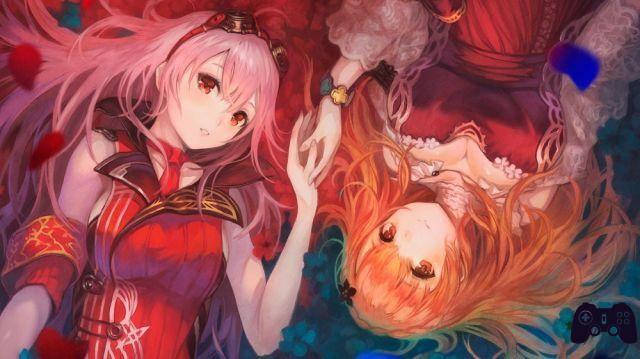 In the latest generation of consoles Gust was one of the most active software houses, thanks to the release of 6 games in 6 years and only on PS3. With the arrival of the new generation of consoles, however, the company has decided to seize the ball, taking on a new challenge that responds to the name of Nights of Azure. Released in Japan on PS3, PS Vita and PS4, with only the latter version appearing on our shores.

The Earth without Night

Welcome to the Land without Night

Centuries before the happenings of the game, the world saw the clash between the Santa and the Nightlord. Although the battle ended with the victory of the forces of good, the blue blood of the Nighlord spilled over to Earth, contaminating humans and, consequently, giving birth to demons. Precisely because of these beings, humanity has not been safe since then, forced to spend the night in terror of being attacked by monsters. From here on, the world will be known as the Land without Night. After this introduction we will get to know the protagonist of the game, a girl named Arnice, Curia agent contaminated by blue blood and endowed with extraordinary abilities who arrives on Ruswal Island with the task of protecting the new saint selected to seal again the Nightlord, close to resurrection. It is about Lylisse, Arnice's childhood friend. Soon the girl will find herself facing a terrible decision: protect the life of her best friend, condemning humanity, or sacrifice her for the good of the world.

Using Servans in battle is critical

As soon as the game starts, we will immediately find ourselves in the fray, with a series of tutorials that will show us all the mechanics of the fighting. Nights of Azure looks like the typical Action RPG. We will be able to directly control only Arnice, with the square, triangle and circle and X buttons, with the last two that are also used to carry out dodges and the special attack supplied to the weapon in use. The girl will have 5 weapons in total, each with different effects and range. They range from the classic sword, to the powerful hammer, two daggers to bring quick combos and a crossbow, perfect for hitting from a distance. The fifth weapon, on the other hand, is an enhanced version of the sword but will only be obtained later in the game. Weapons can be changed at any time, even while performing a combo with the simple press of one of the directional arrows of the D-pad. Arnice, however, will not be alone in the battles, there will be to help her the Servan, small demons whose use is essential in clashes. The Servans must be set up through special decks, for a maximum of four, where each of them will be assigned to a key. Once this is done, the player can summon them into battle by pressing the R1 backbone together with the one corresponding to the Servan you want to use, i.e. square, triangle, circle and X. Summoning Servan involves consuming SP, which changes according to the type of imp chosen. Once the demons have descended into battle, they will be moved by an excellent AI, but we can still give them orders by pressing the L1 to access the command bar, and then the button on the D-pad corresponding to the desired action. It will also be possible to order him to use the special attack supplied, simply by pressing the same buttons with which the Servan was summoned. As the game progresses, we will be able to obtain additional Servans thanks to special objects dropped by enemies: fetishes. Once we have obtained a fetish, we will be able to create a new demon thanks to the command Actualize. 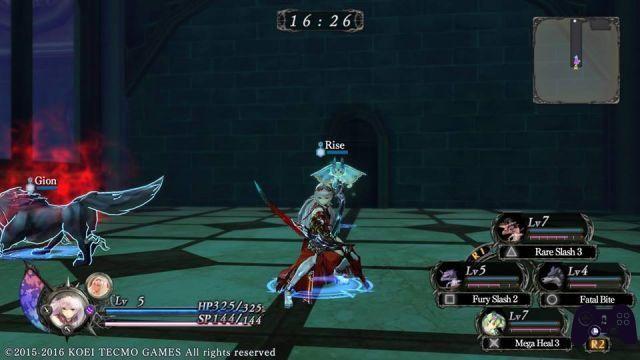 Arnice is capable of taking on 5 different demonic forms

Arnice was bathed in the Nightlord's blue blood, which made her a half demon. In addition to the extraordinary skills in battle, the girl is capable of hiring ben five different demonic forms, each with specific abilities. The first transformation we will have will be the Demon Form, with Arnice that will sharpen the appearance similar to a devil, with the ability to deliver powerful fire-based blows. Going forward with the game we will also be able to access other forms: The Rabbit Form, based on the speed of the attacks, the Phantom Form, based on the use of magic and the recovery of HP and SP, the Armor Form, from the formidable attack and defense and finally the last and the most powerful or the Nightmare Form, which, given its exceptional power, translates into the systematic victory of any clash. The transformations are inextricably linked to the Servan present in the four decks, this is because the demons have their own specific elemental attribute and, therefore, in order to use a certain transformation it will be necessary to insert in the designated deck those Servan whose element corresponds to the desired demonic form: once this is done, to activate it you must first fill the 'appropriate bar, which is located together with that of the HP and SP, and then press the L2 key. Using transformations is very useful, especially against certain bosses and in the final stages of the game, this is due to one difficulty very badly calibrated, with the game going from a low challenge level to a much higher one out of the blue, without giving the player a chance to prepare accordingly.

One of the peculiarities of the title lies in its system for leveling up. By defeating enemies we will accumulate blue blood, which will serve to strengthen Arnice through a ritual to be performed at the Jorth Altar. In this dream world, where it is not possible to lie, we will be guided by the Priestess of Jorth, who has the task of guiding and advising the holder of the Demon Sword, the sword of the Nightlord. Thanks to the ritual we will be able to raise our level, obtain new skills, new weapons and unlock the new demonic transformations, with the maximum level set at 11. At the altar of Jorth, however, we are not limited only to this, as speaking with the priestess we will be able to obtain valuable information on the story and above all increase the degree of affection between Arnice and Lylisse, essential to be able to obtain the best ending of the game, provided we answer the questions that will be asked exactly. 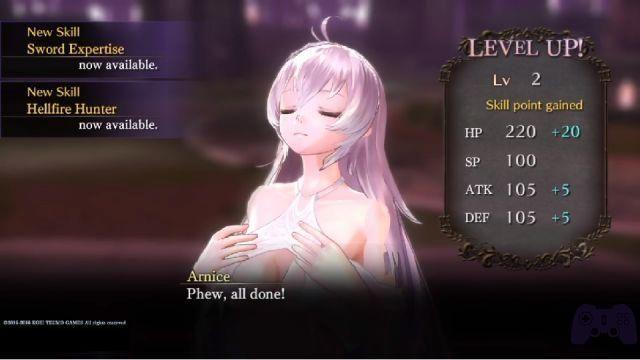 Relax at the hotel

When we are not around to face the demons, we can freely visit the city hotel, the base of our operations. Here there is the opportunity to attend numerous secondary events starring not only Arnice and Lylisse, but also Simon, the hotel manager, Professor Alucard and Lloyd, respectively a demon seeker and treasure hunter. Also through the hotel we can accept various secondary quests, which are divided into night and day. The former simply consist of searching for specific locations and defeating a certain number of enemies, while those that take place during the day depend on the time spent in the dungeons, usually they are completed by passing from 3 to 5 minutes, and will give the player a small amount of skill points, which we can spend to unlock the skills acquired by leveling up. Without the quests, which in the long run are monotonous and quite boring, all that remains is to face the challenges proposed by theArena, where we will be able to engage in particular battles where to win you must know how to use to the maximum all the skills and Servans available, all to receive the coveted prizes ranging from blue blood to money up to rare and unique items.

Although the reference version of Nights of Azure is the PS4 version, on a graphic level there are no big steps forward compared to what Gust showed us on PS3, also thanks to the fact that in Japan the game was also released on the old Sony and PS Vita consoles. The positive note, however, is that the PS4 version that hit our shelves and the best one, with an almost always stable framerate at 60fps that undergoes drops in a very random way, as it can happen to see slowdowns both in the most crowded phases but also in situations of flat calm, where only the player moves. As mentioned, the graphics are not of a high standard, but the character models are made and animated very well, a sign that Gust still managed to take advantage of what PS4 had to offer. On the other hand, a negative note are the rooms, which are rather bare and uninspired. The soundtrack is very good, which alternates beautiful piano pieces with electric guitar.

Verdict 8/10 Beating, love and sleepless nights Comment Nights of Azure marks the debut of Gust in the new generation of consoles, with a plot with mature tones and an overall average gameplay for the genre. Despite some technical flaws, the company's new IP is a decidedly successful experiment and therefore promoted. Recommended not only for JRPG lovers, but also for those looking for an action title worthy of a name. Pros and cons ✓ 60fps
✓ Texture with serious tones
✓ Fun and never dull gameplay x Repetitive missions
x Some sporadic drop in framerate
x Poorly balanced difficulty
Do you want to be a video game expert and know all the tricks, guides and reviews for your video games ? Holygamerz.com is a group of video game fanatics who want to inform you about the best tricks, guides and tips. We offer you the best information to be a reference in gaming, so here you can find guides, tricks, secrets and tips so you can enjoy your games to the fullest. Are you ready to get all the achievements of that game that you resist so much? Enter now and enjoy your favorite video game to the fullest!
LA Noire review ❯