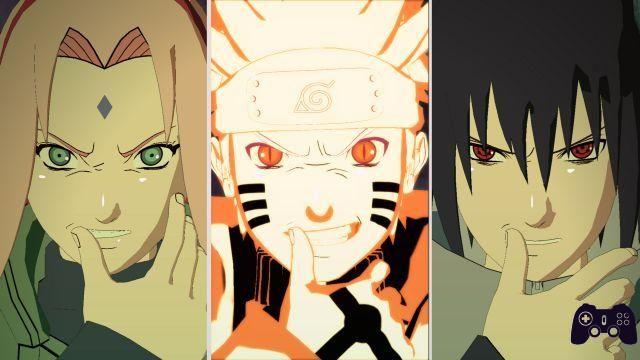 Naruto is one of the most famous manga of the Jump magazine which, after about 15 years, found its end last November. This autumn we will pay tribute to the work of Masashi Kishimoto with the new title of the saga "Storm", about two years after the previous one and coming for the first time on Xbox One e Playstation 4. Thanks to Bandai Namco, who will publish the game on our continent, we were able to try Naruto Shippuden: Ultimate Ninja Storm 4 and we are ready to give you our opinion on the latest adventure of Naruto Uzumaki from the Leaf Village.

The basic formula is that of the Ultimate Ninja Storm series, but there are some new features

During the event it was possible to try two sections of the new title Cyberconnect 2. The first was the same demo shown at Jump Festa and tested by Japanese users, who saw colliding Hashirama Senju e Madara Uchiha, while the second was an unpublished sequence showing the clash between the Team 7, consisting of Naruto, Sakura and Sasuke, and the Ten-tailed (Juubi). The first of the two demos showed the typical gameplay of the series, a 1 vs 1 clash, with the addition of two new dynamics: the armor break e interaction with objects. The armor break consists of a degradation of the character's clothing at each bar of life consumed, while the second novelty concerns the interaction with the scenario: during the clash, under certain conditions, it will be possible to collect some weapons or some objects to further damage your enemy. Both of these new features will likely be exclusive to boss battles.

The second demo tested, however, showed a musou sequence where Gamakichi (frog summoned by Naruto) helped by Katsuyu e Aoda (snail and snake evoked by respectively Sakura e Sasuke) faces a multitude of small Ten-Tails. There is no news compared to the sequences of the same type in the previous game but you can notice some small improvements due to the hardware of the console such as the increase of enemies on the screen and the management of the same.

Furthermore, the two boss fights tested still show the presence of Quick Time Event to continue or conclude the challenge. Compared to Ultimate Ninja Storm 3, new interactive sequences have been added, for example in the second demo shown Gamakichi moves on the tentacles of the Ten-Tails to get to him in a sequence on three tracks where you have to avoid the enemy's fireballs.

From a technical point of view, the improvement is evident

Being this the first title on the new consoles it was reasonable to expect a graphic improvement of the product, and in this Naruto Shippuden: Ultimate Ninja Storm 4 does not disappoint. In our two road tests we noticed a clear improvement in the graphic effects managing to maintain an acceptable framerate, even if in some excited sequences we found some drops. Fans of the saga will be happy to know that Naruto Shippuden: Ultimate Ninja Storm 4 will cover all of the manga's latest story arc thus ending the story of Naruto Uzumaki but still nothing is known about the size of the wrestling park available in the title.

Comment The first Naruto title on the new consoles is confirmed as a must for players who love the saga with its solid gameplay and its loyalty to the manga, even if sometimes some liberties are taken by the developers. There remain some doubts about the framerate and the character park that has disappointed fans of the saga in recent years. Pros and cons ✓ Improved graphic effects
✓ Improved musou sections
✓ Always spectacular boss battles x Framerate still unstable

Do you want to be a video game expert and know all the tricks, guides and reviews for your video games ? Holygamerz.com is a group of video game fanatics who want to inform you about the best tricks, guides and tips. We offer you the best information to be a reference in gaming, so here you can find guides, tricks, secrets and tips so you can enjoy your games to the fullest. Are you ready to get all the achievements of that game that you resist so much? Enter now and enjoy your favorite video game to the fullest!
Special With the pad in hand: sales rankings from 29/5 to 4/6 ❯