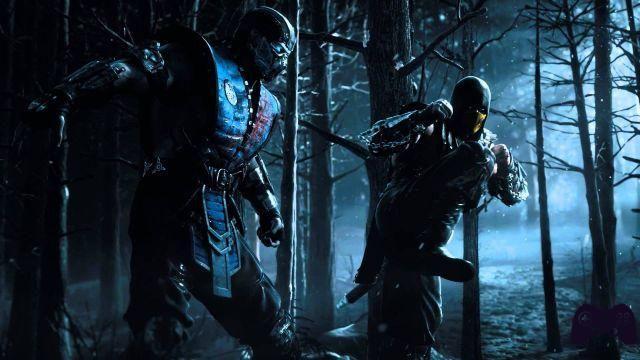 The transition from 2D to 3D was one of the biggest revolutions in the gaming world, and like any self-respecting revolution, it could not fail to demand a "blood toll": in particular, fighting games can easily be included in the list of genres most influenced by change, between the emergence of "native" series of the third dimension and the difficulties of adaptation suffered by some historical franchises. Mortal Kombat four years ago he managed to go back to basics with a successful reboot on which now NetherRealm Studios (Midway was historically behind the series) tries to build the tenth iteration of the saga. What was the final result?

Great attention to the narrative component

Although it is a fighting game, Mortal Kombat has always paid some attention to the narrative aspect, and obviously this tenth chapter is no exception. The events resume the story there where the previous chapter had left it, thus continuing with the "alternative timeline" created in 2011 thanks to Raiden: on the one hand there is the civil war there is the rebellion that involved the Outer Kingdom due to the power vacuum caused by the death of Shao Kahn, the other Quan Chi and his army of Undead (which includes some "good" historians such as Liu Kang, Jax and Kung Lao among its ranks). In the middle of the Earth, where the survivors of the old guard are training some "sons of art" such as Cassie Cage (daughter of Johnny and Sonya Blade) and Kung Jin, Kung Lao's cousin.

Sorry for the many characters only "smelled" during the story, waiting for the DLC

Everything is packaged with a decidedly cinematic cut, minimizing the "gap" between cutscenes and meetings and sometimes offering some quick time events during the filmed scenes. The approach works and manages to accompany the player along the approximately three hours necessary for completion, but suffers something when he comes across what has now become the real bogey of the players when it comes to fighting games: the characters inserted via DLC . In fact, it is not uncommon for characters inserted only in the movies but not to be faced in-game (we mention Fujin on all) and characters who instead appear only as enemies, such as Baraka and Kitana. The base roster "stops" at 24 characters (plus Goro, available as a pre-order bonus) and therefore excludes from the group of known faces and new entries some historical names of the series, which we expect to make their appearance as downloadable content.

The skeleton is that of the last chapter, but the novelties proposed improve the experience as a whole

The 24 characters proposed, however, in a certain sense are worth triple: in fact, each of them can count on three different fighting styles (to be selected before the end of the meeting), which starting from a common base then add special moves and exclusive combos to the character according to their characteristics. Sub Zero, for example, will be able to use the classic ice clone only by choosing the "Grand Master" variant, while thanks to "Indestructible" he will gain the opportunity to use the Frozen Aura (a sort of ice armor) and a barrier to protect himself from attacks , leaving the exclusive prerogative of the combos based on ice weapons to the "Cryomancer" style. The other big news, even if it would be more correct to speak of return, concerns the Brutality, finishing moves similar to the iconic Fatalities introduced by the series but which require the fulfillment of certain conditions during the encounter to be performed. Finally, to graft onto the successful "playful skeleton" of the last chapter there is also the possibility of interacting with some elements of the scenario, using them to move more quickly from one part of the screen to the other or to inflict damage on the opponent (by throwing him for example barrels, torches or the unsuspecting passers-by on the field). Overall, therefore, the experience, while relying on the foundations laid in 2011, is richer, deeper and, to put it briefly, better. compared to the already valid one of the last chapter, while remaining faithful to its nature and therefore without introducing technicalities that have never belonged to the series.

Lots of modes, including the successful online component

The play structure described above is put to good use in the different modes entered by NetherRealm Studios. In addition to the already dissected story mode, it is possible to try your hand at climbing the Towers (there are both the traditional ones, in which you simply face series of opponents at a given difficulty, and the Living Towers capable of changing over time, as well as a series of challenges " social ”where the aim is to beat a friend's score by playing a procedurally generated tower) or face the AI ​​(or another player) in a single“ normal ”or modifiable (random or player-chosen) match. Particular attention was paid to the online structure, which offers in addition to classic PvP (in turn divided into classified and unclassified encounters) the War mode between Factions. Once the player has chosen the faction to be part of between Lin Kuei, Black Dragon, Brotherhood of the Shadow, Special Forces or White Lotus, he will receive points for each action performed in-game: every week then the faction with the most points will be elected Champion faction, with consequent rewards (always in play) for its members. Anyway in our battlefield test the netcode almost always behaved very well, without causing particular slowdowns and proving to be up to the not simple task of making physically distant fighters fight each other. We also thought the presence of the Quitalities was really appropriate, which in the event of a "Rage Quit" by the opponent involves the explosion of the head (and the awarding of the victory to the player left in the game), making fun of the "problem" in perfect Mortal Kombat style.

The Kripta is a welcome extra in first person

Finally, the developers have introduced a "first person dungeon crawler" style mode called Kripta, through which it is possible to spend the tokens accumulated by playing to open tombs and chests scattered on the map and unlock sketches, extras and behind the scenes on the development of this tenth chapter. The focus is all on exploration (there is also a map in the pause menu) and with the exception of some enemies to be killed with quick time event shots, we proceed quietly in the search and collection of the bonuses or objects necessary to advance. In this regard, however, it should be noted the possibility of running into a "blocking" bug that can prevent the player from interacting with some objects in the scenario, effectively not allowing him to explore the entire area made available.

The beauty of Fatalities

From a technical point of view, everything is in place

Except for the aforementioned Kripta bug on the technical front, there is practically nothing else to report: Mortal Kombat X is essentially consistently fluid and performs exactly as expected from a fighting game of this caliber., benefiting in this version for PS4 and One of a graphic layout that thanks to the many details present on the screen (both in the arenas and when performing the Fatalities) embellishes the whole. The sound is also excellent, which accompanies the various games without any problem both as regards the actual tracks and by analyzing the sound effects of the various attacks. P.romosso also, unlike the last chapter, dubbing, which while not reaching particular levels of excellence and this time does its duty and does not evoke the feeling of grotesque it had four years ago.

Verdict 8.5 / 10 God Shao Kahn Comment Mortal Kombat X is exactly what we expected, that is a version on steroids of the more than convincing 2011 reboot. the playful offer without distorting the essence of the series and introducing technicalities that are not part of the product's DNA. Even the roster that at first glance seemed a bit "undernourished" instead thanks to the presence of the fighting styles is ultimately adequate, waiting for the now discounted DLC to replenish it from the point of view of the faces present. Pros and cons ✓ The news works
✓ Almost technically flawless
✓ Lots of content ... x ... But a few too many defections on the roster
x The Kripta suffers from a blocking bug
Do you want to be a video game expert and know all the tricks, guides and reviews for your video games ? Holygamerz.com is a group of video game fanatics who want to inform you about the best tricks, guides and tips. We offer you the best information to be a reference in gaming, so here you can find guides, tricks, secrets and tips so you can enjoy your games to the fullest. Are you ready to get all the achievements of that game that you resist so much? Enter now and enjoy your favorite video game to the fullest!
Bravely Default II review, a pleasant return to the past ❯

Dragon Quest Heroes Review: The World Tree and the Roots of Evil

Assassin's Creed Valhalla review, the review: is it worthy of the name?