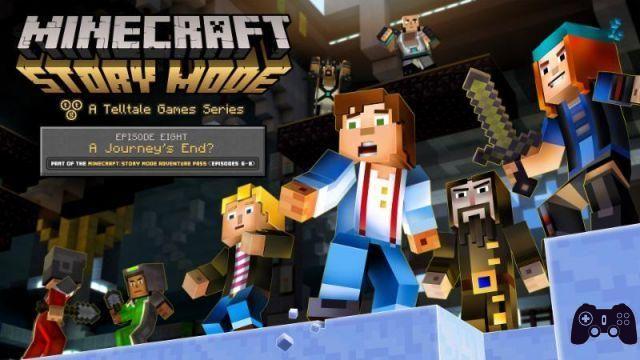 On October 13, 2015 Telltale ventured into the world of Minecraft, trying to give a plot to the land of Mojang, presenting Jesse and the Order of the Stone. Eleven months later, also thanks to the expansion of the series thanks to a special Adventure Pass, Minecraft: Story Mode comes to an end, with the eighth and final episode entitled A Journey's End ?. Will Jesse's adventure have a happy ending? As for the other episodes, this chapter is also available via Adventure Pass, or Stand alone for € 4,99 on PlayStation 4, PlayStation 3, Xbox one, Xbox 360 and PC (the arrival of the last three episodes on Wii U).

In what is in effect the final review of Minecraft: Story Mode (or at least of the first season), references to all previous chapters, especially to Access Denied, cannot be missing, while we will try to limit references to the plot of this latest episode.

For the last time: Previously on Minecraft Story Mode

Jesse and his companions have found access to the world of the Old Builders, after defeating PAMA and stealing his heart, the four members of the Order of the Stone and their guide Harper begin to climb the stairs that will lead them to their final destination. The world of the Old Builders is a huge arena where travelers are divided into teams and forced to participate in killing games. Once dead the contender will be regenerated as a miner and forced to work in the quarries in search of other material, until he is deemed worthy to participate in the games again, in a continuous loop. Jesse and his cronies find themselves involved in spite of themselves, and to defeat Hadrian (the leader of the Old Builders) they will have to come out triumphant and thus obtain the Atlas, the sacred book that will allow him to finally return home.

A Journey's End is completed in about two hours and proves to be a good series finale, but not at the height of what, at the end of the season, still remains the best chapter of Minecraft: Story Mode - A Block and an Hard Place (as we always repeat the fourth episode would have been a great ending for the first season, turning chapters 5 to 8 into a second). Jesse manages to stand out above all the other protagonists, and a good job has also been done in the characterization of Hadrian, although it follows the cliché of the bad Bondian. A Journey's End? tries to answer all the (few) doubts put into the pot by Telltale in the last two episodes, not sparing some mystery for a possible second season (Soren's books).

Do you remember crafting?

We have never hidden how with the passing of the months the interest in Minecraft: Story Mode has been waning, and with it with each episode the crafting sections of the great protagonists of the Season Premiere decreased more and more. also in  A Journey's End? we will meet at the working table only once, while there will be the Quick Time Events and the classic phase in the running that characterized the previous seven episodes. The absence, or the little presence of crafting, in a title based on a brand that makes crafting itself its essence, leaves you stunned: it is also true that Telltale's work was keen to give a plot to the universe of Minecraft, and with eight episodes behind them they have succeeded almost admirably with few highs and unfortunately many lows. Nothing new either from the technical front, where the title offers the same performances seen in the past eleven months, and on the dubbing which is still probably the highest point of the entire production dedicated to the Mojang brand, so we refer you to the previous reviews for have some more details in this respect.

Verdict 6.5 / 10 Eeeee Credits! Comment with A Journey's End? Telltale's adventure in the world of Minecraft ends (for now), after eleven months of releases and expansions. Minecraft: Story Mode is certainly not the most exciting work of the software house, and the extension of Jesse's adventures after an excellent fourth chapter still make us turn up our noses months later. Despite this, the dubbing of the production and the characterization of the protagonist are to be commended, which has grown dramatically over the course of the eight episodes. Now that Telltale has concluded the adventures of Jesse and associates (worthily in spite of our doubts of last month) it remains to be seen how it will carry out the next projects. Pros and cons ✓ The long-awaited finale
✓ Good dubbing
✓ Good characterization of the protagonist x No major news
x Virtually no crafting

Do you want to be a video game expert and know all the tricks, guides and reviews for your video games ? Holygamerz.com is a group of video game fanatics who want to inform you about the best tricks, guides and tips. We offer you the best information to be a reference in gaming, so here you can find guides, tricks, secrets and tips so you can enjoy your games to the fullest. Are you ready to get all the achievements of that game that you resist so much? Enter now and enjoy your favorite video game to the fullest!
News + Microsoft acquires Bethesda. Xbox exclusives ❯