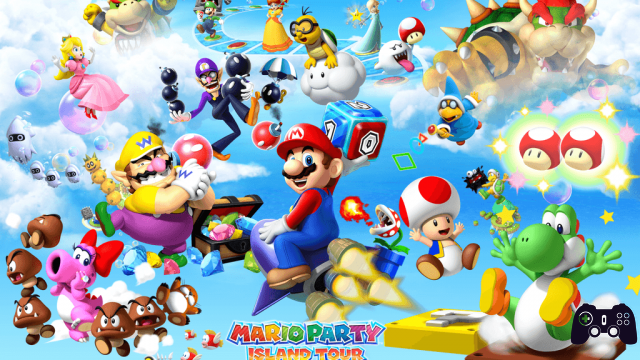 The Mario Party series was born in 1998 as a videogame variant of the classic game of the goose, where the pawns are the characters of the Mushroom Kingdom and the rivalry between the players is punctuated by many minigames that intersperse each roll of the dice. Starting from 2005, the series also debuts on Nintendo portable consoles, with the discreet Mario Party Advance for GBA and in 2007 with Mario Party DS, released on the double-screen laptop of the same name; in the meantime, on the home console, the brand reaches the ninth chapter.
On January 17, 2014 it will arrive in stores Mario Party: Island Tour, third portable chapter of the series that tries to make space among the numerous titles for hardcore gamers present on 3DS and attract the numerous casual players, thanks to some innovations introduced. Will he succeed? Let's find out together.

Mario Party: Island Tour's story mode is called Bowser's Tower. The evil King of the Koopas has decided to infest the game islands with magical bubbles, capable of taking on the appearance of Mario and his associates. To destroy the infernal bubble-shooting machine, located at the top of the building, you will need to choose one of the nine characters available at the beginning and climb the very high tower to the sound of mini-games and boss challenges.
Each floor of the tower will offer a choice between two mini-games, if you manage to triumph against the bubble clones and win the chosen game, the character will be able to advance level by level until the clash with Bowser.
The artificial intelligence of the opponents will not be an obstacle even at the most advanced levels, unless the game in question requires a dose of luck as well as skill. It is precisely on the distinction between skill and luck that causes the first flaw of Mario Party: Island Tour: if the mini-games based on skill prove to be simple even at the Master level (the highest difficulty, ed), those based on luck tend to favor the CPU a little too much, making the continuation in the tower really complicated. Fortunately, even if you go into Game Over and lose the mini-game, you can repeat it indefinitely until you come out on top, or decide to try the other option.
The mini-games available in Mario Party: Island Tour are more than 80, some of which are fun and able to exploit all the potential of 3DS, from the gyroscope to the touch screen, but most will turn out to be a mere copy of the first ones, re-proposing the same game in a different environment or with different enemies. Little imagination in development by Nd CUBE which fails to guarantee the variety of the first Mario Parties and to carry it on a laptop.

The heart is the board

The real focus of any Mario Party has always been the scoreboards and this has never been more evident than on the Island Tour. The title gives us seven different scoreboards (the last one will be unlocked, ndGuido) each with its own particular rules and different victory conditions:

The seven boards are fun and diversified from each other but we would have sincerely appreciated the possibility of speeding up the time when it is the turn of the CPU-controlled characters, especially if they face them alone, as the waits prove exhausting and not suitable for the shorter gaming sessions.

The more the better

As per tradition, to fully appreciate Mario Party: Island Tour, you will need to find yourself with at least one other friend simply equipped with 3DS, thanks to the possibility of downloading completely for free, through the Download mode, all the boards and individual minigames of the title. This allows up to four friends to play by buying a single cartridge, getting the best of the title of Nd CUBE Co., although we must admit that we will have appreciated an online mode, unjustified absent in the Island Tour, which allowed distant players to compete on the scoreboards. This absence does nothing but diminish the appeal of the game, reducing the time dedicated to the title to the tests of the scoreboards and to group evenings with other 3DS owners. A wasted opportunity to increase the playability of a title that has to make its way through many big guns even in multiplayer, such as Mario Kart 7, Animal Crossing: New Leaf and Pokémon Versions X and Y.
Furthermore, the almost total absence of extras of any kind, which are simply reduced to the songs of the soundtrack, to an extra character and to the scoreboard we have already talked about, further undermine the longevity factor, leaving Island Tour to a much smaller audience. , both in age and in numerical size.


The appearance of the Island

Technically, Mario Party: Island Tour shows defined polygonal patterns and no frame drops during mini-games; all the title is fluid and does not slow down, whether with 3D active or not.
The songs of the music sector draw both from the old Mario games - for example on the Rocket Race board we will be able to listen to the main theme of Super Mario Galaxy - and completely new songs but not at their peak.
All the texts of the title are translated into other languages ​​and the instructions of the mini-games are accessible to readers of all ages, something that we can now find in all the titles translated and adapted by Nintendo.

Mario Party: Island Tour is currently (or rather, it will be from January 17th) the only Nintendo party game available for 3DS, and for this reason it is recommended only for that slice of casual players who like to spend the evenings in the company of their friends on the sofa with the 3DS in hand.

Verdict 6.5 / 10 Roll the dice, I feel lucky Comment Although good under the technical side, there are too many defects of this Mario Party: Island Tour, which will only be able to entertain those who have friends who own 3DS while, due to the absence of an online mode, is bound to bore the lone player. Pros and cons ✓ Just one card is enough to play with friends
✓ Some minigames are really fun ...
✓ Fun in a group x Boring as hell alone
x ... but most are repetitive
x Lack of online mode
x Very few extras
Do you want to be a video game expert and know all the tricks, guides and reviews for your video games ? Holygamerz.com is a group of video game fanatics who want to inform you about the best tricks, guides and tips. We offer you the best information to be a reference in gaming, so here you can find guides, tricks, secrets and tips so you can enjoy your games to the fullest. Are you ready to get all the achievements of that game that you resist so much? Enter now and enjoy your favorite video game to the fullest!
Quake Champions preview ❯

Life is Strange Ep.2 - Out of Time review