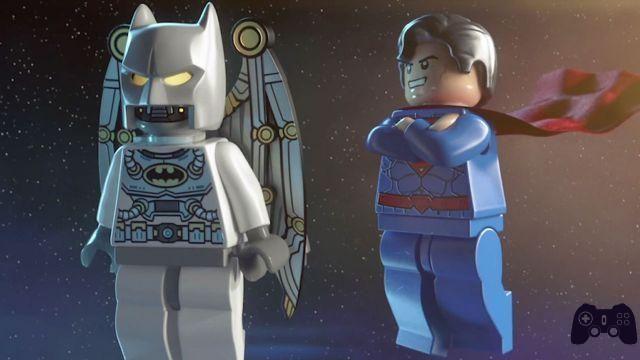 One of the most successful LEGO licenses, so much so that it even slips into the film The LEGO Movie, is definitely the brick counterpart of Batman: Bruce Wayne's alter ego returns to all consoles for the third time in the history of titles developed by TT Games for Warner Bros IE.
With LEGO Batman 3: Beyond Gotham, the Dark Knight will have at his side the whole Justice League, a large group of villains and the Lanterns of every emotional spectrum.

In space, no one can hear you laugh

Batman and Robin are chasing Killer Croc into the sewers as, hundreds of light years away, Lanterns of every emotional spectrum find themselves surrounded by an army of droids and spaceships, all under the leadership of the insane Brainiac, world collector android.
The sentient robot captures the seven fighters and heads for the earth, to shrink it and add it to his collection.
Meanwhile, the dynamic duo discovers that Killer Croc does not work alone, but follows the orders of Lex Luthor and Joker, who are determined in every way to take over the Watchtower, the main base of the Justice League.
While the nearly-full Justice League has a blast with the aforementioned criminals, Brainiac makes his entrance by hitting heroes and villains with lantern lights and starting to shrink the Earth.
The change of emotions of the rest of the cast will force Batman to team up with the Joker, in a strange alliance against a common enemy, bigger and stronger.

This is just the beginning of Lego batman 3, which will offer for the first time in the LEGO brand, a subjective selection of levels (from mid-game onwards) allowing the player to decide which planet to visit first.
For the duration of the main plot and for most of the secondary missions, we laugh thanks to the comedy with which TT Games has accustomed us in the past nine years, that comedy that from silent, gained its voice with the Crusader brick alter ego Hooded and now giving a great Spanish dub, for the first time on a licensed title (The debut of the Spanish dub in a LEGO game took place last year with LEGO City Undercover).

the main goal of ttgames is to make people laugh

Comedy sometimes consisting only of jokes or senseless and out of place answers, but that they will not fail to make even the darkest fans of the Bat Man smile.
In the now canonical fifteen chapters, Batman will literally go beyond Gotham, visiting Europe, Space, and all the planets of the Hub (the home worlds of the seven Lanterns), expanding the experience provided by TT Games with LEGO Batman 2: DC Super Heroes .
The ten hours needed to complete the story is added to the following twenty, dedicated mainly to completists, who will have bread for their teeth with the now classic speed challenges and the hunt for over two hundred golden bricks and almost 150 characters available.
Finally, how Stan Lee in LEGO Marvel Super Heroes, in Lego batman 3 you'll have to save an icon from the DC universe (or at least the television one): none other than Adam West, the Batman of the 60s TV series, who has ended up in countless problems in every area of ​​the game.
West is not the only Guest Star: Kevin Smith, Conan 'O Brian and none other than Green Loontern, the alter ego of Duffy Duck who played in the Green Lantern corps, also appear.

The dress does not make the Bat-monk

As in the two previous chapters, also in Lego batman 3 we will have costumes for our characters, useful for overcoming obstacles or solving puzzles.


the perfect title to relax and have a laugh

If until today these "extra powers" were exclusive to the Dynamic Duo, in this new adventure we can also use them with Cyborg, Lex Luthor and none other than the Joker.
In addition, each member of the Justice League, and each Lantern of the Emotional Specter, has its main feature, which will allow you to find secret red bricks and minikits scattered around the planets, as well as vary the gameplay at each level of the story.
The only flaw of this system is to favor the most loved characters, leaving the borderline heroes to the role of extras, or with fewer gadgets than the comics counterpart.
The combat phases against the henchmen, be they androids or remote-controlled dentures, continue to follow the basic mechanics of LEGO games: with a square you will inflict blows, with a circle you use a special power or a finishing move, with a triangle the characters able to transform will change shape (or costume) while X is obviously dedicated to jumping (or flying where possible).
This command interface, especially the transformation linked to the triangle button, becomes problematic during Free Play the mode that has always allowed you to use any character and change it at any time, most of the time preventing the change (often using Superman, the latter will continue to disguise himself as Clark Kent, instead of leaving the room to another hero).
The gameplay of LEGO Batman 3 is still dedicated to casual players, without peaks of difficulty or nerve-wracking parts, the perfect title to relax and have a laugh after a long day.

Beyond Gotham, for real

In addition to the classic gameplay that has been the protagonist of every TTGames title for nine years now, Lego batman 3 introduces two new mechanics.
The space battles, which very closely recall those protagonists of Resogun, where you will find yourself driving a spaceship or a character with cosmic powers in a scrolling shooter with a cylindrical setting. By defeating enemy spaceships, you will get different power ups and the ability to hit the boss with homing missiles.
The Virtual Challenges instead (VR) will catapult the Caped Crusader into a world similar to that of Tron, where in each of the 24 proposed battles, a certain action must be taken. The challenges also mention arcade classics like Pac-Man and Snake: unfortunately completing them does not represent any difficulty , as the lives will be unlimited as in the rest of the game.

If from the first levels it seems that TTGames has abandoned the Open World exploration limiting everything to the Bat-Cavern, the Watchtower and the Criminal base, after the sixth chapter the Fulcrum will be made available, from which the player can reach seven other planets (and the moon) each of which is dedicated to a Lantern of the Emotional Specter and full of challenges and collectibles (and of Adam West in danger).

a decent result in air controls

Speaking of racing challenges, one of the main problems with LEGO titles is the gameplay of the aerial stages: with Lego batman 3 TTGames finally manages to guarantee a decent and not unnerving result as in the past, finally setting the quota with the right analog and no longer on Circle.
Thanks to this improvement and the many things to do throughout the cosmos, LEGO Batman 3: Beyond Gotham turns out to be one of the best licensed LEGO titles ever.

From a graphic point of view, Lego batman 3 it does not enjoy the Next-Gen transition (probably due to the release also on the old platforms) but it remains pleasing to the eye and the characters are perfectly recreated in their brick counterpart.

Some technical problems may occur (unless in the past), linked to the interlocking of the characters in a certain point, which will force you to restart from the checkpoint or in the worst case to restart the level, technical errors that we are willing to forgive thanks to a almost completely perfect audio sector.
Almost perfect because if the dubbing is excellent and the soundtrack draws from both the films and the animated series, the combination between the two is not adjustable in any way: many of the dialogues during the real phases of the game are dominated by the music in the background, requiring absolute silence in the game room, on the other hand the OST is not adjustable, but only completely deactivable.
Finally, a small detail on the adaptation of the game: some names have not been translated (Saint Walker, Star Sapphire) when the literal translation is still used in the comics today (Santo Viandante, Star Sapphire).

Verdict 8/10 Better than Nolan's Batman Commentary LEGO Batman 3: Gotham and Beyond manages to repay the wait, even if it proves more a title focused on the entire Justice League than on the Dark Knight itself. He will be able to give fun and laughter to all the pretend LEGO titles and Batman fans, young or old, thanks to the comedy that pervades the whole TTGames title. In addition, the developers are finally able to provide decent gameplay for the air modes, filing away one of the main flaws of the past titles. If you are a fan of Batman, LEGO Batman 3 is a title that cannot escape you: feel free to add half a point to the final evaluation. Pros and cons ✓ A must have for all Batman and DC heroes fans
✓ Many things to do
✓ Spanish dubbing Excellent
✓ Improved flight system x Some problems in the audio
x Controls not always accurate
Do you want to be a video game expert and know all the tricks, guides and reviews for your video games ? Holygamerz.com is a group of video game fanatics who want to inform you about the best tricks, guides and tips. We offer you the best information to be a reference in gaming, so here you can find guides, tricks, secrets and tips so you can enjoy your games to the fullest. Are you ready to get all the achievements of that game that you resist so much? Enter now and enjoy your favorite video game to the fullest!
Etrian Odyssey V review: Beyond the Myth ❯

God Eater 3 Review: Stick to the past

Add a comment from LEGO Batman 3: Beyond Gotham review