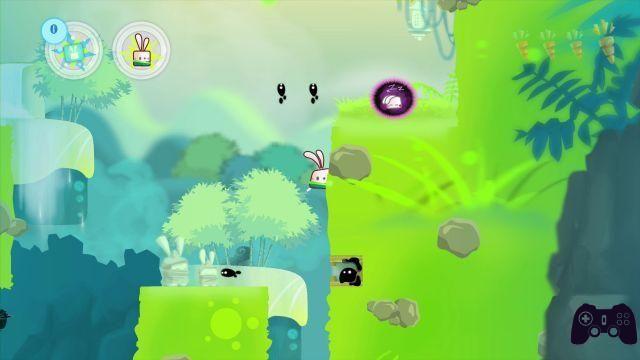 Last year, on iOS and Android devices, it arrived Kung Fu Rabbit: an action platformer inspired by Super Meat Boy gameplay. The game, developed by cTools Studio, is distributed for free using the micro-transactions for any upgrades and expansions. Neko Entertaintment, a French team also known for Puddle, has decided to take care of porting Kung Fu Rabbit to Wii U, launching it on the eShop at a price of € 4,99 but abolishing microtransactions.

A small village of kung fu-loving rabbits is attacked by mysterious black aliens, who kidnap all the little inhabitants except one, our protagonist, who will have to make his way through the 8 worlds to free all his friends from the clutches of extraterrestrials.
This in a nutshell the simple plot of Kung Fu Rabbit, which is certainly not the strong point of the game but is the glue to the 160 levels, divided precisely into 120 main and 40 secrets; every time we complete a sequence of 20 levels we will be able to enjoy a small animated scene in the style of a cartoon table, which will explain us how the story of our rabbit continues.
The first twenty secret levels, on the other hand, will be unlocked automatically by completing the main sections, with a practical message that will appear on the screen and / or on the GamePad. By completing the first four worlds we will unlock as many, called "Hardcore Rabbit" for the higher difficulty compared to the first half of the game, here we will find ourselves in the same settings already visited, but with more obstacles and enemies to defeat, an exceptional stratagem to lengthen the longevity of the title while improving the challenge factor. For the most impatient, that is, for those who want to test the highest difficulty immediately, just spend 50 carrot points for each extra world, obtainable by collecting the orange or golden vegetables scattered throughout the levels.

The gameplay of Kung Fu Rabbit is all based on the correct and precise pressing of the A button obviously combined with the directional cross; while in the mobile version the control was completely touch, in the Wii U version we are faced with an immediate platform with a constant challenge.
The goal is, as in the most classic of platformers, to reach the end of the level, represented here by a sleeping bunny; Obviously getting there will not always be a walk in the park, especially in the 4 Hardcore worlds, Kung Fu Rabbit will test the skills of fans of the genre, including thorns that sprout from the walls, moving or friable platforms, puddles of deadly black sewage and spitting bullets, literally outside the walls.
Our leporid will also have to fight against the little black aliens, each of which will have a weak point painted blue that will be touched or, otherwise, it will be certain death; we will not have to press any button, in fact it will be enough to approach the aforementioned point of the opponent to make the rabbit attack him mercilessly, making him dissolve in a cloud of smoke.
In the unfortunate case we fall into the deadly black mud, an enemy hits us, or we will be crushed, our bunny will kick the bucket, but will start again more sprightly than before from the beginning of the level, even if he will have to collect the carrots again, and defeat another turn the alien monsters. Even if we have to start the area all over again, there will never be a Game Over screen, in Kung Fu Rabbit there are no lives nor a time limit to complete the levels, and this is also an advantage for the players. not very familiar with platform mechanics.


One tool to rule them all

We have already talked about how the carrots collected in the levels can be used as game currency, to unlock the Hardcore difficulty, but above all to buy the tools from the dojo, which in the mobile version used microtransactions, while in this new version of Neko Entertainment, they will be able to be bought easily without having to spend another euro.
The tools are divided into four main categories, we have those consumables for single use, ranging from a simple checkpoint, which can be used at any time so as not to have to restart the level in case of death; to a patch-shaped muzzle that blocks the spitting of the surrounding walls to the player.
There are the Artifacts, which once bought will always be available and can be equipped at any time, and which guarantee various benefits, for example the Carrot juice allows us to go faster; Master of Arms, he will instantly kill the enemy, ignoring the weak point; Feet of Ice will slow the destruction of brittle walls and so on.
The last two categories are mostly a visual embellishment, in fact we have the clothing, which unfortunately is limited to only two costumes for our rabbit, and two automatic upgrades, one that reveals any secret passages to reach the Golden Carrot and the other showing us where we last died.
The artifacts make the game much easier, especially in levels full of enemies, where normally you have to calculate the perfect timing to eliminate or dodge them, equipping our "Weapons Master" leporid we can start carelessly towards the end of the level, as if quest last was free of opponents.
This decrease in difficulty was justified in the mobile version, given that all objects could only be obtained through microtransactions, and that therefore the player actually paid to pass the level, in the Wii U version it only turns into a trick to not improve their own skill and finish the game first.

Rabbits on the Gamepad

Neko Entertainment has managed to bring the colorful graphics of the cTools Studio game to Wii U, which does not lose its comic nature and which can be enjoyed entirely on the gamepad, without even once looking at the TV.
Unfortunately this is the only interaction with the new Nintendo controller, and no new modes or new challenges have been added, making it all just a great port with improved controls.
The sound sector is also the same, and unfortunately even if they are pleasant at first you will soon find yourself having your pockets full of the few songs present, repeated in a loop for the entire duration of the level.

Kung Fu Rabbit remains an excellent 2D action platformer, and in these times of famine for Wii U, Neko Entertainment manages to give us a little gem at a small price to pass the time with our gamepad, comfortably seated on the sofa.

Verdict 8/10 And god said Kung, and Kung Fu. Comment To give Kung Fu Rabbit a chance, it was enough to watch the trailer, combined with the price with which the game was launched, it was wonderful to find a great platformer in your hands. With its fast and immediate levels, the title is suitable for both short sessions and large gaming sessions; unfortunately once the 160 levels are finished with all the carrots, the title is not replayable to improve scores or other, so it will hardly be taken back in hand after being 100% completed. However, Kung Fu Rabbit remains a title that cannot be missing in the digital library of every Wii U owner, either for the freshness of the game, or for the still little choice. Pros and cons ✓ Fast and colorful levels
✓ Definitely excellent value for money
✓ Growing challenge x Some items make the game too easy
x It hardly takes advantage of the Wii U Gamepad

Do you want to be a video game expert and know all the tricks, guides and reviews for your video games ? Holygamerz.com is a group of video game fanatics who want to inform you about the best tricks, guides and tips. We offer you the best information to be a reference in gaming, so here you can find guides, tricks, secrets and tips so you can enjoy your games to the fullest. Are you ready to get all the achievements of that game that you resist so much? Enter now and enjoy your favorite video game to the fullest!
Preview The Legend of Zelda: The Wind Waker HD ❯

Chronos Review: Before The Ashes - Review - Xbox One