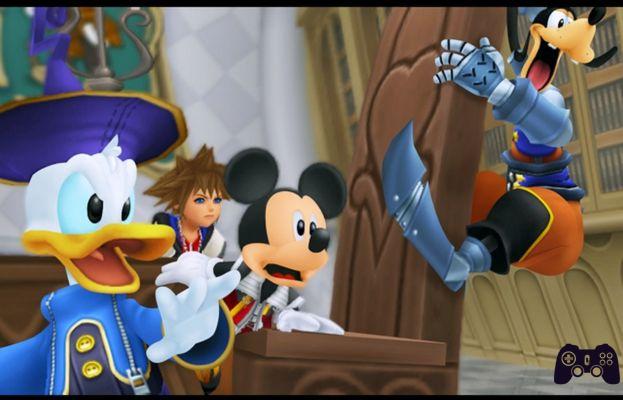 On January 14, the DS remake of the mobile chapter of Kingdom Hearts arrived in Europe, released for Japanese mobile phones in 8 episodes between 2008 and 2010.
The story of Kingdom Hearts RE: Coded takes place after Kingdom Hearts II, when King Mickey, Jiminy Cricket, Donald Duck and Goofy return to the Disney Castle. Cricket rereads the Grillario and finds a mysterious phrase: "Their pain will be relieved when you return to put an end to it". He then takes the Grillario to the King and he decides to digitize it to discover the meaning of the sentence; however, "bugs" or errors are driving the digital worlds into chaos. Mickey then asks for help from a Virtual Sora, who will have to eliminate bugs by traveling in the 7 available worlds.

As in Kingdom Hearts 358/2 Days, even in Re: coded the leveling system will not be the traditional one. In the first moments of the game we will in fact be shown the Status matrix from which we can adjust the level of difficulty (among the four available as usual), learn new skills, equip more command or object slots and take advantage of the bonus machines to receive more experience or more objects, depending on the situation.
To enhance the status matrix, as if we were to upgrade the motherboard of a PC, we should apply upgrade chips, available in various models, including those of level (LV + 1), those of physical strength (For +2; +4; +6), magical (Sp +2; +4; +6), defense (Def +2; +4; +6) and enhancement or elemental defense (ex: antifire + 2; + 4 / Energy + 2 / + 4) .If we manage to manage these chips, connecting two or more CPUs together (marked with a lightning bolt, one unlocks after each world) the effect of the chips between them will be doubled.
Moving on to the command slots, we will be able to have up to 9 slots available (3 initial and the others unlockable in the status matrix) and as in Birth by Sleep, two attacks can be merged to create a more powerful one. For the objects the same thing applies, at the beginning we will be able to equip only one accessory but, by enhancing the status matrix, we will be able to wear as many as 6. Some areas of the status matrix are blocked by special bugs, red and yellow, overcoming certain challenges, or finding rare blocks in the worlds, further achieving better skills.

Tell me your world and I'll tell you your gameplay.

In addition to the excellent graphics for a chapter on DS, the highlight of this Kingdom Hearts is the gameplay. Most of the time, while exploring the world, or battling with lesser heartless and some bosses, the gameplay is the classic of Re: coded's big brothers.
When our Virtual Sora enters a lock to heal the bugs of the world we will find a whole new gameplay for a Kingdom Hearts.
We will have the Super Mario style scrolling platformer in Middle City, a vertical scrolling level driving game style in Wonderland, we will join Cloud and Hercules in an early Final Fantasy style classic RPG party in Olympus, a platform with puzzles and sliding platforms worthy of Mario Galaxy in Agrabah, and finally we can order Donald and Goofy to protect us, fight heartless or destroy blocks at the Dark Fortress. In short, there is something for all tastes, even the last world (which I will not reveal to you) has a particular gameplay, I leave you the surprise of discovering it.
What if someone wants the classic Gameplay of every Kingdom Hearts? There is that too of course! Before you get to the lock, you will always have to explore the world for bugs, reward items, and secret doors.

All that glitters is not gold.

But alas, even in this game there are some imperfections, first of all the damned camera which unfortunately is not automated, and more than once during the battles you lose sight of the virtual Sora, which is covered by walls or by opponents, making the frustrating challenges.
Second flaw is the duration of the story, in addition to its scarce usefulness for the purposes of the general plot of the saga, it can also be concluded in less than 18 hours, a time never seen for this series, which usually runs at least around 25-30 hours. only for the standard story; moreover, only the last chapter including the final and secret ending is useful for the purposes of the total plot of Kingdom Hearts.

Trophies in Kingdom Hearts were introduced with Birth By Sleep but, if in the PSP chapter they were just an extra, in Re: coded it will take 20 trophies out of 30 to unlock the secret ending, and believe me it will be worth it.
Also Re: coded adds the Avatar mode, where the player can create their own chibi character; this mode can also be used to wirelessly communicate with friends, swapping clothes and accessories for your avatar (there are a lot of characters available from all square games and all KH episodes).

Verdict 7/10 There is a key for every lock Comment With the gameplay variety, and the graphic beauty, Kingdom Hearts RE: Coded is sure to play for any fan of the saga. But for the cost of the game, the story is definitely too short, especially since it is an Action RPG. The secret ending only makes the desire for the third home chapter grow, which I sincerely hope will not be long in coming. Pros and cons ✓ Visually the best on Nintendo DS
✓ Varied and never repetitive gameplay
✓ CG scenes in large quantities x Obscene camera
x Duration of the story less than all the other KHs
x Useless plot except for the final and secret chapter

Do you want to be a video game expert and know all the tricks, guides and reviews for your video games ? Holygamerz.com is a group of video game fanatics who want to inform you about the best tricks, guides and tips. We offer you the best information to be a reference in gaming, so here you can find guides, tricks, secrets and tips so you can enjoy your games to the fullest. Are you ready to get all the achievements of that game that you resist so much? Enter now and enjoy your favorite video game to the fullest!
News Season pass coming to The Legend of Zelda: Breath of the Wild ❯

Add a comment from Kingdom Hearts RE: Coded review