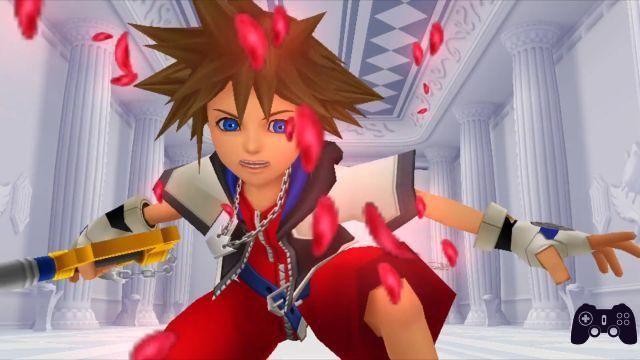 It made its debut in Japan back in March 28, 2002, and then arrived in Europe on November 15 of the same year, Kingdom Hearts it was one of the most beloved action-RPGs ever. As a demonstration of the enormous success achieved all over the world, the role-playing game created by Square-Enix, with the collaboration of Disney, has seen for over a decade the progressive development of new chapters that continue the events. And not only that, since over the years there has been a very large production of action figures and gadgets dedicated to the series and a manga has been created that re-proposes the adventures in a slightly comic key. On 13 September 2013, however, a collection was published, Kingdom Hearts HD 1.5 ReMIX, containing Kingdom Hearts, Kingdom Hearts: Chain of Memories and Kingdom Hearts 358/2 Days. But let's take a closer look at the work done in this PS3 exclusive collection.

One Sky, one destiny

In this HD remaster, you will take on the role of Sora, the chosen one of the Keyblade, and his friends, accompanying him through the events ranging from the first Kingdom Hearts up to the events immediately preceding Kingdom Hearts II. Your adventure will start from the Isle of Destiny, in search of your friends, Riku and Kairi, with the support of Donald and Goofy, whose goal is to find King Mickey. On board the Gummiship you will travel through the beloved Disney settings, with the addition of landscapes created from scratch. Between worlds, you will face thousands of Heartless, beings born from the darkness of hearts. Defeated the dark forces, Sora's journey will continue in the Castle of Oblivion, a place where memories will play a fundamental role. Here you will meet new antagonists, who will accompany you for a long time in the continuation of the chapters of the franchise. After this chapter of the incredible story of Kingdom Hearts, the spotlight will shift to Roxas and Xion, two characters whose destiny is inextricably linked to that of Sora.

A keyblade, a card and a cutscene

The game mechanics vary totally for each of these three chapters. Starting from the beginning, what we will have is an action-RPG in which your character's actions will be dynamically managed from a side menu. Instead, your allies will be managed by the CPU. What made KH I spectacular is precisely the spectacularity of the fights that, even after years, manage to satisfy the public, old or new. But if it can be said that the gameplay of the first chapter has aged well, that of Chain of Memories is younger than ever. Your character's actions, this time, will be managed by a menu, whose actions depend on special cards in your personal deck. In all likelihood this is one of the most innovative gameplay ever for an action-RPG, a gameplay that has the merit of making a title of the caliber of Chain of Memories, which until the collection was released was a privilege only for GBA owners. The sore point comes with KH 358/2 Days, of which Square-Enix proposes us only in videos, remastered in high definition. In this case, unfortunately, the gameplay is totally absent. Unfortunately, it must be said that this highly questionable choice made a product of great value decidedly incomplete.

Contrary to what one might expect, the KH 1.5 HD ReMIX does not boast a simple high definition remastering job. In addition to the addition of trophies, thanks to this collection, the people of gamers have been able to see the arrival of the version Final Mix by KH I, which introduces new content and new optional bosses. But not only that, even the game mechanics have been slightly revised, in order to bring them closer to those of KH II, which have the pride of being much more practical. In Chain of Memories, however, new cards have been added, obtainable after completing 358/2 Days. In fact, these cards can only be obtained once all the trophies relating to the latter have been unlocked. As for the ex-exclusive DS title, the movies and narrations are profoundly useful to fully dissect the lore of the world of Kingdom Hearts, however, as already mentioned above, the choice not to report the game mechanics is very questionable. . The discovery of the events of KH 358/2 Days will keep you busy for a few hours only, not to mention that, due to the absence of gameplay, you may be led not to read many of the proposed summaries, only to complete it 100% before giving start your adventure in Chain of Memories.

A redesigned graphics not too well

Prior to launch, Square-Enix claimed to have lost the original Kingdom Hearts assets. Because of this they were forced to redesign the polygonal models of the various characters from scratch. The result, if on the one hand it is excellent thanks to the high definition and a fantastic color, on the other hand it is definitely disappointing. What we find ourselves in front of are totally inexpressive faces, which remain identical even on different angles, creating very embarrassing situations. In 358/2 Days, on the other hand, we witnessed some terrible scene changes, similar to the gaffes you see during the shooting of a film: characters first hooded, then no longer and then hooded again, all during a simple change of visual. In short, if the new graphics are spectacular, Square-Enix's remastering work was too hasty, leading to defects on the border between embarrassing and annoying. As for the soundtrack, however, the judgment can only be positive. Just as then, the Kingdom Hearts franchise boasts one of the most fascinating and beautiful soundtracks in the world. These music will accompany the player on his adventure, making everything more exciting.


Verdict 8/10 A collection that will open your hearts Comment Kingdom Hearts HD 1.5 ReMIX is an excellent opportunity for new players to experience the adventures of these three great Kingdom Hearts, as well as for old fans it is an excellent opportunity to replay with glories of the past, able, despite the years, to excite always and in any case. However, Square-Enix's hasty work could disappoint many fans given the havoc with regards to graphics. We just have to hope that with the 2.5 the work is more meticulous, keeping up the name of the chapters of the franchise from which they come. Pros and cons ✓ Kingdom Hearts Final Mix and RE: Chain of Memories in Europe
✓ New content
✓ Always young gameplay
✓ Always exciting soundtrack x Hasty remastering
x Kingdom Hearts 358/2 Days gameplay is missing

Do you want to be a video game expert and know all the tricks, guides and reviews for your video games ? Holygamerz.com is a group of video game fanatics who want to inform you about the best tricks, guides and tips. We offer you the best information to be a reference in gaming, so here you can find guides, tricks, secrets and tips so you can enjoy your games to the fullest. Are you ready to get all the achievements of that game that you resist so much? Enter now and enjoy your favorite video game to the fullest!
Batman: The Telltale Series (Nintendo Switch) review ❯