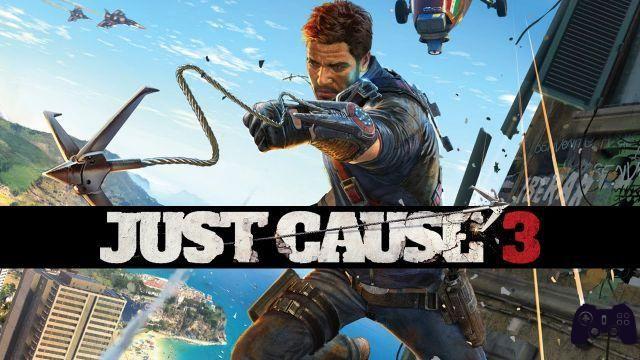 But how beautiful it is to fly around

The starting point is necessarily the solid one of the second chapter, with some refinements here and there

The demo present at Milan Games Week did not contain any part of the story, thus reducing spoilers, and only served to show the gameplay of Just Cause 3 in its debut on the next generation consoles. The first thing we noticed during our test was the map extension, similar to the one of the last chapter but, thanks to the better components of the current gaming machines compared to a few years ago, much more detailed and with a high visual extension that allows players to plan their actions well in advance, as well as being able to study the best path to reach the goal. To do this Rico (the protagonist) can either use motor vehicles (cars, trucks and helicopters to give some examples) or the grapple to move quickly between the various structures and operate the parachute which, unlike the last chapter, will not be used. both to move (there will be the wingsuit to facilitate these maneuvers) as well as to allow yourself to study the situation from above and be able to act accordingly. We arrived in the city featured in this demo thanks to the car that Rico owns from the beginning, and we noticed how the driving system has been tweaked compared to the previous title without changing it particularly; the car will have more degrees of destruction based also on its size, starting from a small hole in the rear glass to the complete disintegration of the vehicle, with a spectacular explosion that puts Avalanche's attention to detail before the player's eyes and shows the muscles of the consoles that arrived about two years ago. Once in the city there was the possibility to walk the streets with the citizens, use the grapple to climb buildings and study the landscape or try to eliminate the police forces that command the place. Once the revolution has started by attacking any agent, an indicator will appear on the screen, in GTA style, with the stars indicating the danger of Rico and the quantity of soldiers that we will find facing us and, in order to avoid them arriving in droves, we will have to eliminate the commander ( promptly signaled by an on-screen indicator) that he is calling the base for reinforcements. Some doubts we had during our test derive from these sections: the shooter component was quite subdued to us and this, combined with a camera system and a not yet perfect Artificial Intelligence, made Rico's task difficult and we often found ourselves having to escape in order to understand how to deal with it all.

This is next gen!

Just Cause 3 graphically is really jaw-breaking

Just Cause 3 graphically is truly impressive: Avalanche has done an excellent job with the representation of the Medici archipelago, where the events of the game will take place, which unites mountains to climb and from which to dive with the parachute to suspended bridges over expanses of water. All always with an impressive detail that highlights the characteristics of the platforms for which it is intended (Playstation 4, Xbox One and PC). Technically, in addition to the camera problem, we found the unstable framerate quite annoying which partially ruined our test even though we were told that this is one of the very first builds and will surely be fixed in time for the release next December. We did not have information instead on a possible dubbing in Spanish of the title even if given the precedents there should be no doubts about its presence.


Comment Just Cause 3 is certainly one of the most anticipated titles for this end of 2015 that is not defined as crackling. The game promises the same fun as the previous ones with the addition of a respectable graphics sector thanks also to the power of the new generation consoles. Some doubts remain on the technical side since both the camera and the framerate were unstable even if it was a fairly old build. Pros and cons ✓ How nice is the grappling hook
✓ Amazing graphic effects
✓ Good guidance system x Framerate dancer at the moment
x Camera to be reviewed

Do you want to be a video game expert and know all the tricks, guides and reviews for your video games ? Holygamerz.com is a group of video game fanatics who want to inform you about the best tricks, guides and tips. We offer you the best information to be a reference in gaming, so here you can find guides, tricks, secrets and tips so you can enjoy your games to the fullest. Are you ready to get all the achievements of that game that you resist so much? Enter now and enjoy your favorite video game to the fullest!
News The Walking Dead: The Complete First Season arrives on Switch ❯