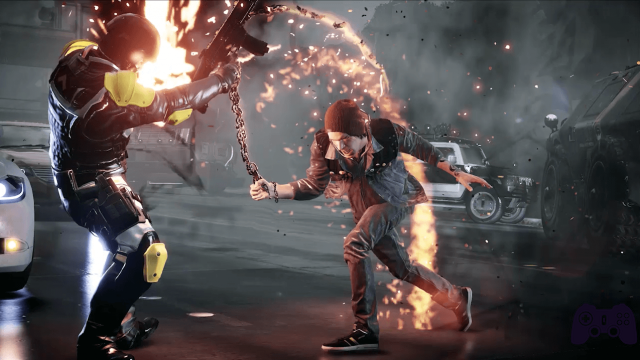 One of the most interesting intellectual properties arrived on the market over the last generation is certainly inFamous. The open world action-adventure signed Sucker Punch based on super powers was able to emerge from the "pile" of similar productions thanks to a thick narrative system (and with a certain wink to the world of American comics ), a solid and rising gameplay between one chapter and another and above all the "crossroads" structure, developed in order to influence the game experience in the round rather than limiting itself to acting only on history and replayability. About three years after the release of the second chapter, Sly Cooper's "fathers" try to reinvent the series in a next-gen sauce with a new chapter (and a new protagonist) on Playstation 4, a game machine that is very healthy from the point of view. from a sales point of view but a little in difficulty in proposing a high-profile exclusive able to establish itself on the market.

The events told in Second Son take place seven years after the events of inFamous 2. In an attempt to keep the Conduit (beings endowed with superpowers) under control, the government creates a new organization, the DUP (Department of Unified Protection) which, having completed the task and captured all the "bioterrorists" in freedom, it is now being disposed of and is transferring the detainees into the hands of the army. And it is during one of these transfers that Delsin Rowe, the writer protagonist of the game and member of the Akomish tribe, manifests for the first time his skills as a "sponge for powers" by coming into contact with Hank, a captive Conduit able to manipulate the smoke. But to complicate matters, Brooke Augustine, director of the DUP and also endowed with powers (concrete manipulation) will intervene and interrogate Delsin and the whole tribe in search of information using extremely violent and persuasive methods. A week later the only Akomish to have fully recovered is Delsin, while all his other acquaintances are practically condemned to death due to the concrete blades present in their bodies. Unless someone absorbs the powers of the Augustine and saves the tribe from the sad fate to which they are doomed ...

The plot is well told, but it has less bite than the other two chapters

Under the front narrative the only ones to report are about a well told plot but with less bite compared to the second and (especially) to the first chapter of the series. As for the characterization of the protagonist instead Sucker Punch brings a breezy and decidedly successful Delsin to the screen, always ready for the “Spider-Man” joke, not forgetting some more serious attitude when needed.

Lots of smoke, lots of roast

The gameplay proposed in this third iteration of the series is a close relative of that observed in the second chapter on PS3: on the solid play system already observed during the last generation, the new powers of Delsin are grafted, which will be able to absorb from other Conduit during the course of adventure, that avoid the feeling of deja vu and at the same time allow the adoption of some solutions that best lend themselves to the free roaming structure of the experience. Once a power has been unlocked (4 in all, although some additions via DLC or the free Paper Trail expansion, which will be available on day one of the title) cannot be excluded, it will be possible to "switch" between one skill and another. absorbing the basic element of power from objects located on the game map, a passage with a certain "three-dimensionality" at the level of immersion thanks to the choice of starting the absorption sound from the TV and then passing it to the speaker of the Dualshock 4. Although the basic skeleton of each power follows a common pattern (the square button allows physical attacks, the circle activates the shooting skill useful for moving more or less quickly, R2 is dedicated to "basic" medium distance shots while R1 and L1 are used respectively to launch those that in the old games were the "missile" and the "grenade") each power has its own characteristics and introduces variations on the effects of executable moves, as well as varying the damage and "rate of fire" of each ranged attack. Trying as much as possible to avoid spoilers and referring only to the powers of Delsin already shown in the trailers, the powers related to smoking for example are more oriented towards damage and speed of execution in combat and movement in the air as regards roaming ( without forgetting the possibility of climbing buildings in zero time using the ventilation ducts), while the neon is more functional for fast movements on the ground and in battle it appears more precise, thanks to the possibility of activating a sort of "bullet time" by aiming if you follow the heroic karmic choices or highlight the weak points of each enemy if instead you follow the path of the infamous, killing them instantly by hitting the areas in red or using non-lethal force by acting on the parts in blue. The solid gameplay is then combined with the artificial intelligence of the enemies, which is able to test the player even already at the normal difficulty level and on more than one occasion it forces you to opt for a more tactical approach (also thanks to the possibility of silently eliminating enemies if they are taken from behind) and take advantage of all the skills available to Delsin, rather than throwing yourself into the fray without thinking.

In addition to the powers, as already seen, the player's attitude from the point of view of karmic choices also weighs on the game economy, which in addition to influencing access to some of the abilities of each power changes the cards on the table even when it comes to performing the "final moves" of each power: in case you are aiming for the title of Hero to be able to complete the karmic series it is necessary to perform a certain number of "good deeds" (save surrendered enemies, immobilize them instead of killing them ...), while if you play with the reputation of Infamous the aim is to take out a certain number of enemies consecutively. Helping in the climb to the two extremes are secondary missions and events scattered throughout Seattle, ranging from knots of anti-Conduit protesters to interact with (peacefully or otherwise) to checkpoints manned by DUP members where the 'goal, in addition to sedating / exterminating the enemies, is to free or kill any prisoners present in the detention cages.

The Dualshock 4 is fully exploited, but without overdoing it

The secondary objectives related to Delsin's "career" as a writer focus on the potential of the Dualshock 4, using the controller's motion sensors to simulate a spray can by performing the actions that are ordered on the screen. There are also classic collectibles, represented by automatic drones that once destroyed give the player fragments to be used as a "bargaining chip" for the unlocking of new skills and upgrades linked to each power according to the methods already seen in previous chapters.


Smoke in the eyes

from a technical point of view, Second Son is in all respects a next-gen product

From the visual point of view inFamous: Second Son is in all respects a next-gen product: during the realization Sucker Punch opted for a Full HD resolution in order to enhance the graphic sector of the work (and the particle effects due to the powers of Delsin), coming down to some compromise on the framerate that however it remains solid and without drops on 30 frames per second. The only technical problems are to be found in some glitches of interpenetration of the polygons that afflict some elements on the map and in an unrealistic management of some situation (the inability to swim is not justified in any way and Delsin's reaction when he is "run over" by some vehicle, which simply sees the protagonist slip following the motion without receiving damage). Sins "of youth" not such as to affect the gaming experience but from the point of view of the new generation leave a bitter taste in the mouth, since they stain an overall level product.

Verdict 9/10 The reason to buy PS4 Comment Wanting to sum up the whole review in one sentence, inFamous: Second Son is the reason to buy Playstation 4. Fans of the series will find a product that definitely lives up to their expectations, which takes the good things seen in the two past iterations and expands it to the maximum terms on the gameplay front. Those who have never approached the series will still be able to fully appreciate (or almost, given a surprise in the credits for the most attentive players) the work, given its independence from the events of Cole seen on PS3. The only defects of the title are to be found in some minor technical problem and in a certain involution on the narrative front, not so much for the "how" the story is told as for the lack of a plot at the levels of the first chapter or of a "Sword of damocles" on the head which was The Beast in the second. Pros and cons ✓ Fun and extremely replayable
✓ The new powers work
✓ Dualshock 4 exploited with "knowledge of the facts"
✓ Technically really next-gen ... x Except for some graphical glitches
x Narratively a little below the other two chapters
Do you want to be a video game expert and know all the tricks, guides and reviews for your video games ? Holygamerz.com is a group of video game fanatics who want to inform you about the best tricks, guides and tips. We offer you the best information to be a reference in gaming, so here you can find guides, tricks, secrets and tips so you can enjoy your games to the fullest. Are you ready to get all the achievements of that game that you resist so much? Enter now and enjoy your favorite video game to the fullest!
News + Tesla Could Collaborate With The Witcher And Cyberpunk 2077: Nerd Marketing? ❯