How to take screenshots on Windows 11 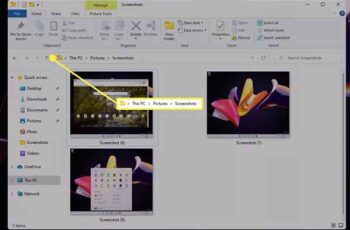 
Using the Print Screen button, you will capture the entire screen, including all displays if you have more than one, plus all visible windows, the taskbar and the Start button, etc. Once done you can then paste the screenshot into any program that supports image editing.

How to take screenshots on Windows 11

This method is super useful if you need to take a lot of screenshots. Just hold down the Windows key and the PrtSc / Print Screen key on your keyboard.


The full screen screenshot will be saved in the Pictures> Screenshots folder. A quick way to access this folder is to quickly search for the folder: screenshot in the search box on the left side of the left icon at the bottom left on our PC.

How to capture a part of the screen

This three button shortcut Win + Shift + S activates a much more useful snipping tool than PrtSc alone. It still allows you to capture the entire screen, but there are also three other techniques you can use.


After pressing these three buttons together, the screen will go blank and a small menu will appear at the top of the screen. There are four buttons that allow you to take different types of screenshots. Here's how to use them:

To avoid having to remember this keyboard shortcut every time you need to take screenshots on Windows 11, you can link it to the PrtSc button so that when you press the aforementioned button, this same menu pops up automatically.

To do this, open the Settings and search Screen capture to change the call option Use the Print button to open the screen capture.

Delay Screenshot with Capture and Annotate

Go to the search box in the taskbar and write Capture and annotate to open the app. Taking screenshots of open menus and other areas of Windows can sometimes be difficult if taking the screenshot interrupts the work you were doing.


Capture and Annotate has an option called “Delay Capture Creation”, it allows you to take a screenshot on Windows 11 hands-free.


Tips for capturing the screen in Windows 11

Once an image is loaded into Capture and Annotate, use the crop tool to further define which part of it you want to save, without having to take the screenshot again.

If your desktop background includes colors or shapes, it is sometimes shown in the screenshot. You can avoid this by setting the background to all white.


Create an outline around the screenshots created with Capture & Annotate by opening the app settings and enabling Capture contour. You can choose any border color you like best.

How do I take a screenshot on Windows 10?

Use the key combination Windows+PrtSc to capture the whole screen or use the Snipping Tool to select a mode, choose the time to delay the screenshot and adjust the settings from the Options box. Another way to take screenshots on Windows 10 is to use the Game Bar by pressing Windows + G and selecting the icon Capture to take the screenshot.

How can I take screenshots on a Windows 11 laptop / laptop?

You can use the methods described above, you can take screenshots using keyboard shortcuts or the Capture and Annotate tool. If your laptop assigns more than one function to the PrtSc key, you may need to use the key combination Fn+PrtSc to save images in full screen.

How to stop call center calls on your iPhone, Android and landline ❯

add a comment from How to take screenshots on Windows 11