HDD vs SSD: differences and advantages of both types of hard drives 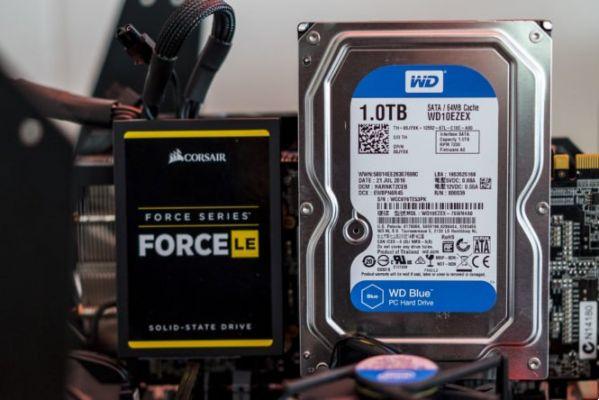 What is the difference between SSD and HDD? HDD or SSD hard drive, the big question when buying a storage drive. We tell you what the differences and benefits of each are and which one you should buy according to your needs. When choosing a computer or assembling a computer from scratch, one of the big questions that is presented to the user is to choose the storage system that one needs, HDD o SSD?

What is the difference between SSD and HDD?

How to erase all data from a hard drive: complete guide >>

Although a few years ago there were not many alternatives for memory drives, nowadays we have many combinations and storage options: from a laptop with a solid state drive ( SSD ) to a desktop computer with a standard hard drive ( HDD ), also going through a combination of both: an SSD used as the primary disk where the operating system runs, and an HDD for everything else.

For this reason, if you are planning to buy a new computer or build your computer from scratch, it is no surprise that you are wondering how to choose the type of storage HDD or SSD or the one that best suits your needs. We will resolve these doubts by explaining the differences between the two and will guide you to help you choose.

What is a hard drive and solid state drive?

L'hard disc o HDD (Hard Drive Disk) is the hardware used to persistently store (do not cease to exist once the drive is turned off), the data of a computer. A hard drive is a metal plate that uses a magnetic recording system to store all kinds of files, from a Word document to a multi-million dollar project on new virtual reality glasses.


By writing to several rotating discs the information is recorded and the thinner the discs, the better the recording will be. For this reason, disks of the same size can have different storage capacities. These units have evolved since their creation in 1960, normally doubling their capacity every year and a half.

Drives that typically use HDDs or hard drives are desktop or desktop computers, laptops, and business servers.

A solid state drive or SSD it works exactly like a HDD with one difference, the files are stored on a chip with flash memory interconnected with each other. These chips can be included in the terminal motherboard (such as in some small laptops), in a PCIe card, or in a box similar to a permanent hard drive. One of the features of these chips is that they are capable of retaining data even when there is no power flowing through the system.


Laptops, tablets and smartphones are the most used devices, by default, SSD. We must not forget that some devices such as digital cameras use this type of memory to offer a shorter response time and to store more images in external storage systems such as SD cards.

Advantages and disadvantages of HDD and SSD hard drives

Before analyzing what are the differences between these filing systems we must establish a basis: theHDD andSDDs have the same function, they store your files. There are several features and uses for which it will be more beneficial to use one or the other, this is what we are about to explain right now:

One of the key factors in choosing which storage system to choose is the budget we have, after all, money is what will limit our options.

To put it in a more practical way, a 1 TB hard drive costs less than 50 euros and an SSD of the same capacity costs more than 150 euros.

The second factor that determines which system to choose is the amount of data storage capacity that our storage devices can cover. Archives are getting bigger nowadays, at the same time files need to be accessed more quickly and efficiently. Introduced the problem… What are the options?

Once again we will have to consider the price of each unit.

For everyday use, the speed with which we can access the files on our computers, move them, modify them or delete them is very important, both from the point of view of a home user and a professional user. Therefore, it is another variable to consider.


There isn't much to explain here: SSD or solid state drives are superior in speed and performance to hard drives. A computer with an SSD will run faster, with a reboot in just five seconds.

A computer that has the operating system installed on a HDD can take much longer. With an SSD, you will have better performance, so if you want to have a fast computer you will choose an SSD without much doubt.

Each storage system is built differently and will be more prone to breakage or damage.

A hard drive is much more likely to malfunction than an SSD under the same conditions.

Fragmentation is the process by which (the word itself says it) files are scattered across the storage drive. Only hard drives suffer from this feature

Another factor to consider when choosing a storage system is the size of the drive. There are some obvious physical limits depending on the terminal we are about to choose or mount.

Although a priori it may seem that noise is not important when using a computer, it is a factor that must be taken into account and that can make the difference between choosing one storage system or another. A music producer who does not have the means to record in a room outside the computer needs a terminal that is as quiet as possible.

Conclusion on what is the difference between SSD and HDD?

At this point, you should already be able to know which storage system you should be using. But if you still have doubts, let's make a small summary by adapting the needs in different profiles.

You will be interested in acquiring a hard drive if you are among these users:

Buy a solid state drive or SDD if ...

You will be interested in acquiring a solid state drive if you are among these groups:

How to use RAM as a hard drive? How to create RAMDisk? >>

add a comment of HDD vs SSD: differences and advantages of both types of hard drives