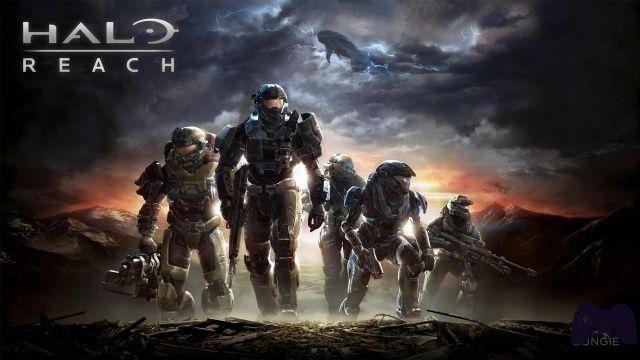 With the burden of the final chapter of the trilogy, the developers had the hard task of not disappointing the many fans of the saga. As in the ODST spin off, in Halo: Reach we will not have as the protagonist the now iconic Master Chief but a whole new team of brave Spartans ready to do anything to stop the advance Covenant. Reach is in fact a prologue to the events of Halo where we will relive the last moments of the homonymous planet destroyed by the inexorable advance Covenant. The lack of epicness of the previous chapters has been covered more than enough by the more advanced war scenario and the human factor of the characters.

Ready for the end

Unlike its predecessor Halo ODST, the game is more familiar to fans. The team element that destroyed the idea of ​​the perfect soldier in ODST has been changed, leaving behind the key factors but focusing more on our character. In fact, our task will be to replace a deceased member of the Noble team, an elite team of Spartan 2 (soldiers upgraded later and not by the youth as Chief) deployed on the important terrestrial colony of Reach. What will make us remember the old glories is the background of our character, who has always fought alone showing off-the-beaten-track abilities on the battlefield. Apart from a small introduction, the game is a continuous succession of action able to always entertain, also thanks to the interesting new additions. Speaking of new additions, the guys at Bungie have fleshed out the gameplay with new weapons and really well designed gadgets. The old items from Halo 3 have been replaced with armor upgrades that give each one a different ability, such as the Armor Block that will make us invulnerable for a few seconds. Enhancement that further opens up the gameplay is the Jetpack, which will make us fly across the battlefield in both singleplayer and multi modes. The developers have also refreshed the armory by adding some exclusive weapons such as the DRM or by changing existing weapons, such as the Covenant Carbine with the Needle Rifle. Excellent choice to vary the game style, but very technologically in contrast with the chronology that places Halo: Reach before Halo Combat Evolved. As for the enemies, in this chapter we will be able to deal with the same types of aliens already seen, some modified under the visual point (such as the Brutes). In fact, to make everything fresher, the Covenant graphics have been updated with new armor and colors that differ according to the rank of the opponent. Enemies will also be more responsive and merciless than before, thanks to improved AI.

From the beginning, you know the end, this is the slogan of the last Halo that leads us to fight in vain the Covenant forces as the last bastion of humanity. In fact, our role will be to relive the last moments of the Noble Team who sacrificed themselves for the good of humanity.
The story of the game reserves enough twists even though it already knows the end and manages to make the player become attached to his teammates. The charisma of the characters is well designed and each of them fits perfectly in their role. The guys at Bungie have in fact decided to put the human factor more in the foreground than in previous games, making everything more realistic.
The gameplay is the same as the old titles, linear footfights against armies of enemies and frantic levels aboard vehicles. Interesting addition is the ability in one level to pilot a space fighter to attack Covenant ships orbiting the planet.
For Halo fans, the game will show the key facts of the story so far only seen in the various books but, even for those who enter this universe for the first time, the game will be able to entertain them as apart from a few scenes dedicated to aficionados, the game does not require previous knowledge. The graphics of course (since Halo 3 was one of the first Xbox 360 titles) are the best in the series, really great overall clarity, specially revised particle effects and a physics engine capable of handling a large amount of data.

Multiplayer has always been a fundamental part of Halo and even in this new incarnation it amazes and entertains. The most interesting and profound addition is the Armory, a menu that allows us to completely customize our Spartan or Elite character with many unlockables, as we progress in rank. The historical modes of Halo are all there, plus some interesting new additions such as the return of the Co-op Shootout already seen in ODST and the Invasion mode that will pit Spartan teams against Elite teams. The maps are well-built, for the style of play on which Halo is based, the frenzy of combat is always present and the new hand-to-hand assassination animations make it all more appealing. Even if Bungie has detached itself from this brand, it will continue to update the online with new content (modes, ranks and armor) and DLC making the experience always new.

Verdict 9/10 We miss the Master Chief a little Comment We can say that Bungie has finished the work on this splendid saga very well, managing to overcome the problem of the lack of Chief with a captivating and modern game. For fans it will be a new and interesting adventure, but also for all FPS lovers Halo Reach will be a title to have in their collection. Pros and cons ✓ Theoretically infinite multiplayer
✓ Story worthy for the series
✓ Excellent enemy AI
✓ Well balanced game modes x A few bugs whatsoever
x Allies not always awake

Do you want to be a video game expert and know all the tricks, guides and reviews for your video games ? Holygamerz.com is a group of video game fanatics who want to inform you about the best tricks, guides and tips. We offer you the best information to be a reference in gaming, so here you can find guides, tricks, secrets and tips so you can enjoy your games to the fullest. Are you ready to get all the achievements of that game that you resist so much? Enter now and enjoy your favorite video game to the fullest!
News + Blackout, a new inclusive video game for the blind ❯

Disco Elysium The Final Cut | Review of the PlayStation 5 version