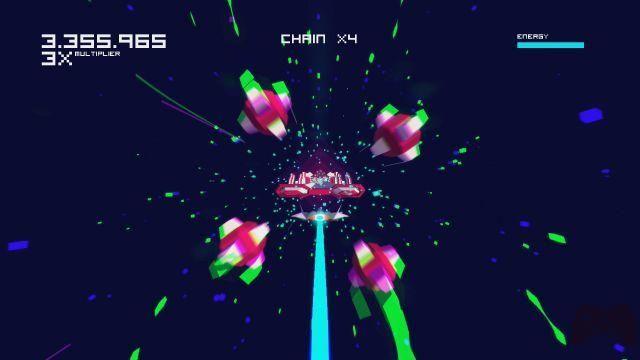 Among the merits of the independent scene there is undoubtedly that of having allowed even the smallest developers to face a wider audience. The clearance of indie titles on consoles then reiterated this, placing these "minor" productions alongside traditional products. Today we return to the subject by talking about Futuridium EP Deluxe, a luxury version of the original space shooter by the Turin-based MixedBag first released on PC and Mac and then moved to iOS. Let's see if the flag flies high also on PS4 and PlayStation Vita.

The first impression is that of a fairly traditional shoot 'em up. And instead…

Futuridum recalls a certain genre of video games from the very first menu, that of spatial shoot 'em ups based on vector graphics (here obviously replaced by real polygons). But discarding this somewhat vintage package, we find ourselves in front of a truly sui generis product: rather than kill crowds of aliens in an "open air" context, the goal is to explore the levels that are proposed in search of cubes, to be destroyed by firing with the X button and taking aim by moving the spacecraft thanks to the left stick . Once these have been eliminated, the “core” of the level will finally come to light, a (another) white cube that once destroyed allows you to move on to the next area. The peculiarity of the spaceship is that it cannot stop or slow down, “Condemning” the player to a sort of perpetual motion that can be altered (by moving, accelerating with R2 or turning the shuttle 180 ° thanks to the square key), but not stopped completely or slowed down. To give a time limit to the search for the cubes, the shuttle's energy bar intervenes, constantly decreasing (also here, not completely stopped but only curbable for a few moments when destroying the cubes) from the beginning of each level.

Some more arcade touches are not missing

Some arcade legacy could not be missing in all this, represented as well as by the accumulated scores in each level (with two different multipliers, one that takes into account how many times the spacecraft has been destroyed and the other of the chain of consecutive cubes destroyed) by the three sub-objectives available in each area: deathcheater (obtained if you complete the level without dying), Lighspeed (if you finish within the time limit) and Chainmaster (given only to players who can destroy a certain number of consecutive cubes).

To make this mix between the arcade shoot 'em up and the exploratory platform work, there is a versatile level design and suitable for the purpose. The 50 levels of the campaign are divided into 5 zones, in each of which the first levels tend to develop in depth and leave more free rein to the exploratory vein. As you proceed towards the tenth (and last) level of each section, the scenario becomes more articulated, starting to arrange the cubes in a more "subtle" way and introducing dangers such as mines, missiles and turrets, until finally reaching extremely claustrophobic and dynamic areas, capable at the same time of reducing space for maneuvers and changing shape at regular intervals. Being able to complete a zone is really a challenge, since in the event of a game over it will be necessary to start all over from the first level (unless you take advantage of any extra credits obtained as a reward). For the more completist players there is a free play mode that allows you to select which level to face again, so you can try to get all the medals in the various levels without necessarily having to replay those already 100% completed. Finally, in the playful package there is also Flappyridium, a sort of MixedBag tribute to the famous mobile blockbuster that roughly incorporates the mechanics.

Promoted both audio and video. Too bad for the absence of Cross-Save

From a technical point of view, this deluxe version of Futuridium does not suffer from particular problems, guaranteeing a fluid and quiet experience both on Playstation 4 and on its portable sister, embellished (as usual) by the Cross Buy offer with its classic "get two and pay one ". In this sense, however, one feels a little lack of another of the offers Sony has accustomed its users to, that of Cross Save., which is the only real flaw in MixedBag's work. Even on the sound front, we can't help but spend nice words about the efforts of the two composers Omar Ferrero and Luca Gasperoni, capable of offering truly catchy pieces that are perfectly suited to the general “mood” of the product. In two words: promoted.


Verdict 8/10 Style? Megaspatial! Comment Futuridium EP Deluxe is in no uncertain terms a title to absolutely try, especially if you are fascinated by a certain type of entertainment that occasionally allows us to put away (almost) all the frills and focus on pure and simple score. The contents are not lacking and, especially if you aim to collect all 150 medals, the challenge is not even. Soundtrack and Cross Buy then add value, with the only drawback of the lack of Cross Save which would have allowed you to start playing in the living room and then continue everywhere. Pros and cons ✓ Original and fun
✓ Soundtrack always "on the piece" x Cross Save is missing

Do you want to be a video game expert and know all the tricks, guides and reviews for your video games ? Holygamerz.com is a group of video game fanatics who want to inform you about the best tricks, guides and tips. We offer you the best information to be a reference in gaming, so here you can find guides, tricks, secrets and tips so you can enjoy your games to the fullest. Are you ready to get all the achievements of that game that you resist so much? Enter now and enjoy your favorite video game to the fullest!
#Sounday Special - Cuphead's wild jazz ❯

The Town of Light review