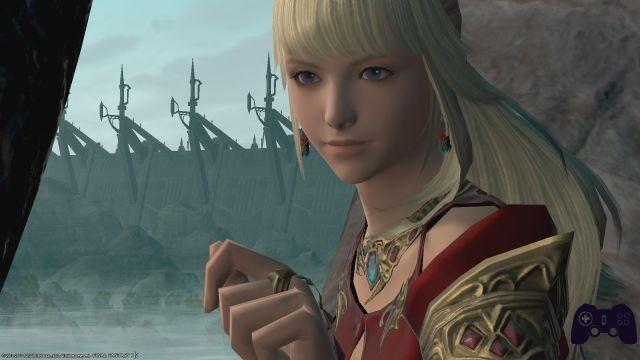 On June 20, 2017, the third expansion of Final Fantasy XIV, much awaited chapter by fans of the MMORPG weblog Square Enix also following the termination of the support of the title on PlayStation 3 accused of being the reason for many of the limitations that weighed on the gameplay of the title. From the various Letter From the Producer LIVE several indiscretions emerged in the courses of the months prior to the release that promised important news on the gameplay, a review of some classes as well as the introduction of new mechanics and a substantial lightening of the whole battle system.

Among the main novelties of the title there is also a newfound attention for the older sister of the Sony flagship: Final Fantasy XIV: Stormblood It is compatible with PlayStation 4 Pro and fully supports its increased computing power and 4K resolution.

This new epic of the Warriors of the Light ad Ala Migho Did it live up to the previous chapters? Or are we facing a wasted opportunity?

Over Baelsar's Wall and far away

In Stormblood, players will visit the “Asian-like” territory of Ala Mhigo for the first time, a place described by some of the most famous NPCs but never visited by players since Final Fantasy XIV: A Realm Reborn onwards. The plot revolves mainly around the idea of regaining freedom following imperial tyranny perpetrated at the hands of Zenos yae Galvus, a samurai son of the emperor, heir to the imperial throne and governor of the Ala Mhigo region.

The Warriors of Light will have to face as always fearsome monsters and make their way in an environment whose population is tested by a long war of resistance with political and social traditions other than those of Eorzea, the ultimate goal is the regaining of freedom trying to awaken the consciences of as many people as possible, indispensable allies against the hordes of imperial soldiers and machinery.

The narrative alternates between ups and downs

The narration alternates between ups and downs, the characters in the dubbed scenes know how to be not only credible but also diabolical, disturbing and at times melancholic. Showing how this MMORPG always wants to go further in enhancing the more cinematic aspect of the title with courageous choices able to represent not only light plots with the good ones who defeat the bad ones, but also more complex plots in which at least some shadow areas of the human soul are hinted at such as resignation and fear of change, as well as the courage and heroism of those who are able not to yield to you. Unfortunately, beyond the main plot, the game is seasoned with a myriad of side quests more or less contextualized in the main plot which, if on the one hand find their raison d'etre in the progression of the character within the 10 levels that bring the player since 60's Heavensward to the 70 of Stormbloodon the other hand they boast an excessive amount of lines in the script resulting in the vast majority of cases of boring interludes that encourage the player to quickly skip the scene to get the reward as soon as possible by destroying everything in front of him.


La lack of localization in Spanish it could, as always, be a limit for many local players since in any case the level of English, French or German required to fully understand the plot in some phases is far from trivial also due to a fair dose of pirate language or archaic. For all the others it is one of the most successful narrative experiences among the mass multiplayer titles able to rival the complexity of other far more long-lived and noble productions.

New expansion is usually synonymous with new level cap and the latter always involves aadding new skills. During Heavensward, players were quite worried about the turn gameplay would take with the introduction of other skills in addition to the large amount already available, especially for those who try their hand at the controller and can take advantage of fewer keys. Fortunately, Square Enix has done a good job in streamlining and overhauling the battle system, combining similar skills, eliminating those that cannot be used, modifying and adding trait and, finally, introducing the so-called Job Gauge, an indicator that comes into synergy with skills and is integrated among the various elements that the player must take into account in managing the flow of combat.

The idea behind this novelty may have originated from a attempt to release from the very heavy limitations imposed during the first two narrative arcs, including careful and almost “mathematical” management of many cooldowns and management of so-called “procs” (effects that occur one-off in a random way). A large number of players fell victim to tunnel vision, or a concentration so focused on your rotation that you completely lose sight of the battle, ending up dying for not having dodged an area attack or not having put into practice a mechanic of a certain boss. By decreasing the buffs available to everyone, making the cross class skills available immediately and introducing the aforementioned Job Gauge, Square wanted to try to make the battle system lighter to digest and master, imposing a single important thing to keep under control. and thus allowing players to have a broader and more peaceful view of the various fights.

Finally, the biggest news of this patch was certainly the introduction of the two highly anticipated new jobs, Samurai e Red Mage, which had an extraordinary success, so much so that for the first time it was almost impossible to enter a single queue for any type of content with the role of DPS without being accompanied by some Healer or Tank.

The seas part for we alone

Having suspended support for PlayStation 3 with the arrival of the new expansion, Final Fantasy XIV has finally broken free of its chains that kept him enthralled, further enhancing the graphics performance on both console and PC. Each player can create more or less realistic characters to their own unquestionable personal taste and the wide range of clothes proposed will satisfy even the most demanding fashion lovers.

The new environments are WELL detailed

The new Asian-style settings are particularly accurate and detailed, effectively giving the idea of ​​a new land with a typically oriental atmosphere. In the city of Kugane you can even meet the unfortunate cousins ​​of the famous Shinsengumi under the guise of "Sekisegumi", a team of samurai whose clothes are very reminiscent of those typical of the special police of the Shogunate. In this new expansion it is still possible fly and admire the landscapes from above, but this time theexploration of the underwater seabed through a spell that allows you to breathe underwater. Too bad that it is a mechanic that is only useful as a narrative gimmick by not adding by itself nothing new to combat or the character's ability to move, just think of the total absence of mounts dedicated only to the marine environment replaced with the expedient that allows the flying mounts to "navigate" underwater creating an alienating sensation at the sight of a Chocobo that "zompetta" cheerfully at the bottom of the sea.

Among the typical elements of Final Fantasy XIV we cannot fail to mention the Primal (also known in Stormblood as Eikon, ed.), which once again manage to break the narrative rhythm with their relative subplots of normal mode and provide a more advanced level of challenge with the Extreme variants. Remarkable the work done by Nobuo Uematsu and by all those responsible for the sound sector in the realization of the OST of these clashes as well as of the Raid, managing to pack a collection of songs able to remain etched in the hearts of the players, many of whom will not be able to help but listen to it again even after logging out.

As previously mentioned, the release of Final Fantasy XIV: Stormblood coincides in many respects with therelease of the PlayStation 3 version and the arrival of full support for PlayStation 4 Pro. After the release of firmware 4.50 the mode had already been introduced turbo boost able to solve some gameplay slowdowns in the most crowded areas making it at least playable around the

30FPS Final Fantasy XIV: Heavensward. With the latest expansion, the developers wanted to overcome this technological limit by putting in the hands of the lucky owners of PlayStation 4 Pro what could perhaps be defined as the missing link with the PC version: players, in fact, can choose the resolution. active and then decide whether to play 60 FPS with excellent FULL HD 1080 quality, or give up some of the fluidity for an experience 4K to 30 FPS.

Leaving aside the aesthetic aspect, it is a considerable leap when compared to the previous versions of the game, compared to the PC edition even with high-end configurations there are no substantial differences regarding 1080p mode. Of course, some of the limitations related to controls as in the previous chapters, although it is possible to use a keyboard to write in the chat, the combat management is entrusted to the controller and a limited number of skill bars to which some pre-configured mappings correspond to move quickly between them during a fight .

As regards the 4K the visual rendering is good, but not excellent. The textures are clean and well defined but not free from defects and if for those who mainly play role-playing the aesthetics of 4K could constitute a more than acceptable compromise even sacrificing fluidity in movements, otherwise it could be perceived by the most demanding and hungry players. of content Savage o Extreme that require quick reflexes and a certain amount of responsiveness that could be compromised when compared to the 60FPS of 1080p.

Verdict 8.5 / 10 But when does Lyse put on her cool dress ?! Comment Final Fantasy XIV: Stormblood drags players into a struggle to free the oppressed, into a whirlwind of battles and political intrigues that have nothing to envy to plots of more noble titles. With the interruption of support for PlayStation 3, Square Enix was able to further enhance the technical sector and revise the battle system to lighten it and make the gaming experience lighter and smoother. The only drawback to this "smoothness" is represented by the disproportionate amount of lines of text and videos that can often be summarized in much less time: a lot of text, whether dubbed or not, leads much more often to pressing the "Skip Cutscene" button rather than actually enjoying the plot. In essence, however, we would like to recommend the purchase of the expansion both to new players, who can benefit from a whole series of bonuses, and to long-time players who want to give this MMORPG another chance. Pros and cons ✓ Exciting storyline
✓ Excellent soundtrack
✓ Content at the height
✓ Totally overhauled battle system x Long-winded dialogues and films
x Not localized in Spanish
Do you want to be a video game expert and know all the tricks, guides and reviews for your video games ? Holygamerz.com is a group of video game fanatics who want to inform you about the best tricks, guides and tips. We offer you the best information to be a reference in gaming, so here you can find guides, tricks, secrets and tips so you can enjoy your games to the fullest. Are you ready to get all the achievements of that game that you resist so much? Enter now and enjoy your favorite video game to the fullest!
Anarchy Reigns Review ❯

Review Atelier Lydie & Suelle: The Alchemists and the Mysterious Paintings

Doom Eternal review is adrenaline injected into the veins