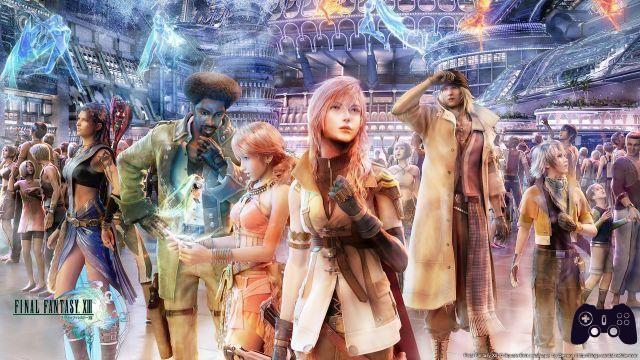 Final Fantasy XIII is the first game of the Fabula Nova Crystallis project, which arrived in Europe on March 9, 2010. It is one of the chapters of the Final Fantasy brand that has caused more discussion in history and that still today, for better or for worse, makes people talk of himself.

A bolt from the blue

One of the strengths of the Final Fantasy brand has always been to guarantee an excellent plot.
Set in the world of Cocoon, the protagonist will be Lightning Farron, whose story will intertwine with that of five other characters. The inhabited world is dominated by the presence of a monarch who is supposed to interpret what is established by the fal'Cie, powerful divinity-like entities that seem to allow life on Cocoon. The peculiarity of the fal'Cie, however, is that they are able to give extraordinary powers to human beings: this is the case of the l'Cie, to whom these powers are given in order to carry out missions. If you fail, the l'Cie become Cie'th, monstrous creatures very similar to demons; those who complete the assignment, on the other hand, will live forever. This task is, more often than not, impossible to accomplish: the mission's objective is in fact revealed through a brief and chaotic vision, apparently meaningless. As Lightning, Snow, Sazh, Hope, Vanille and Fang you will travel the world of Cocoon and Gran Pulse to discover the truth about fal'Cie.

a poor immede-simation by the player

Contrary to what usually happens, for seven chapters out of thirteen you will not have the complete party, nor all the available functions. In fact, this "first" part is structured to function as a tutorial by integrating new features from time to time. The plot is not particularly complex, with a logical thread that is easy to follow from start to finish. Except for the finale, that series of events that are supposed to be twists are totally lacking in epic. This will imply a poor identification on the part of the player, who will rarely be enthusiastic about what he is experiencing. Furthermore, the linear plot seems to want to give the illusion of a complexity of interweaving by dividing, for a first period, the protagonists into several groups.

This is how crystals are born

Final Fantasy XIII brings significant news regarding the battle-system. As happens in the vast majority of previous Final Fantasy, here too it is the ATB to have the main role, allowing you to attack once filled to 100%. Already here you can see the first changes, as this bar will be divided into segments, allowing you to perform actions based on how many of these will be full. The fights are structured to give a certain feeling of dynamism. The party will consist of three members, a leader and two "support" members.

the difficulties arise due to the not always optimal AI

Without having the ability to change the leader in the course of the battle, if he were to die the fight would end. But rest assured, in case of Game Over you will have the possibility to restart immediately before the fight, making the various save points almost useless. While you will give orders to the carefully chosen leader before a battle, the other two will instead be managed by artificial intelligence through the Optimum. This is an evolution, at times not very successful, of the job-system that has characterized titles such as Final Fantasy III. In fact, each character will have roles available, with names that differ from tradition but which in practice are the traditional ones that are seen in every role-playing game. The Optimum are in fact combinations of these roles to be used according to the needs and which are chosen in advance by the player.
The battles will not be particularly complicated and you will hardly be required to spend a lot of time trying to upgrade your characters. Indeed, difficulties often arise because of the artificial intelligence that is not always excellent, especially that of the Therapists. In fact, they will heal allies by choosing which skill to use depending on the HP of each party member. Too bad, however, that the leader does not have priority as such and this ends up leading to a series of Game Over that would otherwise be easy to avoid.
As for the development of the characters, it will be linked to the Crystallium which presents a very simplified structure of the spherography of Final Fantasy X, where each role will have its own path. By taking advantage of the Crystal Points (CP) obtained at the end of each battle, you will "buy" the various upgrades for statistics and new skills related to the developing role. Each circuit is divided into several floors, which can be unlocked as you progress through the story. In addition, each character will have 3 main roles while the others, which will only be available at the end of the game, will be secondary. The main difference is that the former will be much easier to complete and the characters will fully exploit the potential of these roles; in the second case, however, many more points will be needed to progress in the development and the improvements related to the statistics will be minimal. Not only that, the characters will not be able to fully exploit this role, often lacking fundamental skills.

Always go straight, I'll tell you when to turn

The game world of Final Fantasy XIII is almost entirely linear and exploration completely ceases to exist. The only place where it will be possible to explore is Gran Pulse, a wild world and where there is really a waste of time to visit it in its entirety. Despite this, the grandeur of Gran Pulse is not enough to compensate for the linearity of the rest of the game. It should also be considered that there is only one secondary mission and that Gran Pulse will be the scenario in which it will be faced. It will in fact be possible to accept hunting missions to eliminate different monsters, nothing too different from the mission of the Hunt of Final Fantasy XII.

As usual, the most powerful monsters in the game are optional and not mandatory, requiring objectives to be achieved before they are available. What is unusual, however, is the possibility of being able to deal with them indefinitely. In fact, one of these will be available through the Omen hunting missions, repeatable as many times as you want, while the other is one of the random monsters of Gran Pulse. About the random battles, of which little and nothing has been said so far, these will take place in a different way than usual, presenting an evolution of what happened with Final Fantasy XII. The player will easily see with his own eyes the position of the enemies and will be able to decide whether to try to avoid them or to face them. If your reflexes are trained enough, you can get behind the enemy without them being able to notice your presence. If you succeed, you will get a Preventive Action with which you will almost reach the limit of each enemy's Crisis bar. In addition, before each battle it will be possible to use a series of curtains that will grant you certain bonuses for a few seconds during the course of the fight. At the end of each fight you will receive an evaluation based on the strategy used and the time it took to win. This will affect the rewards obtained as a result some items will only be more likely to be won by getting a 5-star rating. To make the game particularly simple, it contributes the fact that, after a fight, the HP will be fully restored. Furthermore, since there is no difference between spells and physical attacks, the strategic component of the game is completely missing, as the player will no longer have to worry about the amount of MP he has left.
Each character will have their own personal invocation, obtainable with the simple progress of the story, as well as each one will have their own type of weapon. The quantity, although appreciable, has nothing to do with the work done in FF12, presenting the same weapons but with different skills. In addition, through special objects it will be possible to upgrade and transform weapons at the save points.


Between wild nature and big cities

Although with incredibly linear maps, the settings end up being varied and well done. It starts from the world of Coocon, dominated by the charm of technology, and then moves on to Gran Pulse, the kingdom of wild and unspoiled nature. The work done by Square-Enix was excellent in this sense, which managed to create, as usual, extraordinary settings. Impeccable is also the work done in the realization of the polygonal models, both of the characters and of the enemies. Too bad, however, the lack of variety of the latter. Retracing a trend already experienced in both FF10 and FF12, the basic models of the various species have been recycled over and over again, changing only the size and details. Although most of the "mascots" of Final Fantasy are absent, such as the giant Tythan for example, there is no shortage of historical creatures such as the Cactus or the Ochu. The dubbing and soundtracks are also well done. If Square-Enix's choices regarding plot and gameplay can be highly questionable, there is little to say about the technical sector of the game which, despite its age, still has a lot to say.

Verdict 7/10 Why exploration is mainstream Comment From what can be seen in the review, Final Fantasy XIII is a chapter that breaks too much with tradition, abandoning the very characters that made the franchise great. The overall title is good, probably deserving a higher rating, but it is forced to suffer the consequences of the name it carries with it. It was all too obvious that nostalgic fans of the game ended up harshly criticizing it and, from our point of view, they have every right to do so. In short, we have a decent game but that has nothing to do with Final Fantasy, giving rise to a new trend that does not seem to want to end. Pros and cons ✓ Intuitive gameplay
✓ Excellent technical sector
✓ Long to be completed 100%
✓ The greatness of Gran Pulse x Mediocre plot
x Too linear
x Little variety in general
x Too simplified
Do you want to be a video game expert and know all the tricks, guides and reviews for your video games ? Holygamerz.com is a group of video game fanatics who want to inform you about the best tricks, guides and tips. We offer you the best information to be a reference in gaming, so here you can find guides, tricks, secrets and tips so you can enjoy your games to the fullest. Are you ready to get all the achievements of that game that you resist so much? Enter now and enjoy your favorite video game to the fullest!
News Dying Light 2 announced ❯