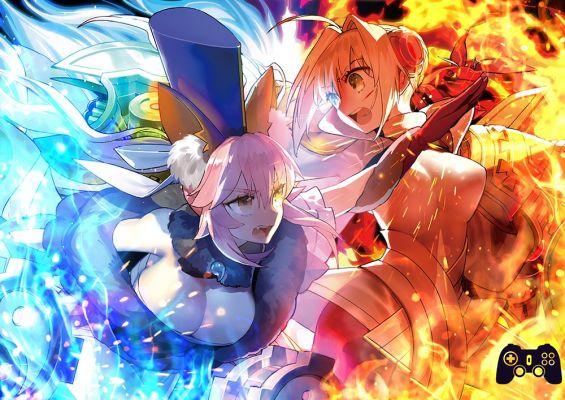 In the universe Fate / Extra, other than that Fate / Stay Night, yet another Holy Grail War took place to conquer the possibility of being able to express any wish. In this series, however, this battle takes place inside the Moon Cell super computer, located on the Moon, where groups of hackers fight each other along with spirits from past ages, called Heroic Spirits, recalled by the SE.RA.PH. (an artificial environment inside the Moon Cell) to stay by their side. The hackers are called "Masters" while the heroic spirits "Servant", these are divided into seven classes: Saber, Caster, Berserker, Lancer, Assassin, Rider and Archer. The Umbral Star ties into the story of its predecessor: the Black Servant Claudius, a Saber, and her Master just won the war and the chance to use the Holy Grail. Together with this Nero gets the honor of reigning, together with our avatar, on the Moon Cell and using all its functions through a ring called Regalia. Mysteriously, however, that is not the only Regalia present on the Moon: even a Caster named Tamamo No Mae and the mysterious Saber named Altera have one and to accompany them there will also be an exact copy of our Avatar. In addition to this Nero will have to investigate the arrival of Velber, a predatory planet, who has attacked the Moon and will try to conquer it and then destroy the planet Earth and all its population.

With this premise on the main story we can start talking about Fate / Extella: The Umbral Star. The main mode is, as you can easily guess, the main story which will be divided into three arcs for each of the three "Queens" of the Moon Cell: Nero, Tamamo and Altera. Once these three stories are finished, it will be possible to undertake the last narrative arc that will work as an epilogue and will reveal all the mysteries that will come to the surface during the last hours of the game. Before each battle we will find ourselves in the room of our Servant, here we will be able to enhance it through the Instant Skills; as our bond with her increases we will be able to equip them with spheres, obtainable in combat, which will increase the attributes or give particular abilities such as the possibility of carrying out elemental attacks or increasing the drop rate of objects in battle. In My Room, we will also be able to create our Code Cast, a set of benefits to be used during fights that include healing of HP or altered status, at the cost of QP, obtainable in battle. Occasionally it will be possible to have dialogues with one of the three main protagonists, by selecting the right option it will be possible to increase the bond and unlock dialogue options that will add details about their personalities and increase the already high fan service.

In Fate / Extella the three Queens are accompanied by other Servants who will act as knights, which is why Type-Moon has decided to tell these characters thanks to a Side Story mode. Here, in a similar way to the main one, the story will be from the point of view of the 13 secondary servants who will collide with each other, each for their own queen, to obtain full possession of the Moon Cell. In addition to the two story modes we will have the possibility to face a character of our choice in free battle mode, here it will be possible to select a stage and face the level normally, then coming to face the enemy chosen as the final boss.
For those who do not know much about the Fate / Extra series, it is possible to consult a convenient encyclopedia by selecting the gallery from the main menu. Here it will also be possible to review the events of the story mode, replay certain tracks of the soundtrack or find out more about the Servants as you unlock them.

Fate / Extella: The Umbral Star can be placed in the category of musou, one of the most hated by the gamer community. Many fans of the series have turned their noses up at Type-Moon's announcement of offering such a different gameplay than the previous one, a typical role-playing game. In The Umbral Star the objective of the various missions will be to conquer the territories from enemy hands by defeating the opposing mobs and attracting the Aggressors who, once eliminated, will allow us to claim that particular sector as ours. To do this we will have various combos available, through the square and triangle buttons, and three powerful attacks: Extella Maneuver, the real name of the Noble Phantasm and the Moon Crux / Moon Drive. The first is a special move that is made when a gauge below the health gauge has at least one charge; using the circle we will be able to unleash a very powerful series of shots, which we can extend based on the number of charges in our possession, concluded by an area attack that will eliminate the weakest enemies. The real name of the Noble Phantasm is one of the most powerful moves that Servants can use and will do enormous damage to enemies in the entire sector. To be able to unleash it we will have to collect three Phantasm Circuits, visible in the map at the top right of the screen, and then press the R2 button. The Moon Crux / Drive is a transformation possible by filling the bar above the health bar by pressing the L2 + X keys. By hitting our enemies and making a large number of combos, the speed with which it will fill up will increase and it will be possible to exploit it even more times during the most difficult battles. The Moon Crux / Drive will allow you to greatly increase the characteristics of the Servant, including health and attack power, but during the transformation time we will not be able to use the Extella Maneuver, making it particularly useful during boss fights that will usually reinforce themselves. making itself nearly immune to normal combos. Another function that will be used to increase the characteristics of your hero is the Command Seal. Through the Options button, it will allow us to increase its health and the charges of the Extella Maneuver for a long period of time. But this is not the only possible use of the Command Seal: if you die without having used it, it will be possible to come back to life up to a maximum of 4 times.

To complete each stage, as we said before, we will have to conquer territories. Each of these will have their own value expressed in keys, and our goal will be to complete the Regime Matrix, an indicator that shows who owns the most territory, and unlock the fight with the Boss Servant on duty. To conquer a territory we will have to fight against the minions until the appearance of the Aggressors, more powerful creatures with more life, by defeating them all we will conquer a number of keys equal to that indicated on the screen and we can move on to the next. During the stage, however, we will also have to be careful of the enemies who will try to fill the Regime Matrix too, if this happens it would mean game over and then start the whole level over.

Before each level it will be possible to accept secondary missions from our allied Servants, these will range from killing a certain number of enemies to reaching a large number of combos. When these missions are completed, the level of affection with that character will increase allowing us to install more upgrades for him when we can use him.

Like the other titles of the Fate / Extella series: The Umbral Star plays a lot on the fan service and on the ambiguity of the characters, during the main quest the relations with the three Queens (although much less with Altera) will be easily misunderstood and, above all to high levels of affection, there will be very erotic scenes without, however, going to the explicit. Compared to many titles of the same genre Fate / Extella disappoints in the graphic aspect. The polygonal models of the Servants are well made but, especially during the internships, you can see how the same care has not been put into the minions that are flat and there is even too exaggerated recycling. To be praised, however, the soundtrack that ranges from the very quiet and relaxing tracks of the menus to the more adrenaline-fueled ones of the stages and bosses. Fate / Extella: The Umbral Star is not localized in our language, the lyrics are only available in English with audio in Japanese.

Verdict 7/10 Black and Altera master waifu Comment Fate / Extella: The Umbral Star is a title that unites the world of musou with the Fate / Extra universe created by Type-Moon. The genre could make fans of the saga turn up their noses but it is, perhaps, the most suitable for describing the situation that arises during the story mode. The possibility of impersonating various Servants is interesting even if the small number, of just 17, suggests the arrival of additional characters through DLC. Unfortunately the graphic aspect is not valued in The Umbral Star compared to the various exponents of the genre, such as Attack on Titan or the various chapters of the One Piece series: Pirate Warriors, but there is congratulations to the developers regarding the music, very beautiful and always suitable for the situation. Pros and cons ✓ Interesting story
✓ Excellent music
✓ Servants made very well x The genre might turn your nose upside down
x Few usable characters
x Graphically, more could have been done
Do you want to be a video game expert and know all the tricks, guides and reviews for your video games ? Holygamerz.com is a group of video game fanatics who want to inform you about the best tricks, guides and tips. We offer you the best information to be a reference in gaming, so here you can find guides, tricks, secrets and tips so you can enjoy your games to the fullest. Are you ready to get all the achievements of that game that you resist so much? Enter now and enjoy your favorite video game to the fullest!
All-Star Fruit Racing review, i.e .: Meh-Rio Kart ❯

Add a comment from Fate / Extella Review: The Umbral Star