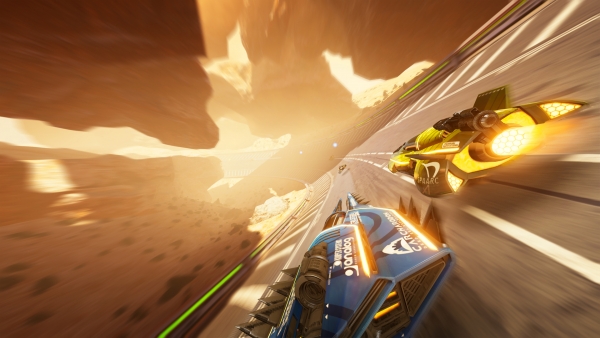 There is a certain category of things that in the 90s were universally considered very cool and which are then, more or less rapidly, slip into oblivion. Like rollerblades, Eurodance music and arcades, futuristic racing games are one of those things. 13 years after the last F-Zero and 5 years after the last Wipeout with each passing day it is increasingly clear that neither Sony nor Nintendo have any intention of resurrecting their historic series of futuristic racers, letting them be independent developers groped to collect the flame of a genre no longer popular as it once was but still followed by an extremely fierce circle of fans. This is the case of the Italians 34BigThings with theirs Redout (also coming to Nintendo Switch in the near future) and the Germans Shin'en Multimedia with FAST RMX, digital title present in the launch line-up of the Nintendo hybrid console. 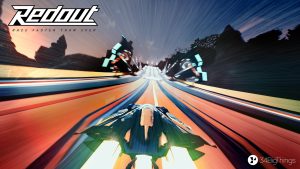 From Wii to Switch in 10 seconds

Shin'en and FAST these are not two new names for fans of the great N. For years the very small German team he dedicates himself almost exclusively to Nintendo platforms, creating digital titles with a particularly refined and refined technical sector, such as those of the FAST series. Born in 2011 on WiiWare with FAST Racing League and then rose to the headlines with FAST Racing NEO su Wii U in 2015, the saga finally lands on Nintendo Switch with a sort of final version of the game two years ago. In fact, FAST RMX proposes the contents of Racing NEO and its Neo Future Pack DLC, updating them both from a graphic point of view and with minor tweaks to the gameplay, as well as with 6 tracks created from scratch. From the point of view of the mechanics little or nothing has changed from the game two years ago: we are always faced with a classic futuristic racer, devoid of weapons and upgrades and based on the use of boosts, acceleration and jump platforms. The main gimmick of FAST is grafted onto this basic structure: at the push of a button our vehicle can alternate between two phases, characterized by orange and blue colors. The footrests of a certain color will only work if we walk them with the vehicle in the phase of the corresponding color, while if we cross them with the wrong color we will be penalized by a sharp braking.. The main mode of the game, the championship one, has been conspicuously reorganized compared to the previous release. The thirty tracks present in the game (16 from Racing NEO, 8 from the Neo Future Pack and 6 unreleased) have been reassembled into 10 cups of increasing difficulty. The competitions are therefore now made up of only three races instead of the four previously seen and can be completed in times ranging from 6 to 8 minutes, particularly suitable for hit and run gaming sessions with Switch in handheld mode. The presence of three speed classes is unchanged, from subsonic to hypersonic through supersonic, while the Hero mode, a pleasant homage to F-Zero in which the boost bar also becomes the energy of the spacecraft's shield, this time is available until immediately, enriching itself with tracks as we complete them in the championship mode.

FAST RMX: a name that is all a program

The gameplay of the game sees some minor tweaks. Shin'en has shown that he knows how to listen to the criticisms addressed to the often excessive difficulty of Racing NEO and made some corrections. The energy globes scattered around the tracks, needed to fill the turbo bar, have slightly larger hitboxes and are easier to collect, while the re-entry time after an accident was lowered by making it It is possible to remedy, within certain limits, any errors. The "rubber band" effect typical of many arcade racing games has also been mitigated: there are many less impossible comebacks by competitors who have passed, while on the other hand it is more difficult to catch someone on the run in the first places. In any case, FAST RMX remains a very demanding game: theOpponent's AI is always extremely aggressive and in many situations these will not hesitate to ram us, sending us into a spin, just as high speeds will require quick reflexes and excellent knowledge of the tracks. Particularly appreciated is the way in which each speed class forces the player to review his approach, leading him to anticipate curves, to help steering with the ZR and ZL backbones, to use turbos in different points of the track, to prefer cars with completely different characteristics. If the speed in FAST is already sustained by the lowest class, at the highest one it becomes literally exaggerated. To triumph in hypersonic mode it will not be possible to ignore the pure and simple memorization of the track and a suitable number of attempts. It is therefore a pity that at launch the game does not provide any mode in which to try the tracks without the action of disturbing the opponents, such as a training mode or a Time Attack (which was also present in Racing NEO!). The latter was not included in the game to allow developers to meet the deadlines for the launch of the Switch, although Shin'en has already stated that will be integrated into the game with a free update coming soon. 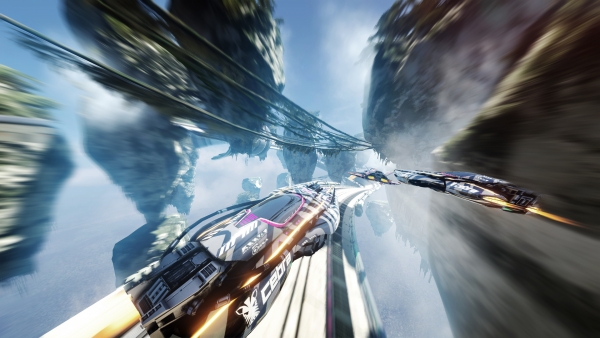 That the Teutonic developers of FAST are programming maniacs and have the mission to squeeze the most of the often underestimated Nintendo platforms is no longer a mystery and RMX further enhances the excellent graphics sector of Racing NEO. The Wii U title employed a number of tricks behind its seemingly impressive on-screen rendering, not least a bizarre 640x720 resolution which was then upscaled to more canonical 1280x720, which resulted in some visual artifacts. FAST RMX abandons this approach and being able to rely on the more performing graphics processor of Switch allows one 720p resolution in portable mode (the physical limit of the Switch display) and 1080p resolution in docked mode, with a 900p dynamic scaling system in the most hectic situations. In both configurations the framerate is nailed to 60 frames per second, even in the 4-player local multiplayer mode, where the Wii U title was forced to concede to the limitations of the console and settle for 30 FPS. The lighting system has also been revised and improved, allowing a more realistic and credible rendering of the tracks and cars. The problem of the absence of anti-aliasing solutions persists, even if, to tell the truth, at the high speeds proposed by the title it is difficult to notice it during gameplay. Net of this small and forgivable flaw, FAST RMX is undoubtedly the most graphically intense title in the Switch launch line-up and is positioned as the technical benchmark that future console games will have to beat. Surprisingly enough for a software house that has often shown that it focuses exclusively on technical implementation, even the artistic sector of the game is pleasant and noteworthy. If that is true some tracks are undoubtedly indebted to the excellent work done at the time by SEGA on the F-Zero GX, FAST RMX succeeds in maintain its identity thanks to precise color choices based on alternating orange and blue and a variety of interesting environments: not only futuristic cities and space stations, but also deserts, canyons, snow-capped peaks, glaciers and rainforests. The electronic soundtrack is of a good level, with pieces with a strong industrial and techno flavor, while once again the cameo of Jack Merluzzi's voice is very pleasant, the now legendary F-Zero GX announcer. 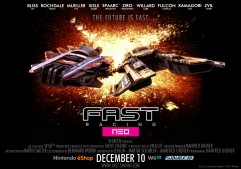 Any self-respecting racing game cannot be said to be such without a multiplayer mode and FAST RMX is no exception. The game offers the ability to play in local multiplayer, both on single console with splitscreen up to 4 players and on multiple Switch consoles in the local network up to 8 players, as well as a 8 player online mode. While locally the title performs very well, with practically the same performances seen in the singleplayer, during the online games we have experienced some sporadic episodes of lag, with the cars of the opponents "teleporting" on the track. As annoying as these incidents are, they are rare enough not to affect the gaming experience, and we positively report the speed of matchmaking. A big negative point is the absence of any way to challenge friends or specific users online. At the current time the online sector of the title allows you to clash only with users chosen randomly and the inclusion of modes related to friends and rivals will only happen starting from a future update. Despite the absence of online multiplayer among friends and singleplayer modes such as Time Attack, FAST RMX is a rather full-bodied game: with 15 cars, 30 different tracks, 10 cups, 3 speed classes and the masochistic Hero mode, it will take several hours of gameplay to complete the title in every aspect, also thanks to an intense and well-balanced level of challenge.

Verdict 8/10 Gotta go FAST Comment That FAST RMX is not the second coming of F-Zero is clear from the first minute. The title of the German team does not have a rigorous driving model like that of the Nintendo masterpiece, nor the charisma of characters like Captain Falcon, but it still manages to defend itself by building its own precise identity. FAST RMX is a fast-paced, challenging and fun game that enhances what has already been done on Wii U from both a graphical and a gameplay point of view. The only doubt that arises is that it was assembled in an excessively hasty way in order to arrive in time for the launch of the console. Modes such as Time Attack and online multiplayer with friends should have been included as early as Day One, rather than forcing players to wait for an update that makes this "definitive edition" truly definitive. In any case we are faced with the umpteenth show of strength of the Shin'en team, which once again demonstrates its ability to squeeze the various Nintendo platforms to the maximum and which this time has managed to complement the excellent technical sector with a gameplay of all respect. The gauntlet is now launched, now we wait to find out how the Switch version of the rival Redout will behave. Pros and cons ✓ It improves the predecessor in every respect
✓ More balanced gameplay and difficulty
✓ Graphically excelled x The aliasing problem was not solved
x Time Attack is missing
x At the moment it is only possible to play online with random opponents
Do you want to be a video game expert and know all the tricks, guides and reviews for your video games ? Holygamerz.com is a group of video game fanatics who want to inform you about the best tricks, guides and tips. We offer you the best information to be a reference in gaming, so here you can find guides, tricks, secrets and tips so you can enjoy your games to the fullest. Are you ready to get all the achievements of that game that you resist so much? Enter now and enjoy your favorite video game to the fullest!
Game of Thrones Ep.2 - The Lost Lords review ❯