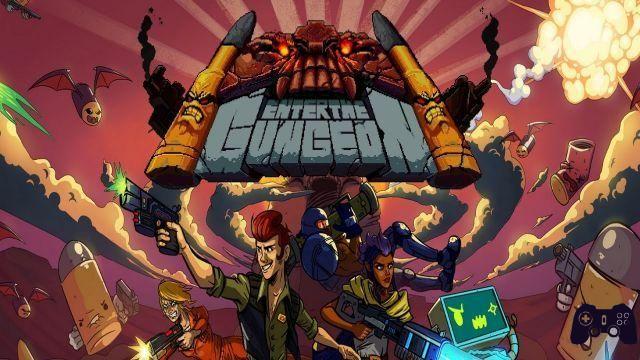 Life is a set of choices.

It is precisely the sum of these choices, regardless of their more or less positive outcome, that defines us, makes us who we are. But sometimes a single choice is enough to change us radically, a single wrong moment in our past to mark our future forever.

But what if I told you that there is a gun that can "kill the past"? Wouldn't you risk everything, even your own life, to be able to fix that mistake?

I would say that the answer is clear from the four figures who are now at the foot of the Gungeon, the legendary sanctuary that contains this legendary gun inside, guarded by hordes of enemies inside its underground labyrinth.

Enter the Gungeon, the boys' first game Dodge Roll Games, is a good conglomeration of different genres that we could come to define as “Roguelike Twin-Stick Bullet Hell”.

The elements are all there: the 5 floors that make up the Gungeon will be generated randomly at each game, as well as the boss at the end of each of them, and the presence of permadeath forces you to start over from the beginning of each game; twin-stick simply indicates that we could move and fire using both analog sticks, while the term "Bullet Hell" this time is not meant solely as a situation where the number of bullets fired is sufficient to cover the floor, rather indicating that the main enemies (and generally the first ones you will encounter) of the game are nothing more than anthropomorphic bullets, which will try to make you skin by taking on various firearms.


To come to your aid, in Enter The Gungeon, there will be 3 important factors: the ability of the various characters to throw themselves forward to dodge bullets and overcome otherwise lethal chasms (exploiting a few frames of invulnerability will often make the difference between life and death), the "blank shots" (which remove all bullets from the screen instantly and for a few seconds, or they can be used to lead to secret areas) and, finally, the last interesting ability common to all the characters is to be able to kick the objects of the various areas to create new covers (for example by overturning a table), or to gain a tactical advantage, as can happen by kicking a barrel of gunpowder to roll it towards a group of enemies.

Four classes for all types of players

"Gungeoneer" is the term that defines anyone who intends to enter the Gungeon, and at our disposal there will be 4 characters from the beginning. The first, perfect for newbies to Enter The Gungeon and of roguelike in general, is the Marine. Its ability to start the game with an additional armor point and its military training (which gives it not only greater accuracy, but also a shorter reload time) make it easily usable by anyone. Treasure-conscious players may prefer the Slayer instead (Hunter), who inflicts greater damage with his crossbow at the beginning of the game, often managing to kill several enemies with a single shot. She will often be helped by her trusty dog, able (sometimes) to dig hidden objects or mark walls to blow up.


A very aggressive choice remains the escaped prisoner (Convict), which, in addition to starting with a practical shotgun, can occasionally throw a Molotov cocktail, and when hit it unleashes a fit of rage capable of increasing the damage inflicted on the enemy. The last character intent on changing his past, as well as the one best suited to experienced players, is the Rider, which compensates for starting with an imprecise gun and little damage with a lockpick with a 50% chance of trying to open the crates without wasting a key, a discount to the shops due to its particular chutzpah and finally, by good space smuggler, with the ability to use two active items and carry 10% more ammo.

How do you explore the Gungeon

Enter the Gungeon immediately reveals a certain repetitive linearity in the things to do, obviously mitigated by the procedurally generated maps: you explore all the rooms of a floor making your way through the enemies, you look for weapons or better objects and you face the boss of the floor, all in hope to survive for the 5 floors that make up the Gungeon.

To offer more variety and give a sense of progression in the game, you can unlock several additional features (including a shop that can spawn new weapons and items, as long as you pay with a currency that only the bosses own), or the more exotic (and potentially suicidal) possibility of starting at a more advanced level. However, despite all the advancements unlocked between games a Enter The Gungeon, it is still possible to find yourself in an advanced level without being able to find a weapon suitable for our style of play: it is precisely for this reason that the developers have inserted safe areas - such as the shop - where it will be possible to buy weapons, ammunition, health and more, or the altars, which, in exchange for a sacrifice of health, money or weapons, can give us some small perks within the game. But be careful not to exploit them too much: some of them can curse you, and, although at the beginning it is difficult to notice changes, as the curse grows you will notice more and more "angry" enemies able to inflict double damage.


Verdict 8/10 The more you shoot, the more you breathe! Comment Enter The Gungeon is a conglomerate of talent, between the beautiful soundtracks, the inspired artwork and the innovative game system, it is easy to assume that the next titles created by this small American team, "Dodge Roll Games", will undoubtedly be to keep an eye on. The devotion they showed me during our meeting at the last GamesCom in Cologne has finally taken shape, in this interesting reinterpretation and fusion of genres, managing to create not only the game they wanted us to play, but that they themselves wanted to play. The result is this little pearl, which while not without flaws, is undoubtedly a great buy for its price. Pros and cons ✓ Great soundtrack
✓ Not just reflexes, but tactics as well
✓ Great variety of weapons x Lack of Online Co-Op
x Unbalanced, fluctuating difficulty
x Insufficient sense of progression

Do you want to be a video game expert and know all the tricks, guides and reviews for your video games ? Holygamerz.com is a group of video game fanatics who want to inform you about the best tricks, guides and tips. We offer you the best information to be a reference in gaming, so here you can find guides, tricks, secrets and tips so you can enjoy your games to the fullest. Are you ready to get all the achievements of that game that you resist so much? Enter now and enjoy your favorite video game to the fullest!
News Darkwood was released on Pirate Bay due to frustration with scammers ❯