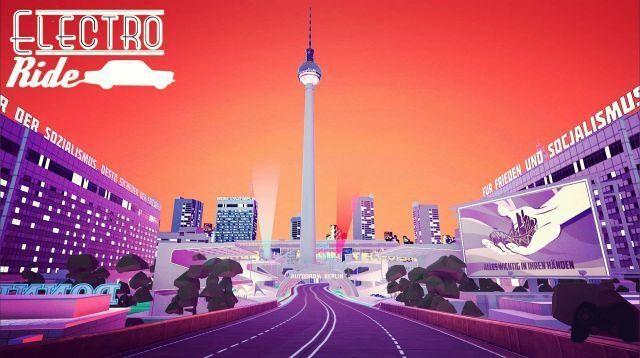 In 2015 the Vaporwave scene around the world, in an attempt to find new forms of expression, abandoned references to Japan to embrace those to Eastern Europe. Hardvapour was born, which had very little luck but which opened the doors to a new imaginary for many of us who grew up on this side of the wall. A resurgence of Svoietic Brutalism, Communist propaganda and Warsaw Pact iconography ensued, flooding the Internet in search of new life.

In 2020 Sylwester Osik released Electro Ride: The Neon Racing on Switch, proving that the former socialist bloc had not yet suffered enough

Electro Ride: The Neon Racing - Gorbačev was just the beginning

The collapse of the Berlin Wall dissolved the Soviet Union forever. For many it was a tragedy that still weighs on the shoulders of those who live in the countries born after the defeat of the USSR. For us, children of NATO raised on bread and consumerism, that culture has become meme material or an object of worship, to be mixed with the subcultures developed in the shadow of the 80s revival of the last five years. Electric Ride: The Neon Racer lays its foundation on exactly that. A socialist utopia, set in a world where the wall is still standing and the streets are not raced on sparkling supercars but on the Trabants and Skodas that have crowded the streets of the cities of the eastern block. 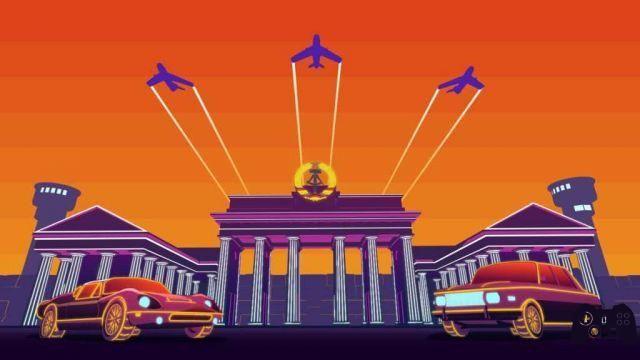 Молчат Дома Don't you know them? Well, you should. It's a bit like New Order was born on the streets of Sofia in Bulgaria.

A wonderful idea, which applied to a simple game would have been enough to make it relevant. Instead Electro Ride is a disaster on all fronts that crumbles in comparison to arcade racer with few pretensions and as much substance as Hotshot Racing. Electro Ride is yet another soulless meatloaf that mixes with eighties influences and neon colors to pursue an identity that, quite simply, does not possess. Socialist icons and threatening architectures were enough, there was no need once again to turn everything in purple and stencerci under the most banal of synthwave rugs.

And to say that in the world there are the records of Молчат Дома and Альянс that exude Soviet decadence in profusion. But do you want to put a lot per kg with the umpteenth jumble of fake synths? 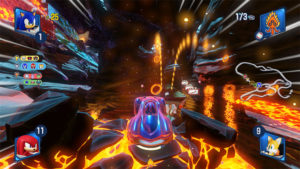 I repeat: the basic idea is great. It was time someone tried to say enough to the usual futuristic racing cars halfway between a Bugatti and a Wipeout airship. It was time for someone to decide to shoot a Tatra 150 all Soviet steel and socialist edges on the streets of East Berlin at 613 km / h. But not like that, because Electro Ride: The Neon Racing is a concentrate of problems and examples of how an arcade racing should not be built that puts everything else in the background. And if on PC at least the glance is at times more than good, on Switch the experience turns into a tragedy.


The little one from Nintendo is certainly not an ideal platform for driving games, but at least as far as indie and arcade titles are concerned, we have seen some great things in recent years. The aforementioned Hotshot Racing is a perfect example of this. Even Sonic finally has a more than decent arcade racing game, come on. In the case of Electro Ride, however, we are talking about a literally disastrous port, capable of lagging right into the game menus and having deadly drops in completely randomized frame rates. Not to mention the atrocious rendering of the seabed, tormented by insufficient resolution and a very narrow field of view.

Ok being arcade, ok being indie, it's also okay to be the first developed title, but Electro Ride is a monument to the most trivial mistakes that can be made in the design of a driving game. The cars are undriveable and offer a hideous feeling. It really feels like driving bars of soap almost completely unable to go straight. The brakes are almost irrelevant, unless you decide to rely on the handbrake, but risk overturning at the slightest pressure of the corresponding button. Each curve must be faced in preparation for an infinite series of adjustments, drifting is practically non-existent, and the management of game physics is embarrassing, much closer to that of a low budget mobile game than to that of an arcade in the strict sense. 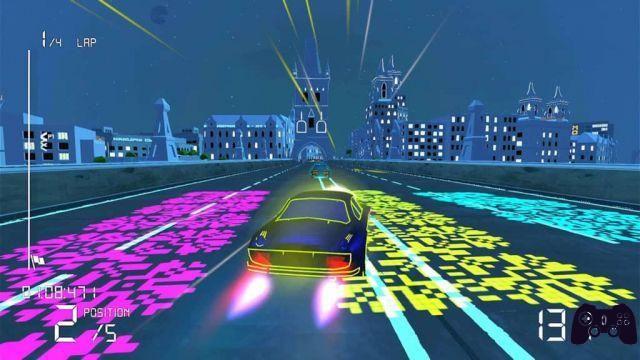 Let's spread a merciful veil on the AI ​​of the opponents and go further. The concept is highly risky: scattered around the tracks are stars which, once collected, change the color of the car. A little further on there are portions of asphalt of three different colors, and passing over the strip of the color corresponding to that of the car you get the instant activation of the turbo. end. There is nothing more. And Sylvester Osyk should explain to me why every circuit is literally flooded with checkpoints that have no gameplay justification.. They don't even mark the split times, you go through them and a very sad audio effect informs us that you have crossed one.

What if Electro Ride: The Neon Racing was intentionally ugly?

I've really thought about it, I swear. And it would have made sense, in view of a game that winks at memes about the backwardness of the former Soviet Union. It would have been decidedly more identity to choose to set Electro Ride as if it were a sarcastic comment on the difficulties of the east side of the Iron Curtain.. As if that socialist utopia of brutalist rose-tinted architecture and monuments to the heroes of the Space Age was halfway between the wet dream of a GDR bureaucrat and the nightmare of an American addicted to prevailing Capitalism. 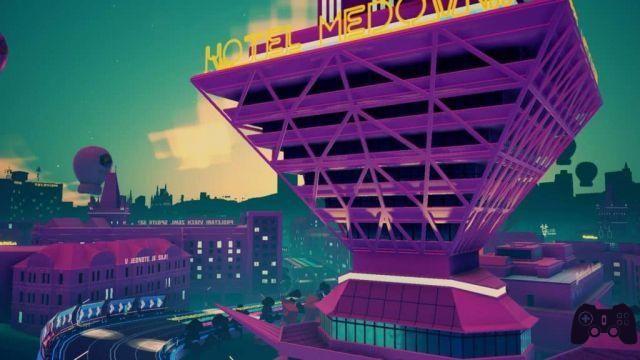 But no, because Electro Ride takes itself too seriously. There is even a very narrow story mode that tries to justify the succession of boring races useful only to unlock new water heaters on wheels with which to continue in the pursuit of cosmic nothingness.

What a great pity, really. Because if it is true that the arcade is dead (spoiler: it is not true) this does not mean that we must necessarily desecrate its tomb. So thank you, but to do an arcade racing just call Yu Suzuki or, if he's busy, you can ask Funselektor for advice., which with Art of Rally has really hit the mark without necessarily having to disturb the monuments to the heroes of socialism. I prefer to keep the Молчат Дома, with all due respect by Sylvester Osyk, who in any case I can not want to hurt.

Verdict 4.5 / 10 Hadn't Gorbachev done enough damage to the Soviet Union already? Electro Ride Comment: The Neon Racing is an almost incommentable disaster, sunk by a disastrous technical sector and almost non-existent gameplay. It's a great shame, because the idea of ​​crashing through the streets of Warsaw at unreal speeds aboard a Lada Samara tickled my heart as a veteran Communist. But no, even this dream was denied me exactly like that of a new socialist revolution. Patience, by now I have made the callus. It would be appropriate to stop torturing the corpse of the arcade if you do not have at least enough game design ideas. And no, Electro Ride: The Neon Racing has virtually none of ideas. But there is the Fiat 126p, and I can't really want Sylvester Osyk really bad. Pros and cons ✓ The Trabant P50
✓ The Skoda Favorit
✓ Brutalism x Embarrassing gameplay
x Technically incommentable
x Poor sound sector
Do you want to be a video game expert and know all the tricks, guides and reviews for your video games ? Holygamerz.com is a group of video game fanatics who want to inform you about the best tricks, guides and tips. We offer you the best information to be a reference in gaming, so here you can find guides, tricks, secrets and tips so you can enjoy your games to the fullest. Are you ready to get all the achievements of that game that you resist so much? Enter now and enjoy your favorite video game to the fullest!
Guides Where to find the Book of Knowledge - Assassin's Creed: Valhalla ❯

Add a comment from Electro Ride Review: The Neon Racing on Switch is one of the worst things that happened in Eastern Europe - Review