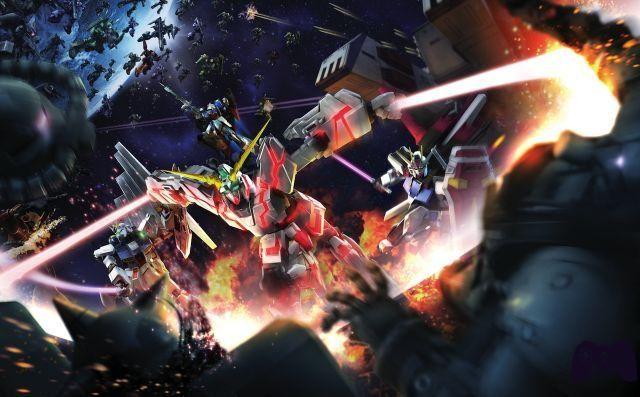 When Koei ed ω-force (Omega Force) showed up at the Playstation launch with their first musou, Dynasty Warriors 2 (the first of the series, for Playstation, was a 2D fighting game) invented a real sub-genre among action games. With the countless chapters of the main brand, the series has over the years attracted many fans, happy to mow waves of enemies with a rather questionable AI and also many perplexities from those who see each iteration equal to itself or in general with little bite. To recover or attract a part of users in recent years Tecmo Koei has added new licensed IPs to the Dynasty and Samurai series. Together with the two musou chapters of One Piece and Ken the warrior, ω-force has come to develop the fourth iteration dedicated to Gundam. The genre dedicated to the famous Mobile Suits adds a chapter full of novelties and characters (with related humanoid vehicles).

NO ONE SURVIVES A GUNDAM

With the first Dynasty Warriors: Gundam, ω-force had opted for a new universe that would serve to combine the various characters inserted and orient them towards a common goal. In the second chapter, however, the story mode unfolded following some of the main animated series allowing the player to experience what (in the opinion of the development team) were the main battles. Subsequently, in the third iteration of the brand, the story mode returned to that universe created "ad hoc" that had little conviction due to the same Story missions for each character (with an identical ending for all) and for the few narrow maps.
Finally (and definitely?) In Dynasty Warriors: Gundam Reborn a Story mode is back (called OFFICIAL MODE) which follows, in broad terms, the events of some animated series of the famous robots. In fact, it will be possible to retrace 6 main stories (with as many battles for each series) namely: Mobile Suit Gundam, Mobile Suit Z Gundam, Mobile Suit Gundam: Char's counterattack, Mobile Suit Gundam Unicorn which, as fans know, are placed in the same timeline (Universal Century), in addition to Mobile Suit Gundam SEED and Mobile Suit Gundam SEED Destiny (both from the Cosmic Era). The events are told in broad terms and allow you to get a rough idea of ​​what is happening thanks also to a narrator who between one battle and another tells us about global events, they involve a federation and / or more characters. In the case of relevant events, the narration will focus on it with phases in a visual novel style.
In addition to the main mode, there is the ULTIMATE MODE. Composed of small sub-plots in which it is possible to use any character and in which characters from different universes will meet. Without referring to an "ad hoc" situation we will go through short operations, some of which are inspired by series parts not included in the main mode. Just think of the help we are going to give to Judau in garbage collection or participation in the Gundam Fight.
Compared to the second chapter, which is also structured in Story mode and Secondary mode, it is necessary to note the absence of the personal stories of the individual pilots outside the television series examined. Although limited by assets, in Dynasty Warriors: Gundam 2 it was possible to retrace the individual stories and direct relationships between some characters, this opportunity unfortunately is not present in the Ultimate Mode of Dynasty Warriors: Gundam Reborn.

TEN, HUNDRED, THOUSAND… BUT THE MASSACRE

The gameplay of Dynasty Warriors: Gundam Reborn it takes up the classic musou genre by adding some particular novelties and removing, in some respects, tedious features of the previous chapters. Too bad for the removal of tactical elements (such as the catapults of the third chapter) which represented fun variations.
Obviously what is expected of a musou are waves of minor enemies who are nothing but meat for slaughter (or in this case, scrap metal). By piloting our Mobile Suit we will make our way through enemy-controlled territories by conquering them (and sometimes protecting those we own). Among the objectives available to advance on the battlefield, the player must: eliminate enemy pilots, save and / or escort allies (interesting the possibility, in critical situations, to restore part of the armor of the allies in critical conditions by approaching them), take down enemy battleships and mobile armor (in this chapter even piloted by the player); in some cases it will also be necessary to pay attention to a reduced time limit on pain of defeat. In addition, in ULTIMATE mode there will be several global objectives that can cost us the entire operation.

Basic attacks differ between normal (Square button) and charged (Triangle button). It is possible to chain them in series using different combinations. The click (Cross button) has several uses: offensive, defensive and movement (even to make a transformation into an aircraft with some Mobile Suits).
The biggest changes concern the management of the special attack system (SP): a “loaded” SP attack has been added: this can only be performed with a character higher than level 30 and with two SP bars available. Executable only on the ground, this new attack is, in terms of power and animation, similar to those that in the past chapters were performed in combination with an ally, with the need (now removed) therefore to find one with which to carry it out.
In addition to this, the inclusion (already partially seen in Dynasty Warriors 8 and Xtreme Legends) of an additional bar called "BURST“, Allows you to unleash the true power of the Mobile Suit and the related pilot, with some bonuses attached: from the increased attack speed, to the slowdown of enemy attacks and others.

Speaking of the development system, the big news concerns the characters. In fact, it will be necessary to accumulate Team Points that will be given to the character we will use, to his selected partner and up to 4 favorite drivers chosen by the player. These points allow you to purchase and / or upgrade the skills that we will assign to the character, up to a maximum of 6. The development of Mobile Suits takes place through components (as in the past) to be combined with each other for better results (with a limited maximum number of combinations). It will also be possible to develop individual equipment, such as the sword or the rifle on duty using materials found on the battlefield.
With an internal achievement system, managed in the form of collectible cards, it will be possible to unlock pilots, partners, Mobile Suits and obtain monetary rewards or in the form of materials, satisfying more or less variable requirements.

CEL SHADING WHERE ARE YOU?

The first thing that catches your eye when playing Dynasty Warriors: Gundam Reborn for a player who has already had the opportunity to approach the third chapter, it is the total absence of the magnificent Cel Shading used in the previous chapter. With this technique, the Mobile Suit models had been made brilliant and stood out on the backdrops. Characteristics lost with the abandonment and that has brought (or rather, brought back) everything to the level of flatness of its predecessors.The soundtrack of the game presents itself with accompanying songs to the battles that are the background without ever exalting the 'atmosphere. The dubbing, exclusively in Japanese, is successful, but the lack of at least the audio in English forces most to keep the intrusive subtitles activated.

In the Ultimate Mode there is also the cooperative mode: in fact, by launching an SOS signal on an operation, it is possible to get help from players from all over the world, just as it is possible to participate in a cooperative operation if someone has sent you the same signal. The problem with this matchmaking system is guessing which mission has an active signal and a global search is not allowed, which makes it particularly difficult to find an adventure companion. Too bad for the absence, even in this chapter, of competitive multiplayer.

Verdict 8/10 Robots and blows in industrial quantities. Comment Dynasty Warriors: Gundam Reborn takes many steps forward and introduces novelties (even with respect to the entire genre). The variations to the gameplay and the modes inserted grant greater simplicity of access (which should not be confused with an intrinsic simplicity of the game) making some mechanics that in the past did not even completely depend on the player more immediate. In addition to this, the new Ultimate Mode convinces in broad terms and the inclusion of global objectives in some operations forces the player to calculate the approach in detail. The abandonment of Cel Shading unfortunately deprives graphically of that brilliance seen in the third chapter. Ultimately though, if you are a Gundam fan and have never approached a Musou this is the right opportunity to try; if on the other hand you are a fan of Musou and you want to get a rough idea on the themes of a brand like that of Gundam that turns 35 this year, Dynasty Warriors: Gundam Reborn is an excellent opportunity. Pros and cons ✓ Wide choice of characters
✓ Six animated series in Story mode
✓ Lots of news for the genre
✓ Game structure made faster and more immediate x Cel shading removal
x Some important shortcomings in the roster
x No relevant tactical elements in the fields to be conquered
x The personal stories of the pilots are missing
Do you want to be a video game expert and know all the tricks, guides and reviews for your video games ? Holygamerz.com is a group of video game fanatics who want to inform you about the best tricks, guides and tips. We offer you the best information to be a reference in gaming, so here you can find guides, tricks, secrets and tips so you can enjoy your games to the fullest. Are you ready to get all the achievements of that game that you resist so much? Enter now and enjoy your favorite video game to the fullest!
Special Wonder Woman - Wonder Movie? ❯