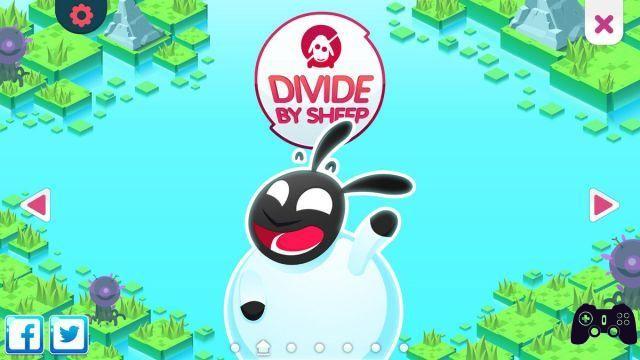 One of the most suitable genres to be played on smartphones and tablets is undoubtedly that of puzzles, especially those in which logic is the master. But what happens if we add a little mathematics, a few sheep and a certain amount of gratuitous violence to this approach? The answer comes from tinyBuild (which you may already know for No Time To Explain or Boid).

Reap the flock for me

The quality / price ratio is more than spot on

At the base of the game is the "diabolical" plan of Death himself who, being able to make friends only with the dead, decides to submerge everything in an attempt to drown as many sheep as possible. The player's aim will be to guide the survivors, trapped on islands with a surface limited to the millimeter, on the lifeboats.

Everything is divided into 120 levels (divided into 4 worlds) of puzzles of increasing difficulty: the first games act as tutorials and have the aim of making the player understand the mechanics, but as you proceed they increase in step with the challenge. also sadism and the tools to use to save / decimate the sheep. Considering the price of € 2,99 (without other in-app purchases), the offer is definitely spot on in terms of quantity.

Divide by Sheep is at risk of addiction, as only the great classics of the platform can be

The purpose, as mentioned, is to guide the sheep safely on the lifeboats, making them pass on the remaining islands. The trouble is that the places on the lifeboat are limited (which applies, as mentioned, also to the islands) and therefore it is necessary to embark the exact number of beasts indicated by the game to earn each of the three stars up for grabs in each level. By force of circumstances it will therefore be necessary to give a thinning out to the flock: in the first levels to do this, the limited size of the islands will be exploited, forcing some sheep to drown by moving the flock to an island unable to host it in its entirety or already occupied by other animals, but proceeding with the experience of the tree of the possibilities will become more varied including among other things laser grids able to "dissect" the sheep in order to allow them to occupy double the space (once on the lifeboat these will be stitched up and will come back almost like new), platforms that make them bounce half in a different direction and obviously their natural predators, wolves that once eaten a sheep will remain motionless in place to digest the meal satisfied. These are basically challenges in which it is necessary to resort to logic and a minimum of mathematics (nothing complicated, the minimum requirement is to know the subtractions), which thanks to the aforementioned increasing difficulty curve and the "caricature violence" of the title manage to catch the player, easily victim of the classic "one game and then I quit". In short, to put it in terms that those who hang out a bit on these platforms know Divide by Sheep is one of those mobile hits that can easily be combined with titles like Cut the Rope and World of Goo.

Also from a technical point of view, thanks to the absence of problems whatsoever and to a colorful and cartoon visual style (really aligned with what is the tone of the product), Divide by Sheep has all the credentials to entertain those who play for a good portion of time. The sound also behaves properly, doing its job without any particular problem. The offer closes with the now obligatory support to the Game Center rankings, which also gives something to scoring fans.


Verdict 9/10 How was that story that nothing ever comes out on mobile? Comment Divide by Sheep is already in practice a classic as regards logic-based puzzle games and (a hint) of mathematics: tinyBuild has hit the mark and has created a guessed product both in terms of playful and "commercial" formulas ", thanks to a truly enviable price / content ratio. If you have a device that runs iOS at hand, trying it is a must; in the meantime, the hope is that the developers will continue in the wake of other titles of the genre by packing expansions (even for a fee) to further enrich the whole Pros and Cons ✓ Addiction risk
✓ Lots of content
✓ price spot on x We want expansions!

Do you want to be a video game expert and know all the tricks, guides and reviews for your video games ? Holygamerz.com is a group of video game fanatics who want to inform you about the best tricks, guides and tips. We offer you the best information to be a reference in gaming, so here you can find guides, tricks, secrets and tips so you can enjoy your games to the fullest. Are you ready to get all the achievements of that game that you resist so much? Enter now and enjoy your favorite video game to the fullest!
Hyperdimension Neptunia Re Review; Birth2: Sisters Generation (PC) ❯