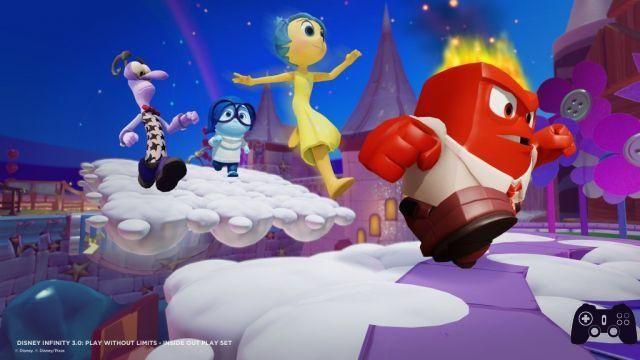 Since the first appearance on the shelves, each version of Disney Infinity has been accompanied by additional Play Sets, which went to increase the adventures of specific figurines and to further extend the longevity of the title of. Avalanche Software. Version 2.0 following in the footsteps of its predecessor, I bring the little players to the Manhattan of Spider-Man and to the planet Knowhere, in the company of the Guardians of the Galaxy. Disney Infinity 3.0 is not far behind, and last August 27th, at the same time as the Starter Pack containing the Star Wars set "The Twilight of the Republic", The Play Set dedicated to the next Pixar film to be released in theaters on September 16th has also arrived on the shelves, Inside Out. Inside the Play Set, sold at a recommended price of € 34,99, we find the game world and the figurines of Enjoyment e Anger, while the other three emotions (Sadness, Fear and Disgust) are sold separately for € 14,99 each.

For anyone who has lived dispersed in the mountains until today and does not know what you are talking about Inside Out, it is necessary to introduce at least broadly the plot of the film, since the Play Set is set after the events narrated there. The story of Inside Out takes place inside the mind of Riley, an 11-year-old girl who moved to a new city with her family. The five main emotions each have their own role in the girl's life, all except Sadness, who feels a little out of place. With the help of Gioia, she will embark on a journey that will take them into the depths of Riley's mind, discovering her own destiny in what is surely among the best animated films of the year. The Play Set of Disney Infinity 3.0 Set sometime after the events of the film, Riley is watching a documentary about kittens when she falls asleep and drops the remote, switching to a channel that plays a horror movie moments before falling asleep. When the girl falls asleep, the emotions panic, because the monsters of the swamp could cause nightmares to their mistress. Gioia decides to take matters into her own hands and leaves together with Anger, Disgust, Fear and Sadness in search of the source that is generating the terrible monsters. 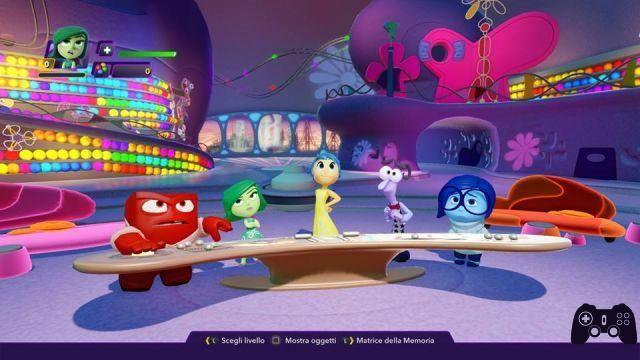 Unlike the other Play Sets released in the past three years, Inside Out does not feature an open world mode consisting of main storyline and subquest, but proposes a series of twenty-nine platforming levels both in 2D side scrolling and in 3D. Thanks to the collaboration with Sumo Digital (Little Big Planet 3), the new nature of the Play Set works and convinces in telling the journey of the five emotions through the different settings of the game. Between giant pizzas, musical notes and time blocks, the emotion chosen by the player (depending on the miniature owned) will have to reach the end of the level by collecting the pages of the mind's diary, bursting all balloons, and in the shortest possible time. stands on a well-balanced difficulty, with the presence of Bulb-ideas, the last collectible and bound to a fundamental rule, once collected it will be necessary to reach the end of the level without dying. At the end of each zone, the player's performance will be evaluated according to the criteria just mentioned, and he will receive up to a maximum of three stars. Completing all levels with each star will increase the replayability of the Play Set, whose initial duration is around 6 hours (as per tradition).

The Play Set of Inside Out offers different dynamics in which to test the five protagonists, as already mentioned, the levels are mainly divided into two categories: the two-dimensional side scrolling ones, and the slightly more exploratory ones with three-dimensional framing (Super Mario 3D World style to be clear) but they contain (in addition to collectibles) many ideas cute and successful to make even the little ones passionate about the platform genre. Between musical levels in which emotions will have to turn certain switches on and off to place colored moving blocks with the right timing and arrive safe and sound at the end of the 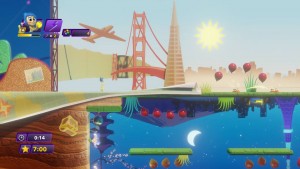 inflated area and bats to use as spheres to run and slide on huge skate-board tracks; and again clouds that disappear on contact, zombie broccoli that run crazy, timed electric traps, trampolines and huge lava lakes, the mechanics we want to focus on envelops the entire second half of the Player Set: portals that overturn the game frame , leading the emotions to run upside down towards their finish line. The gravity shift can challenge even the biggest players, especially once you get the Bulb-idea level, forcing them to calibrate each move as accurately as possible. To increase the pepper of the double gravity levels, environmental puzzles that in addition to the switches already mentioned will exploit the positioning of the workers of the imagination. The five emotions to unlock certain steps to continue in the levels, will have to recover Riley's lost memories: nothing transcendental and too hidden, but key elements in solving environmental puzzles that they will face during their crossing in the crazy lands of Imagilandia, the workers above, will be brought to the required positions in order to activate transporters or cloud generators. 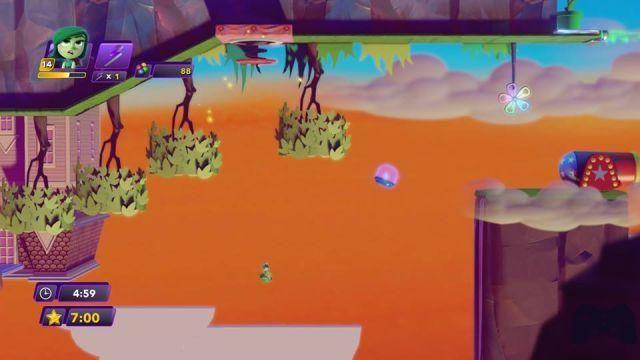 The emotion that represents you

It is therefore time to talk about the five protagonists, each with a particular ability once positioned on the portal of Disney Infinity. Enjoyment can glide after a double jump by holding X, thus reaching more distant platforms; Anger he is the only character who will not die instantly by touching the lava, omnipresent in the game levels, but he is also the heaviest character and will cause an almost immediate dissolution of the clouds; in reverse Sadness he is the only character able to remain on the cumulonimbus clouds without making them disappear, in order to make the levels dedicated to the cottony white masses a walk; Disgust it will jump higher every time it touches a cloud, reaching heights unattainable by others; finally Fear is the fastest of the group, and is ideal for completing levels in the shortest time. In each of the twenty-nine levels there is at least one section that is easier with a certain emotion, but unlike what we saw in Skylanders, in which certain sections are closed unless you have the right miniature, a costume designer has been included in the Play Set of Inside Out, who will give your hero the appearance and skills of the other characters for a short time. Obviously having all five figurines available makes it much easier and allows two players to work together to get to the finish faster and with more balloons. 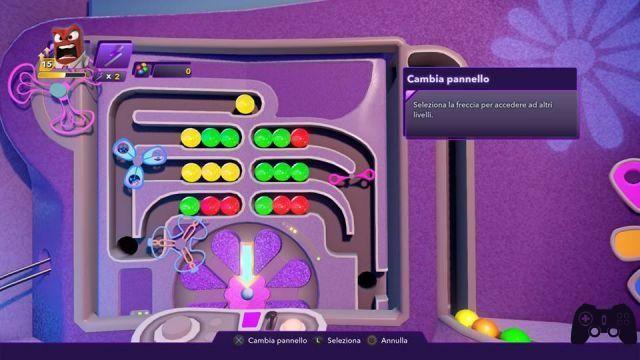 The best of our best

As with the Starter Pack, the Inside Out Play Set also offers a high quality dubbing, with the Spanish voices of the film and above all with the fabulous music of Michael Giacchino. Disney Infinity's Character Design also fits perfectly with the latest Pixar film, delivering well-defined polygonal patterns both on screen and in physical counterparts. The only problem encountered on a technical level occurs during the minigame of the Memory Matrix (an internal bejeweled that will unlock levels in sets of three) with occasional frame drops each time you fire a chain of balls. Nothing transcendental and that does not affect the platform experience of the Play Set in the least.

Verdict Yes Where will it ever be? Imagilandia? The dump of memories? Detroit? Comment With Inside Out, Avalanche Software and Sumo Digital manage to renew the idea of ​​Play Sets cemented in the Open World mechanics of the past two editions. With its twenty-nine levels full of interesting mechanics, we are sure that those who buy it will not be disappointed, especially if they have enjoyed the Pixar movie. We hope that future Play Sets based on Disney movies will turn out to be as successful as this one as well. Pros and cons ✓ High-level dubbing
✓ Interesting and well implemented mechanics
✓ Successful level design x Occasional frame drops
Do you want to be a video game expert and know all the tricks, guides and reviews for your video games ? Holygamerz.com is a group of video game fanatics who want to inform you about the best tricks, guides and tips. We offer you the best information to be a reference in gaming, so here you can find guides, tricks, secrets and tips so you can enjoy your games to the fullest. Are you ready to get all the achievements of that game that you resist so much? Enter now and enjoy your favorite video game to the fullest!
News Dragon Ball Xenoverse 2, the lite version is coming ❯

Keep Talking and Nobody Explodes Review

Add a comment from Disney Infinity 3.0 Review - Inside Out Play Set