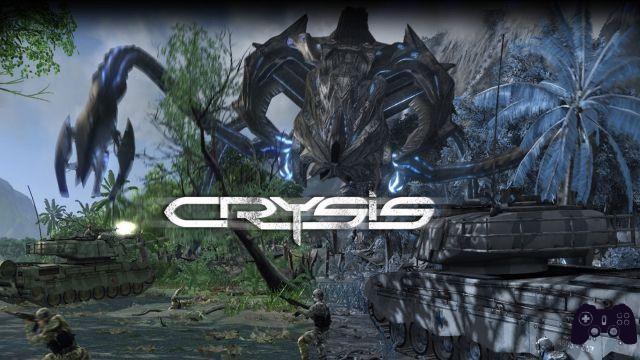 The story of Crysis takes place in the near future, precisely in August 2020. The protagonist is Jake "Nomad" Dunn, a Delta Force soldier called to investigate, with his team called Raptor Squad, on the disappearance of a group of archaeologists kidnapped by the army Korean. But as soon as we arrive on the island we will discover that the island hides, inside its mountain, a secret that will endanger the entire planet!

I think I've seen it before ... But isn't it missing something?

Crysis was already released 4 years ago exclusively on PC but, just a short time ago, Crytek had the good idea of ​​making it come out also on consoles. Even though it's been 4 years since its release, Crysis still remains the great game it once was; Crytek, when he announced the console versions, said the console versions would be even superior to the PC version but, apparently, that doesn't seem to be the case. Or at least on PlayStation 3 (the version tested in the review phase).
For heaven's sake, the PlayStation 3 version of Crysis is quite good from a technical point of view and maintains the same freedom of play as the original PC version, but you can see a lot (even at a quick glance) how the native resolution has been lowered a lot. Furthermore, the multiplayer sector, the Sandbox editor and a campaign level are totally missing. In addition, the console is plagued by various bugs and some, unfortunately, can give serious problems to the playability of the title. For example, I happened to repeat the final level 3 times because a rather annoying bug prevented me from enjoying the ending of the plot and took me straight to the credits ...
The Artificial Intelligence of the enemies is discreet: many times they will try to make you the skin with all the weapons they have at their disposal, but other times they will remain impaled and look at you like idiots, while you will take them out without any problem. This was a problem already present in the PC version and, apparently, nothing has been done to improve the artificial intelligence of the enemies: this is a symptom that Crytek has simply done a very fast port of the game, limiting himself to optimizing the title as long as it runs. well on consoles.
As on PC, only in Very Hard mode will enemies be able to put you to the test. Then, when the plot takes a decisive turn, you will no longer face the "stupid humans" but a different enemy who (we don't go into it so as not to give spoilers to those who haven't played the first Crysis) will instead do everything to eliminate you, raising a lot long the level of challenge.
The longevity of the campaign is slightly lower than the PC version, since the Crytek guys had the good idea of ​​canceling a flight mission that instead, among other things, diversified the gameplay and lengthened the duration of the campaign by a little. in single.

Despite the past years, Crysis gameplay is still very good and fun; thanks to its open structure and powers, there will be no limit to your thirst for destruction! As before, Crysis gives the opportunity to use various weapons to be able to defeat our enemies and, going forward in the game, there will be unconventional weapons (with the times in which Crysis is set, of course).
The game, as history teaches us, offers the player the possibility of being able to complete the missions as they see fit. It is always necessary to start from point A to go to point B, but we can carry out the mission in any way and following any path. Thanks to invisibility, for example, we can do most of the missions in stealth mode without being detected, or throw ourselves into battle and destroy enemies with the use of the powers of the Nanosuit.
About the fabulous Nanosuit! For those who do not know yet, our protagonist will wear a special suit that will allow him, for example, to activate an armor that will allow him to resist for a limited time the blows of enemy weapons, or he can - as already said - make himself invisible for silently kill enemies; he can also run faster to cover great distances in less time or even use his super strength to destroy enemies with a power punch. And for those who are not satisfied, the Nanosuit will allow the protagonist's life to be regenerated (subterfuge to motivate what, a few years later, would become the abused self-regenerative life system that EVERY shooter has today).
All of this takes a lot of energy, which is why there are two energy bars on the GUI. The green one indicates the life points and, every time the enemies hit us, this will tend to recharge completely after a few seconds. Instead the blue bar is dedicated to the use of powers and will recharge as soon as we stop using a power.

… Even if I preferred it before.

As mentioned at the beginning of the review, the missing mission is not the only reason why the longevity of Crysis is reduced on consoles. Of course, the campaign is quite replayable because it allows you to try new things and never in the same way, but you feel the fact that Crysis on console is in a certain sense "castrated" or rather, in addition to the removed level they are missing (right on the level of gameplay) some quibbles that made life on PC much more challenging. Put simply, Crysis for consoles appears simpler than that for PC, pad in hand (may we all be savvy by now?).
And at the expense of longevity, the multiplayer sector - despite not having convinced on PC - should not be removed. Indeed, all the more reason this would have been the ideal opportunity to improve it or at least adapt it to the radical new features of Crysis 2 online. And, once again: Where is the sandbox editor?
But the real question is: was this port released for mere fan-service?


Verdict 6.5 / 10 Take it for PC Comment Crysis returns, after 4 years, to PlayStation 3 and Xbox 360 but it does it in the worst ways. Crytek could save himself from labeling this version as "the best", considering all the shortcomings (an entire level of the campaign, the editor and multiplayer). Frankly, I don't feel like recommending the purchase of this console version, especially thinking back to the fact that today for a price even lower than that set on LIVE and PSN (€ 19,90) it is possible to replay the very bad PC version. Technically, Crysis remains a high-level game, but not on consoles. Pros and cons ✓ The Nanosuit remains fabulous!
✓ Absolute freedom like on PC
✓ Interesting and fun campaign ... x Artificial intelligence still lacking
x Too many unresolved bugs from the past and new problems
x ... even if disabled
x Serious shortcomings including multiplayer and editor
x The graphics have not been optimized properly
x A hastily ported

Do you want to be a video game expert and know all the tricks, guides and reviews for your video games ? Holygamerz.com is a group of video game fanatics who want to inform you about the best tricks, guides and tips. We offer you the best information to be a reference in gaming, so here you can find guides, tricks, secrets and tips so you can enjoy your games to the fullest. Are you ready to get all the achievements of that game that you resist so much? Enter now and enjoy your favorite video game to the fullest!
News Star Wars: Jedi Challenges arrives with Lenovo Mirage ❯