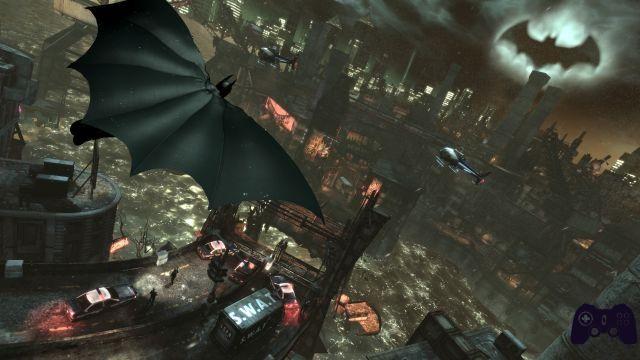 Batman has always been one of the most loved superheroes by comic readers around the world and this success is not only due to the charisma of the character and his being "man among the gods", but also to ability of authors of any media to be able to enhance their skills with respectable works. The Tim Burton movies, the recent incarnation of Nolan, the Bruce Timm TV series and the LEGO Batman series are just some of the quality products born from the character invented by Bob Kane and Bill Finger. The boys of Rocksteady Studios, which we have come to love over the past generation of consoles, are the authors of the best videogame incarnation of the Bat Man, managing to enter the Olympus of those who have perfectly understood the spirit of the DC Comics character. Just the first two chapters of the series dedicated to Batman (Batman: Arkham Asylum and Batman: Arkham City) have now been re-proposed for the current generation consoles, strong of all additional content released over time and a graphic update to keep up with the times as much as possible. Will the British team be able to create an essential collection both for those who have already played the chapters in question and for newcomers to the series? As usual, before leaving the answer a few lines below, we remind you that Batman: Return to Arkham (this is the name of the remastered) is available from 21 October at the introductory price of around 50 euros (49.90 €) For PlayStation 4 e Xbox One.

Guess, riddle. Who's afraid of the beautiful bat ?!

As fascinating as it is, Batman: Arkham Asylum fails to reach the narrative heights of its successor

As anticipated in the opening paragraph, in Batman: Return to Arkham we will relive the adventures of Batman: Arkham Asylum and Batman: Arkham City, released respectively in 2009 and 2011 for the last generation of consoles. In the first of the two titles dedicated to the Bat we will see Batman getting trapped inside Arkham Asylum (the asylum where the worst criminals in the city of Gotham are left to rot) to stop a revolt unleashed by the Joker. The location decided by the guys at Rocksteady Studios lends itself perfectly to gothic atmospheres of the character of the Distinct Competition, but stuffs everything with a character design leaning more towards the horror genre and, just to keep to this style, introduces the most monstrous Batman antagonists (e.g. Scarecrow, Killer Croc, Bane). Strong of a simple plot, but at the same time extremely fascinating (written by the screenwriter Paul dini), Batman: Arkham Asylum fails to reach the narrative heights of its successor. In Batman: Arkham CityIn fact, you sacrifice a few points as regards the atmosphere, but to stage a plot full of twists that we are sure will satisfy not only comic fans, but also all those who are “simply” looking for a well-told story. Furthermore, starting from this chapter, it is quite clear how the events set within this series are completely disconnected from those of the comics, taking its own direction and becoming, in all respects, an alternative universe. In Batman: Arkham City, we will also make the acquaintance of new characters from the world of the Dark Knight and, although they are not always among the most famous, we must admit that every single one of them is properly characterized and manages to leave a mark both on our videogame Bruce Wayne and on the real player. In fact, we are not going out of balance if we say that the Arkham series is the best product related to the Batman universe to be released in many years, surpassing both the latest films of the character and the actual comics in quality and fidelity. A real shame, however, is the lack of Batman: Arkham Origins which, despite not being developed by Rocksteady, was able to add fundamental elements for the characterization of Batman and some of his antagonists (first of all the Joker, thanks also to sequences taken from the immortal graphic novel The Killing Joke).

As regards the gameplay, the Arkham series entered the history of the gaming industry for introducing the concept of Free Flow Combat, or the fighting style of Batman then used for dozens of other titles (Remember Me and Shadow of Mordor are just two of them). Through this type of game, circling through enemies has never been easier, allowing us to alternate attacks, dodges, counterattacks, finishing moves and the use of objects with disarming simplicity. But you don't live on fistfights alone in Batman: Return to Arkham; they are present, in fact, too stealth sections where we will be forced to knock out a series of enemies trying not to be seen by them to avoid being hit by a barrage of shots (remember that Batman is strong, but not immortal). These sections are already present in Batman: Arkham Asylum, but they manage to give their best only in Batman: Arkham City thanks to a more refined level design and more open areas which allow the player to act with greater freedom. Precisely this second chapter, given the city setting and no longer closed as in the asylum, introduces a openworld which, although not particularly large, allows you to get lost in the search for side missions and puzzles to solve. The aforementioned puzzles, in fact, are one of the fundamental elements of the Rocksteady series and force us to solve environmental puzzles to obtain certain objects in order to trace the position of theRiddler and defeat him once and for all. While being an ancillary part of the plot (which many of you will probably tackle once the main adventure is over), puzzles are well thought out, fun and capable of considerably increasing the total number of hours you will spend as the Bat. Additionally, in the Batman: Return to Arkham collection all the additional challenges are present (some arenas where we will have to defeat certain enemies with certain modifiers to get the best score) and content dedicated to Batman's helpers (and others). Nothing that was worth the money they cost when they came out at the time, but which they definitely prove an added value in this new edition, complete in all respects.

As in any self-respecting remastered, now is the time to deal with the technical side of production. From a graphic point of view we must admit that the transition from Unreal Engine 3 to Unreal Engine 4 is noticeable in all respects, presenting some improved titles both as regards the polygonal modeling of the characters and for the use of lights and shadows completely revised and able to still leave you speechless. If Batman: Arkham Asylum still demonstrates some technical problems, the same cannot be said for Batman: Arkham City which, with this new update, really manages to amaze and demonstrate a good general glance. The sound sector is also impeccable which, despite the lack of the possibility to switch to the original dubbing (with a Mark Hamill in the role of the mind-boggling Joker), presents the dubbing faithful to the 90's animated series and a soundtrack full of wonderful tracks that you will surely not easily forget. As for the technical problems we must admit that we did not understand the motivation of the some frame drops in Batman: Arkham Asylum, also present in some not very chaotic moments. Nothing particularly annoying, mind you, but once again Batman: Arkham City proves to be optimized in a better way than its predecessor.

Verdict 8/10 Nolan should take lessons from Rocksteady Comment Batman: Return to Arkham is a simply must-see collection for those who haven't had the chance to get their hands on Rocksteady's work yet. If you are among the people just mentioned, increase the final grade by one point without problems, as you are about to approach two extremely valid titles not only in terms of the plot, but also for a gameplay that, at the moment, many still try to imitate. For all those who have already had the pleasure of accompanying the Bat in his adventures we must make a clarification: it is true that Batman: Arkham Origins is missing and that there are some technical flaws, but this collection proves to be an excellent (and complete ) update of two awesome titles that we are sure you will want to play and replay again in the future. The final choice, however, is up to you. Pros and cons ✓ Two unmissable titles
✓ Top storyline and atmosphere for the character
✓ Solid and multifaceted gameplay
✓ Many things to do
✓ Great remastering work x Batman: Arkham Origins is missing
x Some technical problems
Do you want to be a video game expert and know all the tricks, guides and reviews for your video games ? Holygamerz.com is a group of video game fanatics who want to inform you about the best tricks, guides and tips. We offer you the best information to be a reference in gaming, so here you can find guides, tricks, secrets and tips so you can enjoy your games to the fullest. Are you ready to get all the achievements of that game that you resist so much? Enter now and enjoy your favorite video game to the fullest!
Guides Where to find all the Mysteries - Assassin's Creed: Valhalla ❯

Add a comment from Batman: Return to Arkham review