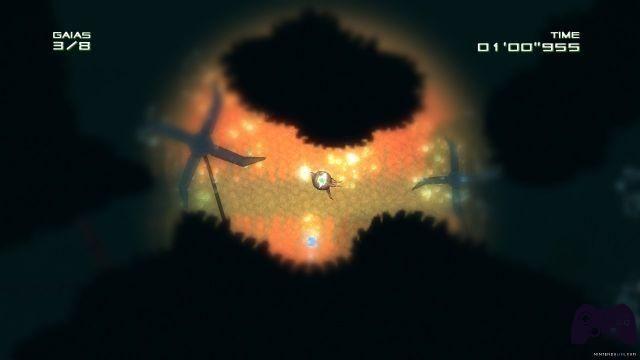 Over the years, narrative within the videogame world has undergone an evolution that has made it pass from one opposite to another: if at the dawn of the industry it was the prerogative of a few genres and was usually "confined" to the pages of the manual of the instructions with the passage of time has acquired more and more importance, up to nowadays being the predominant aspect in some productions. EnjoyUp Games with Abyss tries (or it would be better to say try again, given that we are talking about a re-proposal of a title released as DSiWare in 2012) to rewind the hands of the clock and return the plot to the booklet, leaving all the attention inside from game to gameplay, all at an App Store-style price (€ 1,99). Will it be worth "paying the ticket"?

Did you hear about Pluto?

The events are set in the year 3024: the natural resources on Earth are rapidly running out, endangering the entire human race. ANSAN thus decides to go in search of new energy sources by searching the seabed, thanks to the construction of a bio-mechanical robot called Nep2no and able to withstand the pressure that characterizes the abyss. The research bears fruit, bringing out a new resource (codenamed Gaia), which manifests itself in the form of stones.

The aim of the player, placed at the controls of Nep2no, will be precisely to collect the stones that contain the Gaia (6 in the Missions mode, 8 in the more difficult Dark mode) scattered on the freely explorable map and then head to the recovery point at the end of the collection. . To do this it is possible to act on the four main buttons of the GamePad (A, B, X and Y) to operate the Nep2no tentacles and make it move, orienting the movement with the d-pad or the analog stick. The challenge is to use this small moveset in the difficult task of moving the robot without hitting the walls of the level (and, from mission 7 onwards, the obstacles that will populate the map in massive numbers) fighting against gravity that constantly drags him down. Each collision will cause Nep2no to enter a sort of danger mode for a few moments, and if any other object is hit in this time window, the robot will go into a premature end (forcing the player to restart the mission from scratch). To complicate matters further, the light that illuminates the seabed takes care of it: in fact, if initially Nep2no is able to illuminate and make a fairly large area visible, instant after instant, the light emitted by the machine will fade, restoring only when a stone of Gaia is collected. In short, the result is a simple gameplay in the mechanics but capable of making the challenge rewarding (and sometimes even resulting in total frustration), where precision in movement and speed are required to escape the ever-looming darkness and gravity. Everything is then seasoned by the presence of rankings, unfortunately only local, which record the best times for completing each mission.

Do you know what the definition of insanity is?

In addition to the 12 missions that make up the main Abyss mode, it includes three other extra modes: the multiplayer mode, present immediately and as for the local rankings only, allows you to challenge another person in a race where the first to collect the stones wins. containing the Gaia (or in the event of the death of one of the two players, who survives), also offering the possibility of using “one screen each” thanks to the GamePad. By completing the Missions mode you will gain access to the aforementioned Dark mode, where the stones to be collected are 8 and the challenge level is even higher. An arcade time attack mode then completes the offer, which therefore appears decidedly nourished (especially if in relation to the low price of the product), even if perhaps a little too repetitive.

On the technical front, with the exception of a collision management that is not always punctual which occasionally "forgets" to start the danger mode of Nep2no, there are no particular problems, also thanks to a technical sector that is quite effective in depicting the darkness of the seabed but certainly not very demanding in terms of resources. On the other hand, without infamy and without praise, the sound, composed of a few tracks capable of giving only a couple of high notes for the whole experience.


Verdict 7/10 Your neighbor's algae seem greener to you, you know Comment Abyss is a title in the strings especially of a certain type of user, that made up of players capable of appreciating a product (never as in this case) old school and capable of give satisfaction thanks to a satisfying level of challenge but which in some situations also easily comes to frustration. However, thanks to the price range in which the invitation is positioned, it can also be extended to other types of players, always keeping in mind, however, what are the characteristics of the sea creature of EnjoyUp Games. Pros and cons ✓ Multiplayer makes good use of GamePad
✓ Low price
✓ Challenging level rewarding ... x ... But capable of leading to frustration as well
x Local multiplayer and leaderboards only
x Some problems with collisions

Do you want to be a video game expert and know all the tricks, guides and reviews for your video games ? Holygamerz.com is a group of video game fanatics who want to inform you about the best tricks, guides and tips. We offer you the best information to be a reference in gaming, so here you can find guides, tricks, secrets and tips so you can enjoy your games to the fullest. Are you ready to get all the achievements of that game that you resist so much? Enter now and enjoy your favorite video game to the fullest!
Review Professor Layton Vs. Phoenix Wright: Ace Attorney ❯

One Piece Pirate Warriors 4 review, review of a story