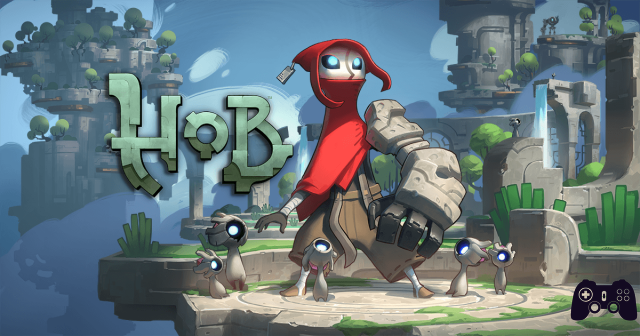 Wait for the very promising title of Runic Games, Hob (coming just tomorrow), it made us hungry for “Zeldian” titles. The ingredients of this dish, created 30 years ago by multi-starred Kyoto chefs are adventure, action and puzzles, wisely amalgamated and served in open worlds, without solution of continuity, be they 2D or 3D, in which their discovery goes hand in hand with the growth of the character. This recipe has given rise, over the years, to many titles of this genre, some of which have been able to match and reinterpret the Nintendo formula. Runic Games, without awe, is about to dive into this way of understanding the video game, and in the meantime we have stuffed ourselves with 8 games that contain in them the essence of "dynamic adventures", as they are called in the academic world. Good adventure everyone!

The Legend of Zelda: Breath of the Wild

Let's start with a bang, in an article where we also list the shameless clones of The Legend of Zelda, we could not fail to recommend what is (for the moment) among the best games of 2017, and among the best chapters of the brand: Breath of the Wild. We have already praised the title in the review. The largest Hyrule ever, which changes to never change, can only enchant you and make you want to isolate yourself from the real world, to access the fictional and violent one of Link's latest adventure. Now that the Nintendo Switch library is starting to grow, it's a good opportunity to also recover Breath of The Wild, in case you haven't played it yet.

The Legend of Zelda: Breath of the Wild - Nintendo Switch
On amazon: 56,99 € buy

Majin and the Forsaken Kingdom

Save the world from a dark calamity, get help from a huge Majin and gradually obtain new powers that will allow us to bring balance to the kingdom. This is the description of the adventure of Tepeu, the young protagonist of Majin and the forsaken Kingdom, sleeper hit by Bandai Namco Entertainment of 2010, at the time available on PlayStation 3 and Xbox 360. Past the nsordina and unknown to most , Majin and the Forsaken Kingdom brought some Zeldian vibe amid the countless FPS that had swamped the market. And most of all, he took it out of a Nintendo console.

Shut up and take my money!
purchase

If there is a game that combines the two points of the title of this plank, it is definitely the first Darksiders. Class of 2012, and with Joe Madureira's pencils behind us, Vigil Games put us in the shoes of Guerra, one of the Horsemen of the Apocalypse, framed for an unspoken crime and forced to rehabilitate himself. The influence of Zelda (and Metroid) on the first Darksiders is obvious, but the war against angels and demons is capable of giving really good moments, although it is not without flaws (as we have seen in the two reviews dedicated to it). Waiting for the third chapter, now in development, you can recover Darksiders in its Warmastered Edition, on PlayStation 4, Xbox One, PC and Wii U.

The Legend of Zelda: A Link to the Past

And together with Breath of the Wild we could not fail to mention A Link to the Past, the one that after years, is still the best 2D chapter of the Nintendo series. A Link to the Past brought a whole series of introductions to the series, which from then on would be the basis for the future. A chapter that, played today (perhaps on the Super Nes Mini coming this Friday) is still fresh and exciting. a real definition of immortal game. It was therefore impossible not to mention it, even if minimally, within our list.

To learn more:
Relegation - The Legend of Zelda: A Link to the Past

11 years ago, Hideki Kamiya, at the helm of Clover Studio under the aegis of Capcom, created what is perhaps the title that most of all embodies the love for the Link saga (it's no secret, Kamiya was inspired to A Link To The Past to co-define this project), also managing to surpass the master with brilliant ideas, a moving story and a graphic style of a Japanese painting in perpetual movement. Simply one of the best adventures ever, stuck in a loop that will see it reincarnated in the umpteenth HD re-release on December 12th, a perfect opportunity for those who have missed it so far, yet another blow to the heart for those who would like to see it return to the hands of the its creator.

Heart Machine, infinite love for the classics to be exploited to give a future to 2D. Hyper Light Drifters mixes (still him) A Link To The Past and Diablo with one of the most beautiful pixel art ever seen, futuristic in its 80s bases and adventurous gameplay but definitely leaning towards the action side, with an elegant combat system , versatile and fluid that gives a new dimension to the genre to which it belongs. Who said you can't create fresh products starting from classic bases like the columns of the Parthenon?

Now almost impossible to find in its original Game Boy Advance cartridge, Boktai is today one of the most brilliant titles ever, developed by Konami under the watchful eye of a Kojima-san as a producer. Thanks to the photovoltaic sensor on the cartridge, the game and the sun (the real one that “kisses the beautiful”) are able to interact, creating a synergy that breaks through the fourth wall, influencing the virtual world in incredible ways. From the protagonist's solar-powered gun to the need to illuminate the dark dungeons populated by monsters and vampires (the protagonist's true goal) to fight and solve puzzles, the title is a constant surprise. Unique, inimitable, ecological.

Back in the limelight thanks to the apparently incredible second chapter, finally presented with great fanfare at the last E3, the cult creature of Ubisoft and Michel Ancel year 2003 is a fusion between the science fiction of Luc Besson, the stealth of Splinter Cell and the wide breath of the three-dimensional "Zeldian" adventures, from which, however, he deviates so much as to carve out a space of his own in videogame history, thanks also to an unforgettable cast led by the assault journalist Jade. A new classic that never tires, to play and replay.

Do you want to be a video game expert and know all the tricks, guides and reviews for your video games ? Holygamerz.com is a group of video game fanatics who want to inform you about the best tricks, guides and tips. We offer you the best information to be a reference in gaming, so here you can find guides, tricks, secrets and tips so you can enjoy your games to the fullest. Are you ready to get all the achievements of that game that you resist so much? Enter now and enjoy your favorite video game to the fullest!
Kingdom Hearts special and the value of memory ❯

Avengers: Infinity War Special - The milestone of 10 years of stories