Super Mario 64: where to find the Stars on the Rainbow Walk

In this guide on Super Mario 64 we will see where to find all the Stars in the Rainbow Path, the fifteenth level in the game

Nintendo has recently released Super Mario 3D All-Stars, a collection for Switch of those that are undoubtedly among the most important 3D titles dedicated to the Italian plumber. The collection includes Super Mario 64, obviously released on Nintendo 64, Super Mario Sunshine from the GameCube, and finally Super Mario Galaxy from the Wii. Mario Galaxy 2 is missing, but we already know that will be added later as DLC.

The timeless chapter for Nintendo 64 in particular is considered one of the best XNUMXD platformers ever made, and the Switch version is definitely a great way to get it back in case you've never played it. In this guide we will therefore see where to find all the Stars in the fifteenth level of Super Mario 64: the Rainbow Path.

How to reach the last level of the game

The Rainbow Way is the fifteenth and last Super Mario 64 level, and features six Stars to find. Here the risk of falling into the void is even greater than with the Knocked Pendulum, and there are different types of flying enemies.

The map is composed of several structures suspended in the air, among which we will move using a sailing ship and flying carpets that run on a rainbow. The level is reachable from second floor of the Castle, past the door of 50 Stars and to the right of the clock that leads to the Pendulum Tictoccato. 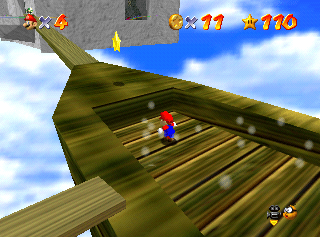 1) On a rainbow cruise: to reach the first star you just need to get to the flying ship. So take advantage of the flying carpets and be careful not to fall, and once you reach the ship you will find the Star on the bow.


2) Big house in the sky: looking around you will notice a large suspended house. Always with the flying carpets reach it, jump on top and you will find the Star.

3) Coins in the maze: Get to the area with the spinning discs, and you'll see a maze. Here you will find the last eight red coins to collect in the game, which will unlock the third Star of the level. 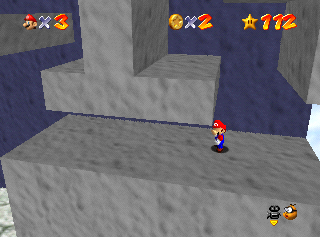 4) Swinging in the breeze: in the area with three different directions, go left, go down with the pole, and then continue to the right. From here jump between the various platforms and swings and you will reach the Star.

5) Treacherous Triangles!: from the starting area of ​​the fourth star this time go straight. At this point, use the purple switch to flip a series of platforms, which you can then use to reach the Star. 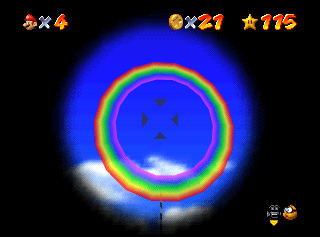 Where to find the Stars in the other levels

We hope this Super Mario 64 Rainbow Path star locations guide has been helpful! Below you can find our guides relating to the other levels of the game:

Super Mario 64: where to find the Stars in the Swallowing Desert ❯

add a comment from Super Mario 64: where to find the Stars on the Rainbow Walk