Animal Crossing: New Horizons, which animals to catch before the end of May

Fish and insects that will no longer be available from the end of May and therefore to be captured with priority in Animal Crossing: New Horizons:

How to catch May fish and insects

A bit like last month's fish, the two main players who will leave at the end of this month are "feeding" on the luck of the players.
If you've been playing Animal Crossing for a while, you may have had a chance to meet at least the oar fish during your "raids". If this has not happened, know that it is not too common a fish (the selling price is a more than eloquent proof), so you may have to "hook" a lot of sea bass before you come across one of these specimens. It must be said, however, that the shadow of this fish seems to be a little larger than that of other large fish. So, if you see a nice big silhouette in the water, it never hurts to cast the hook. Bad thing is the usual sea bass. If not, you will immediately notice that you have caught it, as, unlike the other fish, it seems that this is about to break the line (and also the Joy Con).


The other "big" on the list is the golden trout. If you are persistent enough, you will surely be able to flush her out of her hiding place. But be careful, you can only find it from 16:00 to 9:00 in the rivers of the first and second level of the island you are on (you will never find it in those on the "ground floor").
At the bottom of the list, the poor cobite, fished so many times that it has probably become an endangered species. To find it, throw the hook into a river. You will almost certainly fish either him or a boccalone (depending on the size).

On the side of insects, however, the mysterious grillotalpa, an elusive creature, not so much because it is fast (even if you have to be reactive enough to catch it), as because of its "invisibility".
You have probably heard a sound similar to that of a cricket during your game without finding, however, the source. Well, the fact is, what you are looking for is not in the air, not in the trees, much less in your head, but under your feet. So take the shovel and start digging where the sound seems to come from.
After a few attempts, you will make the infamous grillotalpa jump out of the hole, and he will start running around, looking for an escape route. In this case, you have to catch the net in the fastest way you know and catch the insect before it escapes. If you are fast enough, you will have added this little animal to your collection, which has accompanied us, hidden, from the beginning of our adventures. 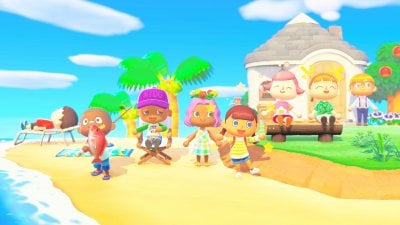 Animal Crossing: New Horizons, which animals to catch before the end of March ❯

add a comment of Animal Crossing: New Horizons, which animals to catch before the end of May