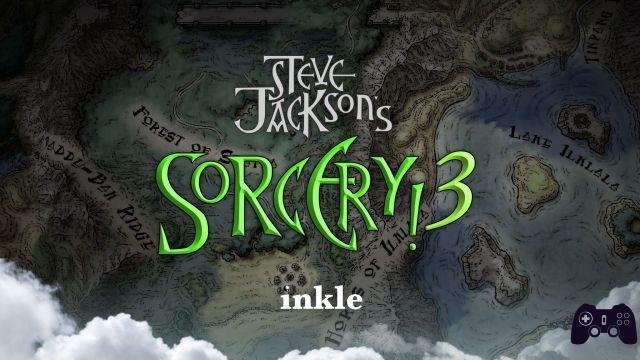 After the very pleasant interlude consisting of 80 Days, the English developer loom finally comes back to charge with Sorcery! 3, new episode of the saga of adaptations taken from the homonymous series of game book written by Steve Jackson. in last episode we had left the Analander, our hero / heroine, struggling with Kharé, the city of traps, while with this third chapter we will explore the cursed lands of Baklands, moving ever closer to the final confrontation with the fearsome Archmage.

Sorcery! 3 kicks off exactly where the previous episode left off. L'Analander, hero charged with recovering the mythical Crown of Kings and defeating the machinations of the evil Archmage, has passed the magical gate of Kharé, and heads towards Xamen, the Archmage's center of power. On its way, however, there are Baklands, lands devastated by a terrible curse, as well as i Seven Snakes, servants of our sworn nemesis. The Seven Serpents have heard of our mission, and are rushing to Xamen to warn the Archmage of our arrival. The goal this time will not only be to cross the dangers of the Baklands unscathed, but also to search for and exterminate the Seven Snakes before they can bring their message to its destination. In case of failure, our chances of success in the future fourth and final chapter would in fact be drastically reduced. At the first start of the game we will have the option to load the save of the previous chapter, importing every equipment in our possession, but also various choices made in the first two episodes. Alternatively, there is the possibility of starting the adventure even without importing previous saves, to allow newbies to get closer to Sorcery! 3 without too many hesitations, even if the knowledge of the first two games is in the opinion of the writer strongly recommended.

So Sorcery! 3 revolutionizes a genre

The feeling of familiarity of the first moments, unchanged is the graphic aspect, as well as the interface and the game system, however, soon leaves room for the biggest novelty introduced in this third chapter. If in Sorcery! the adventure was quite linear and in Sorcery! 2 we began to see a beginning of approach to alternative paths, Sorcery! 3 is the first fully "Open World" game book in history. This time we will in fact have the possibility to move almost completely freely, no longer on fixed tracks. In the same way, events and encounters with characters and antagonists will no longer be as strongly scripted as in the past, but can take place in different moments and places. This change to the structure of the adventure increases thescouting and experimentation by the player, who will have to put all his inventiveness and all the skills in the arsenal of the Analander to the bottom to discover locations and weaknesses of the snakes. Inkle developers have heavily reworked the source material this time, introducing a time travel component and adding a large number of events and characters not present in the original books. All the additions integrate seamlessly into the world and story of Sorcery !, and contribute to transforming what was initially a generic and banal saga into a universe from rich and fascinating lore and background. The mechanics related to combat, gambling with the "swindlestones" and magic return almost unchanged, even if, while in the previous episodes more than half of the player's magic library was inaccessible due to lack of key objects, in Sorcery! 3 we will finally be free to use some of the most bizarre and powerful spells of the series. This, combined with the fluid structure of the adventure, allows the player to experience a large number of different solutions to the various obstacles present in the Baklands. The degree of freedom granted to the player is literally impressive, especially when compared with other such titles. Clearly all the limits of the case remain, with a gameplay that is interactive, but which provides for the reading of large quantities of text, and a localization only in English, which in fact prevents the use of the title to all those who do not have adequate confidence. with the Anglo-Saxon language. This makes Sorcery! 3 a title not for everyone, and potentially even more niche than 80 Days, given that the knowledge of the previous episodes is yes not required, but still essential to fully appreciate the incredible richness and depth of the setting and the lore.

The enormous freedom of play granted by Sorcery! 3 results in a almost infinite replayability. Not a single adventure is identical to another, and with each subsequent game the player always uncovers new information and mysteries of the Baklands. Taking up the idea behind 80 Days, Sorcery! 3 keeps track of the days it takes the player to reach the conclusion, and this represents a further stimulus to replayability. Note a quite challenging degree of difficulty: defeating all seven Serpents in a single pass is not exactly simple: a fair amount of exploration will be required to steal all their secrets, reach their locations and face them in exciting duels. It is possible to complete the adventure even without completing the extermination of the seven beasts, but we will be notified that the Archmage is now aware of our arrival, so the most perfectionist player will be encouraged to do better and explore again and again. the magical and terrible world of the Baklands. From a technical point of view we are faced with a realization perfectly in line with the previous episodes. The style is once again the one from fantasy book illustration: our character, made as a drawn outline, will move on a polygonal map, which the view from above will make it almost appear two-dimensional. Self at first glance the title does not particularly strike the player, there are many small goodies that the most attentive will notice: for example the transitions and graphic effects when a certain area passes from one time zone to another. Of exquisite workmanship are the illustrations that accompany the whole, with a pleasant 80s feeling. As for the sound sector, while much of the title relies on ambient sounds and noises, some songs created by Laurence Chapman, acclaimed composer of 80 Days, as well as the evergreen main theme of Sorcery !, taken from previous episodes.

Verdict 9/10 Bewitched by Sorcery! Comment Combining the strengths of the first two Sorcery together! and 80 Days, Inkle has succeeded in giving birth to the best game-bookgame ever. Open World, interactive like never before, full of choices, possibilities, options, as well as background and lore, Sorcery! 3 is a delight to play and read. Its very structure encourages countless replays, with ever new and different situations. There are no real weaknesses in the playful offer of this third episode, only the warning that it is a title obviously not suitable for all palates. But if you love game books, the fantasy of a few decades ago, or just if you are the type of player who loves reading every single note, exploring every single inch and immersing himself in the lore, Sorcery! 3 is the title for you. It will be difficult for Inkle to outdo himself once again with the next and final episode. Pros and cons ✓ The first Open World game book
✓ Endless possibilities
✓ Fascinating world with a very deep lore
✓ Very high replayability x It's a very niche title
x An excellent knowledge of English is mandatory
Do you want to be a video game expert and know all the tricks, guides and reviews for your video games ? Holygamerz.com is a group of video game fanatics who want to inform you about the best tricks, guides and tips. We offer you the best information to be a reference in gaming, so here you can find guides, tricks, secrets and tips so you can enjoy your games to the fullest. Are you ready to get all the achievements of that game that you resist so much? Enter now and enjoy your favorite video game to the fullest!
News Hatsune Miku: PDFT DX - debut trailer released ❯