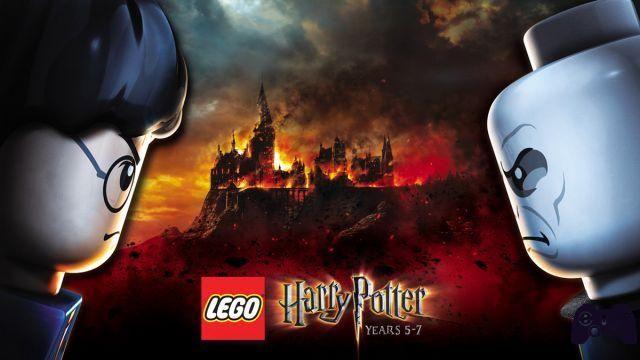 Let's face it: there are occasions when we have all felt the need for an appeal spell. Personally speaking, I would have liked to have been able to shout "ACCIO!" and see my copy of LEGO Harry Potter: Years 5-7, without having to go through a late courier, but let me tell you a simple observation: the wait was really worth it.
Once again, Traveller's Tales and Warner Bros Interactive Entertainment succeed in the far from simple enterprise of merging one of the most engaging sagas of recent years with the possibilities of play and mechanics offered by small colored LEGO blocks.
And maybe, melt, is not exactly the right word ...

Another brick in the wall… of Hogwarts!

Never as in this case would it be more appropriate to speak of "interlocking", since this is what is the basis of LEGO Harry Potter. From the very first moments of the game, even before the appearance of any menu, it is clear how the two main souls of the game (the saga created by Johanne Rowling and the world of Danish bricks) go to compose a single, large mosaic without smudges or elements uncomfortable.
At the level of game mechanics, things do not change compared to the predecessor, Years 1-4, of which this latest effort of Traveller's Tales seems more an expansion than a sequel: the settings remain almost unchanged, in their surprising fidelity to the cinematographic transposition of the Anglo-Saxon magician saga, and even the gameplay does not undergo too many variations. Once again we have a spell wheel to choose from, the ability to move independently with a sort of viewfinder on the screen, or to rely on the "halos" of magic that appear on certain usable objects.
But this simplicity is the strong point of the series: in terms of playability, what we have in front of us is a large box with thousands of small bricks and characters at our disposal, almost all controllable and diversified, just waiting to be embedded in the right position to create something spectacular, which sometimes advances the story, sometimes rewards the player with extras, and other times it's just fun to watch. And the quickest way to do this is to use the wand ...

From the point of view of longevity, LEGO Harry Potter: Years 5-7 is immense: the main plot, divided into chapters, already alone offers at least ten to fifteen hours of play, assuming you already have a good smattering of what to do, which character to use to solve the proposed puzzles, and a certain aptitude to get out of thought patterns (moving in a world of interchangeable bricks, in which the use of magic makes even the most absurd situations plausible, means having to get used to using spells suitable for transforming a wall into a staircase, a chair into a vacuum cleaner, a car into a bridge and so on ...).
But the real dimension of greatness is given by the possibility of replaying the levels completed by passing through one of the two main hubs of the game, Diagon Alley (the other is the Hogwarts castle): in fact, we will not always be able to immediately access the various areas. , and this not only for plot reasons but also because in a mission, for example, we may not have the right character, whose unique abilities could open a new path, or get us a piece of Hogwarts emblem, or a precious block. gold. Passing through Diagon Alley, however, we will temporarily interrupt the main plot, to be able to replay areas already exceeded, with the possibility of choosing which character to use among those that we will have unlocked, both by progressing in the story and by buying them in the shops for wizards.
If we add to this the fact that almost every single character that appeared in the saga narrated by Rowling is usable, and that multiple versions of them often appear, it should be enough to give a vague idea of ​​the commitment lavished by Traveller's Tales.

Another of the possibilities offered by the vastness of the game is that it can be faced simultaneously by multiple players in split screen, thus speeding up the completion of the levels, but also the AI ​​of the computer-controlled characters in the single game has been improved: while in Years 1-4 it could often happen that you find yourself with an NPC who, instead of standing on a switch, decided to follow the player-controlled character, or stop using a necessary spell at the wrong time (such as, for example, lifting a platform to take the player to an elevated area, and release the spell before the top). In LEGO Harry Potter: Years 5-7 these situations have been greatly reduced, eliminating in many cases the need to act simultaneously or avoiding, through better AI scripts, that the NPCs move autonomously to the wrong place (this, in the previous videogame, amounted from time to time to the accidental death of characters not actively controlled as a result of too short jumps or obstinacy in wanting to hit a bush of the devil's trap to follow a character immediately above it).
In short, no more frustration from AI with suicidal tendencies, but a pleasant experience of exploration, with the feeling of being perfectly in control of everything we need.

One thing that is particularly noticeable as the change between HP 1-4 and 5-7, while maintaining the same graphics engine, is the least amount of chaos on the screen. In the first, almost everything we could look at was destructible / interactable / suitable to be targeted by some type of spell (including people), but among the tide of coins, necessary to unlock extras, halos of magic that indicated the possible. use of spells everywhere, fragments of objects so dissected into bricks as to be unrecognizable until reconstruction, or pieces of shattered structures that were slow to disappear, the scenarios soon tended to resemble the effects of a hurricane passing over LEGOLand.
Fortunately LEGO Harry Potter: Years 5-7 remedies this, in part by increasing the amount of objects rendered in realistic graphics and therefore perfectly recognizable by their function, in part by eliminating the need to light every single candle, move every single tapestry, demolish every single table and so on to find coins and / or pieces of golden emblems and blocks.
Obviously, this does not mean that exploration is reduced in LEGO Harry Potter: Years 5-7 but, rather, that it is facilitated by the possibility of better understanding what we are going to interact with.

As for the audio sector, LEGO Harry Potter: Years 5-7 remains faithful to its concept of "absolute fit": the music fits perfectly into the atmosphere, passing from the main theme of the saga, used in the halls of Hogwarts, to the various more or less dark sounds depending on the occasion (don't expect particularly cheerful tones from Harry's nightmares). There is never a forcing or a blatant sound detachment that makes the lips twist, and everything seems to be part of a harmoniously designed structure.
Obviously until you get to the cutscenes ... Like its predecessor, even Years 5-7 is not dubbed and relies on the expressiveness of the characters to tell the story, placing the accent through growls, grunts, or grunts depending on of the mood of the protagonists of the scene. Without simplifying or changing the scene too much, it is brilliant to see how Traveller's Tales managed to give the right framing to the animated sequences without the use of a single, single word of complete meaning ... Unfortunately, in some parts, this attitude you seem to go against itself, trying to forcefully insert some hints of speech, which result in some, fortunately short, sequences of mumbles and grumbles that sometimes clash with the humor and the theme of the scene.

Speaking of "painful" notes (even if not in the strict sense), it is appropriate to say that the brilliant choices of Traveller's Tales as regards the ways in which to tell the story, are both a strength and the biggest flaw. of the game.
LEGO Harry Potter is not a series for everyone. The animated sequences, although they do their best (and in some cases they succeed great, believe me) to tell the story of the English magician in a simple, immediate and intuitive way, are often quite short, small flashes on the salient points of the plot and nothing else, sometimes also narrated with an outline of irony that does not always allow an easy understanding for a layman of the saga. Furthermore, LEGO Harry Potter: Years 5-7, having much more meat on the fire than its predecessor, needs a much broader smattering to be fully enjoyed, otherwise it risks appearing as a long sequence of facts (very well narrated, for heaven's sake ) without major claims of continuity.
In some cases, moreover, just the graphic simplicity turns out to be a limiting factor, in combination with being strongly aimed at fans of the series: although the developers have done a great job to characterize the characters, apart from some so unique as to be recognized. on the fly (Harry, Voldemort, Snape and Moody, just to name a few), others turn out to be rather anonymous, or linked with some difficulty (personally, speaking as a Rowling enthusiast, I still had a bit of trouble identifying Luna Lovegood as such, up to the sequence with the Thestrals).
However, the humor, albeit more mature than the predecessor, with which the cutscenes and the general setting are treated, may be enough to keep players glued to the screen: I must admit that Ron's tendency to be beaten up in almost every single appearance (replaced often and willingly by Harry in this role when circumstances require him to leave the scene), although deviating from the basic plot, is effective in rendering the character and his intrinsic comedy.

Verdict 8/10 Throwing stunners at anything that moves has never been so fun Comment LEGO Harry Potter: Years 5-7 shows up on the shelves not as a retelling aimed at the little ones (as some might think), but as the exact opposite: a fond homage to the series, which needs a certain maturity to fully understand its nuances. More serious and gloomy than its predecessor, it seems to have reached a more adult stage, taking an example from itself and improving itself: continuing the comparison with the bricks it is made of, LHP Years 5-7 is a game that yes here and there has some relative imperfections, which can vary from strengths to disadvantages depending on the type of user, but it is also much more than that if looked at in its entirety. Just as the individual Lego bricks, by themselves, are only tools entrusted to the imagination of those who use them, but once you have built something great this is such for everyone, even the videogame counterpart is not far behind, managing to be as a whole a pleasant experience beyond all expectations. Pros and cons ✓ Simple, intuitive but fun
✓ Improved AI compared to the prequel
✓ Massive longevity x Mainly suitable for fans of the literary series
x Sometimes visually chaotic (less than the prequel)
Do you want to be a video game expert and know all the tricks, guides and reviews for your video games ? Holygamerz.com is a group of video game fanatics who want to inform you about the best tricks, guides and tips. We offer you the best information to be a reference in gaming, so here you can find guides, tricks, secrets and tips so you can enjoy your games to the fullest. Are you ready to get all the achievements of that game that you resist so much? Enter now and enjoy your favorite video game to the fullest!
Mario Party Review: The Top 100 ❯