Will Huawei MatePad 10.4 and MatePad T be the next two mid-range tablets?

Huawei MatePad 10.4 is the protagonist of some rumors. A leaker has released the possible technical specifications of this new one tablets di middle band. In addition, there is also talk of another entry-level or mid-range device, perhaps recognizable by the name of MatePad T.

The interesting Huawei MatePad 10.4 could include a  with a resolution of 2.000 x 1.200 pixels. Present an 8 MP rear camera and a front one with the same definition. The tablet should not miss a USB Type-C port, compatibility with Bluetooth 5.1 and a good battery 7.250 mAh. 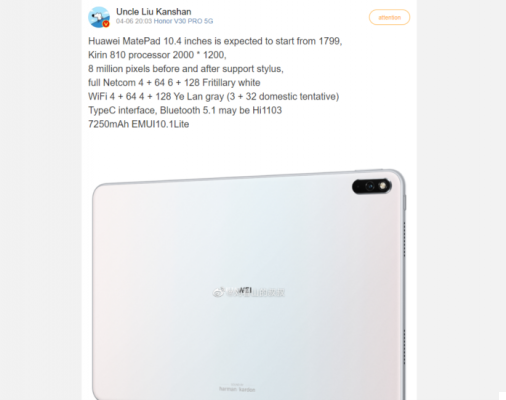 Under the body there could be the SoC Kirin 810, a platform with 7 nanometer manufacturing process and Arm Mali-G52 MP6 GPU. As for the available versions, the leaker mentions:

The starting price could be 1.799 Yuan (ie 234 € approximately). The leak has not yet been confirmed or denied; We just have to wait. Furthermore, Evan Blass stated that Huawei would also be working on a low- or mid-range tablet, equipped with fairly wide bezels. His name could be MatePad T.

On the web it emerged that this device has already obtained certification Wi-Fi Alliance. It appears in the database with five different codes, which could refer to the Wi-Fi, LTE and 5G variants. A MatePad T was already launched in 2017, but the manufacturer is unlikely to not want to review the dated one hardware (Snapdragon 425, 2 GB of RAM and 16 GB of internal memory). Just a few months ago, Huawei officially unveiled MatePad Pro, a possible rival of Apple iPad.

The Huawei Mediapad T5 tablet, with a 10,1-inch FullHD display, is available for purchase on Amazon.

Xiaomi, Mi MIX 4 is not in the pipeline but these other innovative technologies are

How to update an Amazon Kindle

How to enable HDR on Roku TV

OnePlus Z does not disappoint: here are the hypothetical specifications

add a comment of Will Huawei MatePad 10.4 and MatePad T be the next two mid-range tablets?