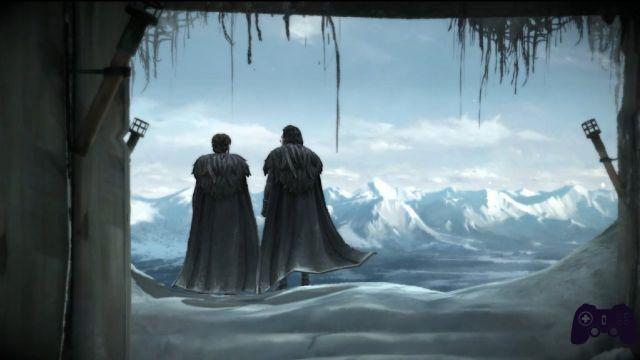 Dopo un great first episode the guys from Telltale throw us back into the raw world imagined by Martin with this second installment of Game of Thrones. Will the (mis) adventures of the Forrester family be able to hit like in the first chapter, or was it just a lucky debut? Let's find out in our review of Game of Thrones ep. 2 - The Lost Lords.

"The Lost Lords" pushes his foot on
narrative accelerator

After the events narrated in "Iron from Ice", this second episode dedicated to the Forrester family stages a greater number of characters and different settings thanks to some choices made in the previous chapter. Here they will then appear new usable protagonists who will contribute to the fight against the Bolton family and who, thanks to their charisma, will soon enter the hearts of the players right away. The Lost Lords, in fact, succeeds in confirming theexcellent characterization of the characters present in the first chapter, but pushes the foot on the accelerator of the narrative thanks to continuous scene changes (characteristic of both the novel and the TV series), multiple twists and a couple of moments of the highest level. We are sure that those who enjoyed the adventures of the Forresters in the first episode of this videogame series, can only be satisfied with the development of this second act and that, once the adventure is over, the desire to get your hands on the third chapter will present itself stronger than ever.

You look, but you don't play

Once again the gameplay of a Telltale stock was largely sacrificed to make room for a narrative flawless and flawless. Despite some particularly interactive scenes (Asher's first fight and the training of the Night's Watch), this second episode proves to be devoted almost entirely to history, limiting the movements of the characters to simple corridors to go and almost completely eliminating the interaction with the environment. Once again, in fact, the main characteristic of the boys of The Walking Dead and Wolf Among Us is shown to be theinteraction with characters e the possibility of relating in different ways with all of them, guaranteeing us friendships and enmities of a certain narrative weight. Never as in this series of Game of Thrones will we feel guilty for some choices made and, thanks to these troubled decisions, the identification of the player within the story will be able to reach truly commendable heights. Some choices made in the previous chapter, Furthermore, they will begin to have some weight in this episode, but it is evident how the boys of Telltale are continuing to add meat to the fire to surprise us in the second part of the adventure. Anyway the longevity of The Lost Lords manages to keep around 3-4 hours, thus demonstrating an excellent duration / price ratio and keeping in line with the first chapter of the series.

Il technical sector of The Lost Lords, once again, does not prove to be the strong point of the production due to uninspiring polygonal character models and a blur filter used for some backgrounds which, in some moments, shows itself really invasive and devoid of any real meaning. OttimoInstead, the sound profile which, thanks to well-chosen music (with a particularly successful track) and ad a dubbing of the highest level manages to involve the gamer and catapult him into the story. A special applause should also be made this time to the opening credits that, by merging the fabulous soundtrack of the TV series with the visual style of the game, manages to recreate an excellent atmosphere that, right from the start, we are sure will be able to conquer the fans of the series written by Martin.


Verdict 8.5 / 10 The sky is increasingly blurry Comment Once again Telltale has managed, despite the unchanged defects related to its series, to convince us, excite us and make us wait anxiously for the next episode. The gameplay has been set aside even more to make room for multiple dialogues, choices and characterization of the characters that, right from the start, it will be impossible not to love. Obviously this is a title recommended for lovers of storytelling and not for those looking for solid and nuanced gameplay, but if you loved the other series of this talented software house you can buy the season pass with your eyes closed. Pros and cons ✓ Stellar storytelling as always
✓ The weight of some choices is felt
✓ Spico soundtrack x Nowadays, very little is played
x Technical sector dated
x Lack of localization in Spanish

Do you want to be a video game expert and know all the tricks, guides and reviews for your video games ? Holygamerz.com is a group of video game fanatics who want to inform you about the best tricks, guides and tips. We offer you the best information to be a reference in gaming, so here you can find guides, tricks, secrets and tips so you can enjoy your games to the fullest. Are you ready to get all the achievements of that game that you resist so much? Enter now and enjoy your favorite video game to the fullest!
Animal Crossing Guide: New Horizons - Guide to turnips and Brunella ❯

Add a comment from Game of Thrones Ep.2 - The Lost Lords review